This Year I MEAN It, Goddammit 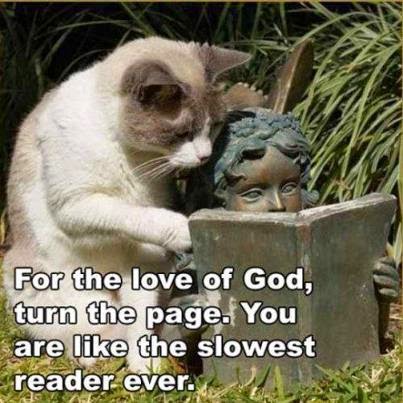 Long-time readers of this blog know of my epic battle with the huge white whale of a book, Moby-Dick. I started reading it in 2009 and have slowly, oh so slowly, been making my way through it in fits and starts ever since. My 2013 New Year's Resolution was to finish it but alas, nothing resulted but failure, utter failure, that year. And in 2014 as well. But THIS year, by gawd, it will be different!

At the moment, I am at Chapter 123. There's only 13 more chapters to go! Queequeg has carved his tattoo replicas onto his custom-built coffin. Captain Ahab has finished making his special harpoon with which to kill the great white whale. The Pequod is hot on Moby-Dick's trail but is currently in the midst of a terrible typhoon. The action is finally starting! 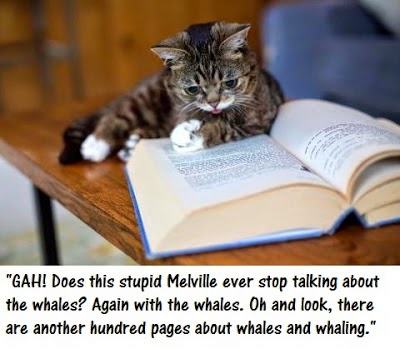 And I have a new incentive to finish the book quickly. There's a movie coming out in March called In the Heart of the Sea concerning the real-life whaling disaster in the early 1800s which inspired Melville to write Moby-Dick. I am not going to go to that movie unless I've finished Moby-Dick. And I lurves me some Chris Hemsworth who is starring in it so that is a powerful motivation to get my rear in gear and finish those last 13 chapters!

Happy New Year, everyone! Wish me luck. No, not luck -- perseverance.

Happy New Year! Seems like you got many exciting hours of reading ahead of you, haha.

Chapter 123? lawd have mercy! lol. Happy New Year Debra!. and you sure got some reading stamina!

Coincidence: I was only just rewatching the final battle between Moby and Ahab from the Peck film.

Actually, I read Moby Dick back as a teeanger, and I loved it. I've even written two stories as follow ons - one from the point of view of Moby as an old whale, many years after the events of the book; and the second, with an immortal Ishmael hunting an immortal Moby in the 21st Century.

Happy New Year. You can do it. I'm betting on you.
Mary

Good luck finishing that book this year. I have a similar experience with Dracula. Everything about that book says I should enjoy it but I never get past the first part, where we switch to the viewpoint of Mina. It's kind of funny you can't finish Moby Dick when you consider the symbolism and what the story is supposedly actually about; an unconquerable challenge that will leave you feeling unfulfilled. Of course I hope that's not the way it leaves you feeling. It'll be worth it to finally finish it.

Well that movie coming out is awesome incentive. I read the book while working at an evil company during my lunches. It's all I could take, little pieces of it while I ate my bagel with hummus. I know you can do it Debra!

Next you can read les miserables.

'tis a hunksworthy reason to finish it

I am rooting for you, although, that's too many chapters to tell a story. Sounds like an editor would have been helpful. Either way, I know you can get through it.

start reading right now!!! this is exciting and i can't wait to see it. happy new year!!!

Honey, you should have just got Cliff notes!!!!!!!! It may be a year of miracles! Happiest to you dear!

Good luck! You can do it! When I read "chapter 123" I knew immediately that I will never have the courage to start on this book :-D! Have a wonderful 2015!

You've gotten so far, the rest should be a breeze..I have to see that movie!! Happy New Year!

The ONLY reason I finished that ponderous tome was because it was part of school. It was painful as we didn't have Cliff notes in those days.

Happy New Year. Good luck with that Moby Dick! That movie does look pretty amazing so you certainly have incentive this time.

Happy New Year! May your minutes not be wasted with things like cliff notes or google searches on book endings or willy, silly naps! Persevere and be rewarded with a movie with yummy Chris Hemsworth!

I have never read that book so now I will have too because you see I always MUST read the book before I see the movie, I am just weird that way, yup, I`m checking that book out as soon as our library opens, probably Monday, Happy Happy New Year, I hope you and your family are well, and that you had a great time away,

I think it counts if you switch to the audio book. Then you can count the effort of having to fast forward/skip to the right chapter. My spouse is an English literature professor and could barely make it through that slog of a book with all its damn whale talk. Good luck.

Happy New Year darlin. If I were you, I'd get on that reading shindig today. Good luck because you're gonna need it.

Lie to me - I'll let you see the movie anyway! Fuken fish!

I would feel sorry for you if I didn't have to slog my way through that book myself. It's like Lord of the Rings...dense, dense, dense. Appreciate you saving that caption all this time.

Back in High School I wrote a lengthy (that's the way I remember it) report on the symbolism in Moby Dick. I do remember enjoying the book but don't have any desire to reread it. You have me wondering if I should check out a classic.

Chris Hemsworth is incentive enough for anyone!!!

Feel free to tell me how it ends when you're done ... I doubt I'll ever have the stamina required to finish a tome like that. :)

Push on, push on, the end is in sight and with it will come great rewards:)
like maybe you could give yourself some wine, strawberries and chocolates...
works for me.

You are so close to the end just read it all marathon style and be done with it!! Nothing like a goal accomplished to start your new year off.

Here's to you making it through to the bitter end.

I took a class on Melville. I'm quite fond of Moby Dick, but don't call me Ishmael.

Happy New Year Debra - you can do it, you know you can. Just one chapter a month and bit more and the job will be done.

A very happy 2015 to you and the Rare One! Good luck with your read...I am off to start yet another Terry Pratchett. He's one of my faves!

Happy New Year Debra ;o) You will do it ;o) I wish you luck and perseverance ;o) I think I will skip the book and just go to the movie! LOL! You should come by my blog ;o) Hugs ;o)

By the way, I hope your family is well and I also hope you had a great time away ;o)

This is it, Debra! You're going to do it. You have the motivation, so get your ass in gear. I'll come by and kick it if need be...LOL... But no need. Hey, you're much better than me. I never got through the first chapter! Happy New Year, my western friend. Looking forward to many more of your quirky posts!

Power through! You got this.

I remember trying to finish Harry Potter and the order of the phoenix which is rather similar in size to MD. Felt like forever

I know you can do it. I am proud of you for setting a goal and going for it. I mean of course going to see Thor at the movies......Chris Hemsworth is such a super incentive

Go, Debra! You can finish this by the end of the month.

Better you than me. I read War and Peace, so I felt that I did my long-ass old book penance time, you know? ;)

Chris Hemsworth is a pretty big motivator for my daughter as well! LOL. I'm glad the book is getting exciting now.

I admire your gumption, in finishing Moby Dick.
I tried years ago to read it and just couldn't do it.
The movie sounds interesting. That I could do.

Loved that book (In the Heart of the Sea, not so much Moby Dick).

In the words of many an apathetic teenager, "I physically can't with that book."

The two hottest men in the world are Chris Hemsworth and Hugh Jackman.

Happy end the book year! You can do it!

You've made it this far... you can do it!! And Chris Hemsworth is a delightful incentive! ;)

sounds like me and Ulysses.never made it past page 19..

There you go. A good disaster movie is always a great reason to finish a long-as-all hell book.

Hm... I wonder if I should reread the monster. I think my Piano Man wants to read it this year. So I just might... Don't know yet, I read about whales to last me three lifetimes the last time I read it.

Happy New Year. And read on!

Oh yes! Definitely good luck. It was required reading in my high school honors English class. Blech. It was the last read of the first semester senior year, which means we had a month. Good gawd did that SUCK!

I thought that "Moby Dick" was some kind of dude medical problem.

Good luck with the book.

Egad! That's my War and Peace. Finally I just cried "WHY???" and threw the book on the ground. Oh boy. You already do have but will double my undying admiration after you finish those last 13 chapters. :D Good perseverance to you.

Hell, I waded through Crime and Punishment; so it can be done.
the Ol'Buzzard

I read it in school.. granted slow start but totally worth it. Is worth the classic reputation it has.

Unlike all that damn Shakespeare we had to read....

Thanks for giving me a run, now I won't have to read it. I think I thought I read it, but now I realize I probably watched Gregory Peck do battle with him at some PJ party when I was a kid. Anyway, I'm rootin' for ya kiddo!

Save yourself the trouble, just read "In the Heart of the Sea" book. More action and easier to read!

I read "Ahabs wife" first and so was highly motivated to read Moby dick as background for that book. I loved it but didn't read the " what is white" chapter which, deeper meaning-wise, is the most important chapter. Ah well!