Why This Blog is Full o' Bees 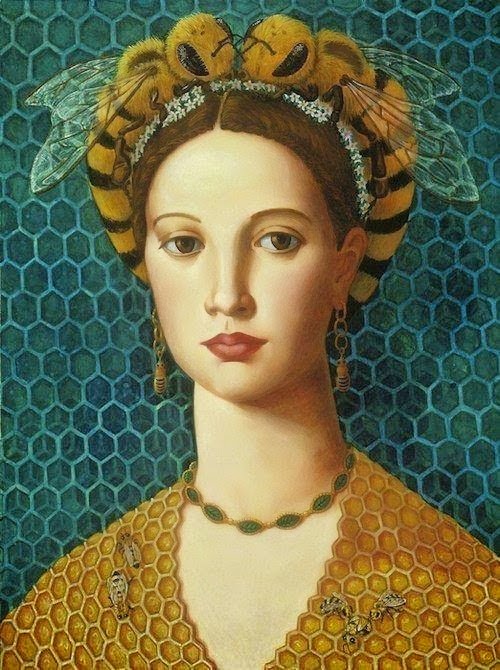 In the "Ask Me Anything" post, several questions were raised about bees. Jadedj of The Banquet of Consequences wonders about the significance of the bee motif on my blog banner and sidebar, while MonkeyME of Green Monkey Tales cheekily asks which came first, the hive or the honey? Ivy of The Happy Whisk wants to know where my love of honeybees comes from. Here's the answer --

That is the origin of the popular girls name Melissa. It means "honeybee" and connotes "priestess of the Goddess." The equivalent Hebrew name meaning the same thing is Debra, which actually is my real name (so that answers your question too, Rosemary of Where Five Valleys Meet!). I have also seen Debra translated more conceptually as "she who seeks." After all, what does a female bee spend her time doing? She seeks flowers and pollen in order to make honey. 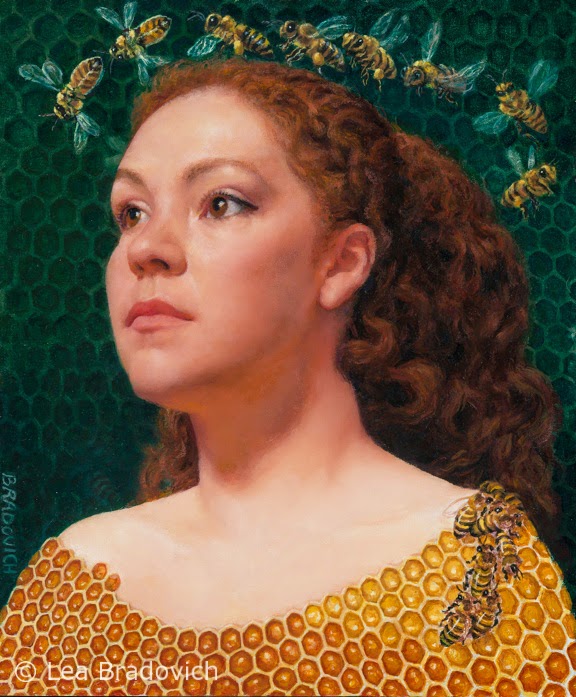 Debra She Who Seeks perfectly sums up my spiritual identity. My name honours the Divine Feminine and expresses my connection to the Goddess. And I have spent a lifetime seeking spiritual truth wherever I may find it. Like a honeybee, I have gone in turn to most of the flowers in the spiritual garden and gathered some wisdom teachings from each. So when Jane and Lance Hattatt of HATTATT and Missy George of This N That ask me what, exactly, am I seeking? -- that's the answer.

Bonus points to Jacquelineand.... of Cheapskate Blethering who correctly noted that Debra means The Bee and asked is that why you chose it?

[Note: This post is a condensed "Coles Notes version" of six older blog posts I wrote on this topic. Want to read the full version? Check out my archived posts dated December 14th to 19th, 2009.]

So, now we have it. The honeypot of spiritual enlightenment is your goal. Well, that should certainly occupy one lifetime, if not more, to achieve.

We have found this post fascinating. So intriguing to realise that there is so much in the very fabric, structure and content of your blog. Such a creative mind......we just used our name!

You would, possibly, be intrigued, if not amazed, by a fabulous building in Budapest, our favourite. It is an old post office savings bank building designed by Lechner, one of Hungary's most famous architects.A fabulous example of Art Nouveau and decorated lavishly with porcelain tiles from the famous Hungarian Zsolnay factory. On the exterior of the building, bees created in tiles, climb the walls to honeypots which are constructed on the roof. All of which was to serve as a metaphor for savers ( the bees) adding to their savings ( the honeypots) through working hard!

Bonus points? Where can I spend 'em?

Guess I'll just have to seek that answer, like a bee after nectar.

we do love bees, the world would not exist without them!

Wow, that is really really interesting. You put way more thought into your actual name than I put into my stupid internet name. Though I guess one good turn deserves another: My real last name means "to tie or to bind" in German. There, now you know something about my name. Oh, Pickleope means, "idiot adult child trying to make fun of mash-up culture."

If you were a male the drone motif might have been a problem...on two different levels.

I have such a deep appreciation for bees. They make the world go round in ways we don't even realize...

I thought it was just cause bees are awesome.

I always love looking at your Bee Pics! You find the most unique and intriguing pictures. :o) And now, whenever I see a Bee picture, or even a real Bee, I think of you.

that is utterly amazing and so very very beautiful!

Bees always ruin our outdoor champagne brunches. Whatever that means.

Wow..so very interesting and informative as well..Never would have guessed...If that's the case , I guess the "seeking" will go on :)
Thanks for enlightening us..

Always such interesting posts. I love reading your blog.

Dear Lady Debra, that (the Bee motif) we had wondered about ... thanks for sharing this "info"...
A great Wednesday to you and yours....

What a wonderful answer Debra, and how far sighted were your enlightened parents to give you such a fortuitous name.
I have a little solitary bee house and a handmade straw bee skep in my garden, somewhere for the bees to lay their larvae. I also visited a honey co-operative farm in Greece last year - we share a mutual love of bees.

Thank you. I must say your blog theme is way more thought out than mine.

Now, what light can you shed on this Big Foot thingy?

Well, that settles it all for me (smile); sounds lovely too.

A perfect name for a perfect woman!

THAT, is very cool and I thank you for taking the time to put together this post.

PS: And it's good to know that your real name is Debra.

Great history! Those paintings are quite amazing and unique too. That quest for spiritual truth never seems to end!

Yes, I too asked about you side bar before and you did answer me, but never knew about your name and how you arrived at your blog titled. Very cool, makes sensed, and very well thought out! I too love bees, they actually make me happy.

Oh, I love how you arrived at your blog name, it is perfect.
I am sure that I knew it already from the posts you mentioned, but with my poor memory, everything is fresh and new to me! :-)

Wow, I learned so much today! And hard as it may be to believe, I'm not being sarcastic when I say that. :)

Beautiful post! I love bees too. I sit out in my backyard in summertime with a book and to watch the wonderful bees work. I'm mesmerized by them.

I learned something new every day here. Debra = The Bee = very cool.

Knowing several people named Debra, I've heard of the connection with bees before, but I like the spin you've put on the idea of seeking. :)

Well, it sounds cool in my head.

One of the powerful families of Medieval Rome had honeybees on their family crest. I forget which family, nut they produced at least one of the Pope Urbans.
Maybe youi're Italian nobility and didn't even know it?

Interesting info. Bees are one of the social insects and this is a blog so that's a good match too.
"Honey Bee" by Stevie Ray Vaughan is a good blues song.

Very cool! I love the bee images, and though I'm terrified of wasps, find honeybees and bumble bees endearing...probably because I'm a honey addict. The bees are beautiful in this artwork, and inspire me to read more about them in a spiritual context.
Thanks for sharing!

Whenever I see bee pictures, or bee items like bracelets, pins and other objects, I always think of you. Buzza!

Bees are important; but as a rule I don't like to be around stinging things.
the Ol'Buzzard

I've always loved your bees! This artist has some fantastic works! So intricate and magical!

I love the bees! I sent my family a couple of your posts on them because it's our family mascot.

Anything that could make its way up my pants leg terrifies me :P

This is truly interesting..and I love, so much, that you have been seeking and learning. Thank you so much for answering my questions...and, haha...I am with Michael above....:)