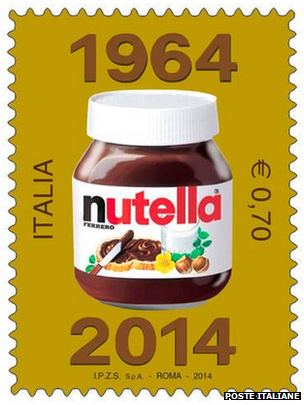 Did you know that last year was the 50th anniversary of Nutella? A banner milestone celebrated in the photo below by Michele Ferrero, Italy's richest man, the multi-billionaire maker of Nutello (and also Ferrero Rocher chocolates, Kinder eggs and TicTacs). 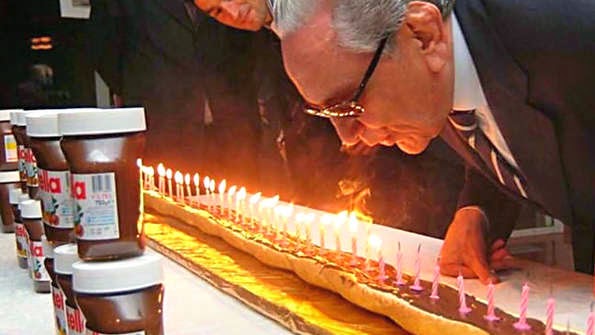 Mr. Ferrero just passed away in February at the age of 89. He's gone to meet his own maker now. Which leads me to contemplate this existential question . . . .

What would our world be like without Nutella? A thinner and healthier place perhaps, but less delicious. 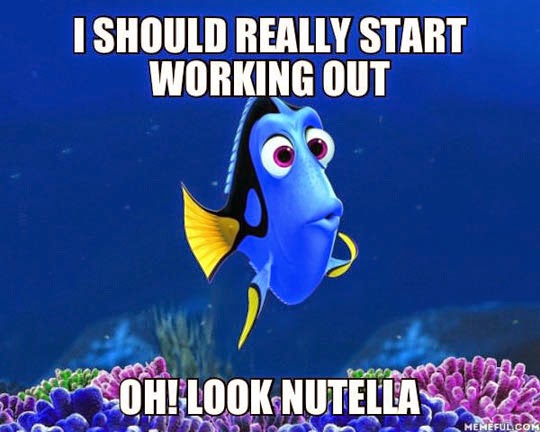 Nutella is always there for us to be our comforting friend. You know what I'm talking about.

But, believe me, we need to put down that Nutella and sloooowly back away. 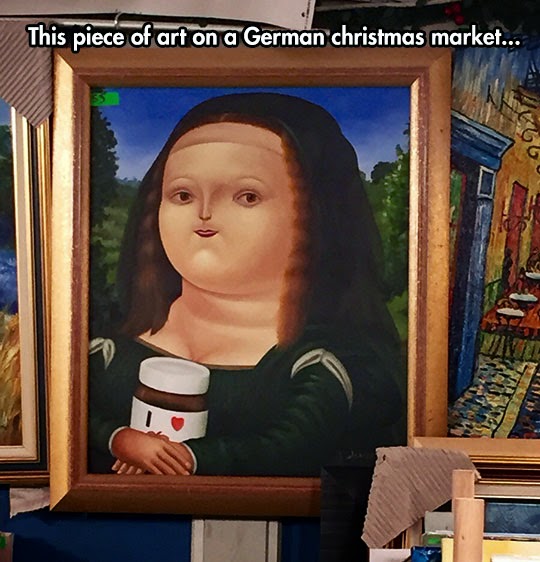 However, the marketplace conspires against us. Can you believe there's a new cookie product to replace spoons and make it even easier to eat Nutella right out of the jar? "Nutella dippers," they're called. 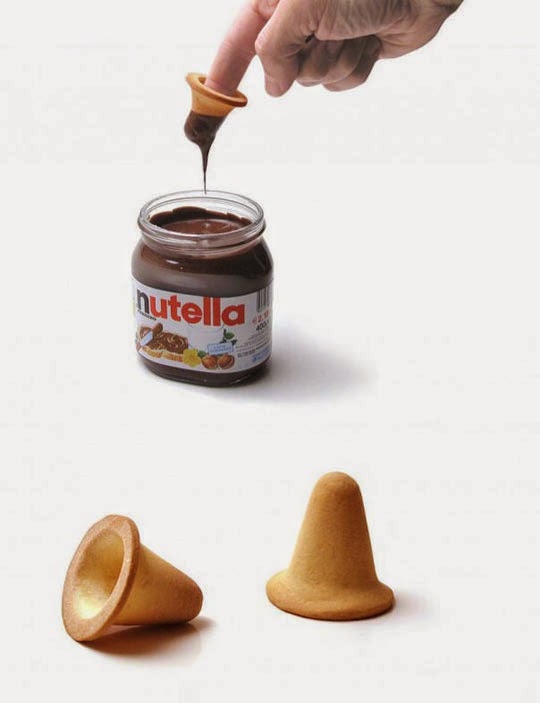 The Nutella empire just keeps on growing and expanding . . . . 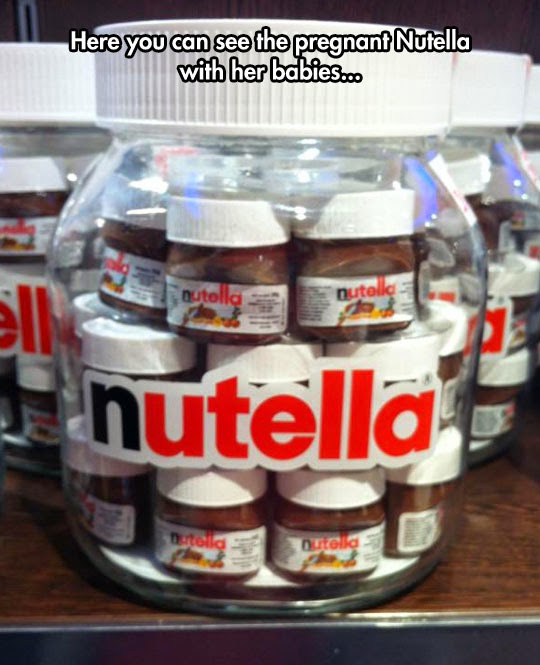 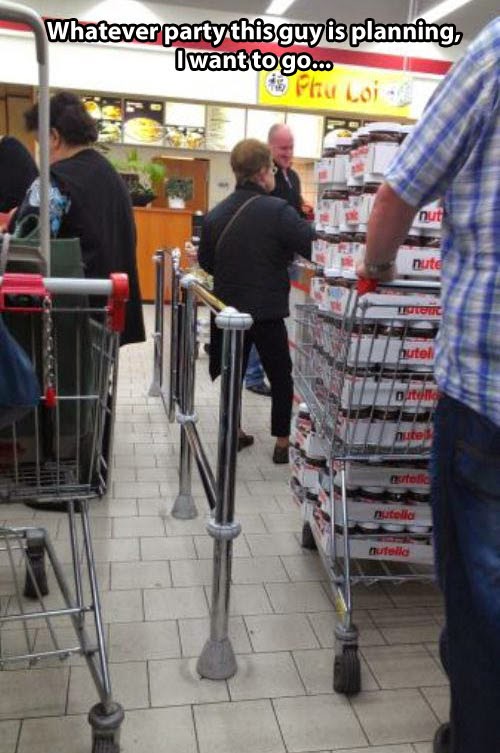 Okay so am I the only one who doesn't like Nutella? But I tell you what I hate, Ferrero Rocher chocolates!!

I'm just not that into chocolate. :D Well unless its Lindt.

Hi Deb, interesting. I have never liked nutella, nice to visit, hope you are awesome and so is the HRH.

I identify with the barbie doll!

I wanted to do a post about Nutella when I read about the man who brought it to the world. Instead, I was hoping that someone else would and you have not let me down!!
So funny.

Hahaha! This is hilarious. My girls both love Nutella. But I don't. I'm immune to the stuff :)

I love me some hazelnut and chocolate, but go figure I never enjoyed Nutella??????? I do LOVE the Ferrio Roche candy though. Talk about a fickle queen.

I was shocked when people told me USA doesn't really have much Nutella and similar products. Here in my country we have numerous similar chocolate and hazelnut spreads. Our most famous one is called Eurocrem.

Sometimes we will put a spoonful of Nutella in a wonton wrapper, deep fry it and sprinkle it with powdered sugar. LOL, not too often because it is a bit labor intensive, but man is it good!

Dippers? Cool! They'd be good for other spreads as well....

I'm not a big Nutella fan but my daughter more than makes up for me; if I need comfort sweets, then I head for the Schwarzwalderkirschtorte.

Say that three times fast, with a mouthful of Nutella.

I had no idea Nutella has been around that long!!!

not a nutella fan but your post is very amusing

I for one am very grateful to have Nutella in my life. Currently I have been adding it to mocha smoothies and just realized, I am almost out! I can't live without Nutella.

BTW, the creator of this fabulous product happened to pass away on Valentine's Day. The day of chocolate and love.

I am not a Nutella nut.

The poor man died because he never recovered from blowing out all those candles!

I like Nutella a bit but I don't buy it. My grandkids ask for it every time they come. Maybe I should get some? Two munchkins hopped up on Nutella...no thanks!

there must be something wrong with me..never tasted it...but check out the carbs and you'll see why...send me into a diabetic shock.

I love Nutella, and had no idea it's been around so long. I'd like to say I make things with it, but no. Straight from the jar. I think the dippers look like condoms because dipping into a jar of Nutella is better than sex!

Gawd it's delicious! I cannot imagine a world without it!

That man was brilliant with the invention of Nutella!!!

Never tried it. Picked it up once and almost bought it, but changed my mind. Maybe one day I'll get over my fear of trying something new.
Mary

But on the serious side, the way this product came about, because chocolate costed too much, is brilliant. And from a food writer's POV, I find it double brilliant.

I though that was a new vice..Never knew it had been around that long..

It didn't impress my taste buds much. I think it is fairly new to the American diet (or whatever we call the junk we devoir)

I'm not a huge fan of Nuetella, but Hershey's has a fairly new product (a chocolate dip) and I've been known to dip everything in it. sigh...

Ahhh nutella!!! I'd be happy to receive that pregnant nutella :)

Nutella has always been in my comfort zone...my very own comfort food.

But lately I'm craving for peanut butter instead of my old pal.

You've officially won my heart with this post. You had formerly, I just hadn't made it official.

I'd say that Mona Lisa is a lot more realistic than skinny, nutella hoarding Barbie. But alas, Barbie has brains.

Is it me or does that Barbie look like a brown haired Taylor Swift?
"Spoon it up, spoon it up!"

Such a simple thing made Ferrero so rich. Grazie mille, signore.

Our teenager won't eat it, says it has too much sugar, I was kind of surprised about that one.

I would like to go to church and find Nutella on the altar. We could dip our tasteless cardboard-like communion wafers in it. Our joy would make Jesus so happy.

I can't believe how long it took me to try Nutella. I regret those wasted years.

Have you ever had Nutella on a crepe? OMG!!!

I don't think I've ever seen a Nutella. It's certain that I've never tasted it.

We try not to have it in the house, or I would just take it and eat it all while watching T.V ;o) LOL!

I had no idea it was that old

One of my nieces is hooked on this!
I will just have to give it a try, I guess.
Hey, it may be responsible for extending one's life! 89 isn't shabby!

I'm so glad to learn that Debra is your real name, because that is how I think of you! It was interesting to learn that it mean "honeybee!" I just read two good books with bees in them: Little Bee and The Secret Life of Bees, so of course I was thinking of you! The image of the woman in the bee headdress is gorgeous!

I've caught up on your recent blogs. I've been very jerky-jerky in my blogging lately. It's a little challenging on vacation. Maybe I should have taken a complete break, but I have this commitment to my northern posts!!!

The Canadian Sniper spoof was a hoot! As was your post on netfliksing. I haven't seen house of cards yet; we brought the first season with us to Hawaii, but so far we haven't had time to watch it.

Have a lovely weekend, my friend!

In Italy we had tiny jars of Nutella with hooks built into the lid so you could hang them on your Christmas tree. Which we did - hey you should never fight local traditions.