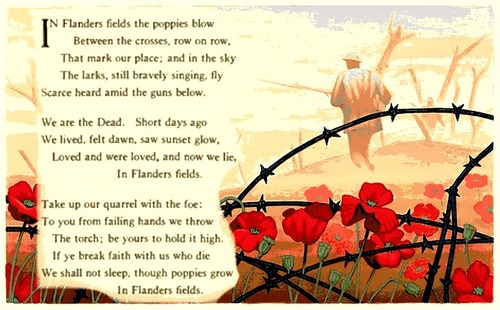 Today is Remembrance Day in Canada. Like the armistice which ended World War I, it is marked at the 11th hour of the 11th day of the 11th month. This year's Remembrance Day, however, has a special resonance for us. It is the centenary of Canada's most famous poem, In Flanders Fields, written by Lieutenant-Colonel John McCrae following the second battle of Ypres in 1915. 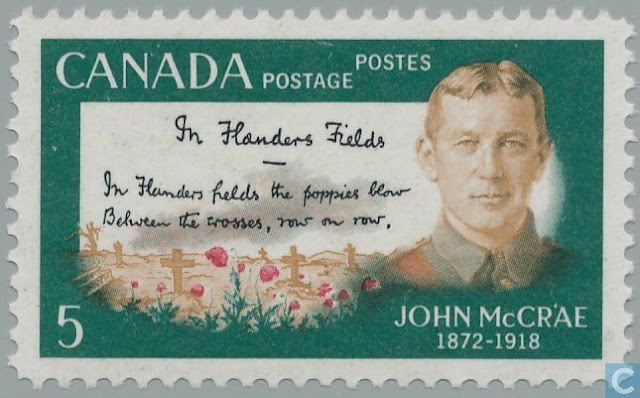 Here's a short video about the poem's history (thanks, Guillaume of Vraie Fiction, on whose blog I first saw it) --

It is said that In Flanders Fields achieved the prominence it did because, unlike the bitter and disillusioned poetry written by other famous soldier-poets of the Great War, John McCrae's poem of grief and loss was still tinged with patriotic romanticism, speaking of "glory and honour in a war that has since become synonymous with the futility of trench warfare and the wholesale slaughter produced by 20th century weaponry." (wikipedia) Certainly, the poem was promoted and made use of for propaganda purposes by the wartime governments of both Canada and Britain. 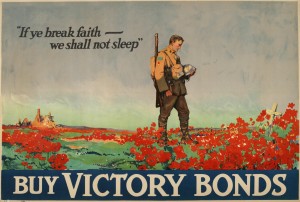 Yet, the sincerity of the poem's central focus on those who died saves it from being true propaganda, I think. While it does not challenge the institution of war, In Flanders Fields transcends its specific circumstances and touches the universal grief of war. 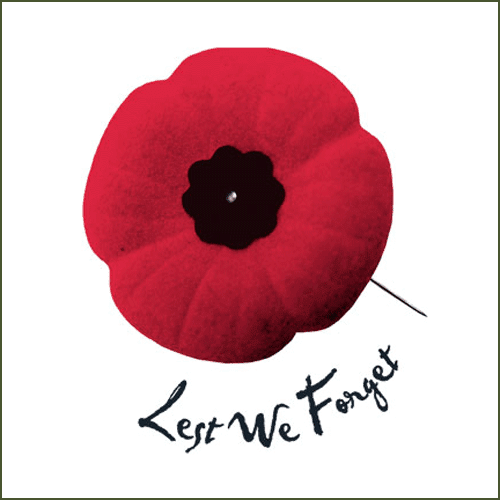 It's strange to me that so many countries "celebrate" (for lack of a better term) the armistice of World War I, yet we shortly thereafter had a World War II. So, it's almost like society forgot. Hopefully we don't forget again.

It is both ironic and sad that so much great poetry came out of the conflict of the First World War: Wilfred Owen, Vera Brittain, Siegfried Sassoon, Robert Graves, Robert Service et al. Poems that serve as warnings and sadly prophecies that went unheeded.

Each year we say Lest We Forget and it seems that once November 11th has passed we do.

it's a national, non working day here in my country. We've lost million out of six million total citizens in WW1 and then another in WW2.

Today is our Veterans day. Blessings to all who serve now and then.

When my kids were little I made them memorize this poem.

I'd be much happier if instead of people posting thank the veteran and instead adopt one or donate money to wounded warriors or other veterans groups..

When I live in Canada as a young teen, I remembered being baffled by the poppy I was ask to wear. But I also recall being introduce to that beautiful poem about loss and remembrance.

Well-done, Debra. Thanks for this.

Thank you for mentioning me! I love the poem.

Wonderful post, Debra. 100 years later, this poem continues to haunt. Every time I read it/hear it, I am filled with grief.

I agree, Debra. This poem speaks to me of the sadness and grief of war and transcends the specific time for when it was written.

Amazing how's it's been a century since the "Great War". I remember reading a story about how the last WWI veteran died who was a woman in a non-combat role, which happened a few years ago.

Oh, that poem is good.

Excellent post. All the lives lost is so sad. WE can never give enough thanks.

Thank you for posting this. We bought poppies from the VFW twice last week :)