Return of the Vikings!

YAY, season 4 of Vikings starts tonight on the History Channel! Everybody's favourite bloodthirsty bunch of savage heathens is back again for yet another round of mayhem! Well, except for [SEASON 3 SPOILER ALERT] poor Christian monk-turned-Viking Athelstan, of course. I suspect that this year Ragnar will wreak terrible vengeance on Floki for killing him. 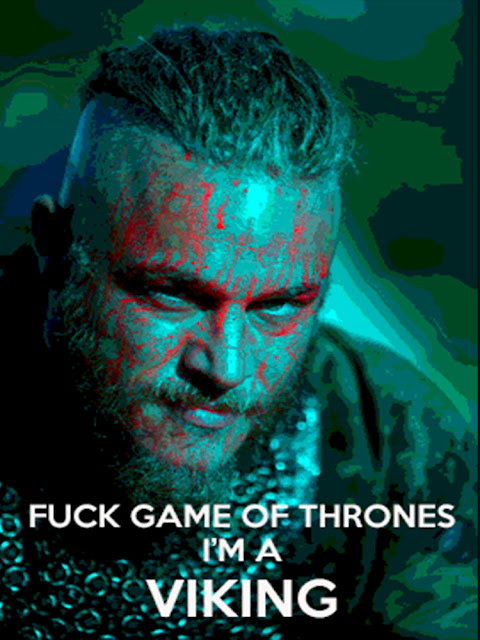 We all know Ragnar could easily sit on the Iron Throne if he switched series. 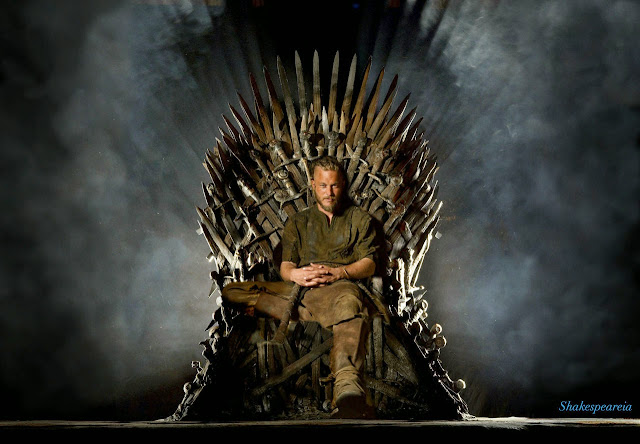 Ragnar is the very epitome of the Viking Creed -- 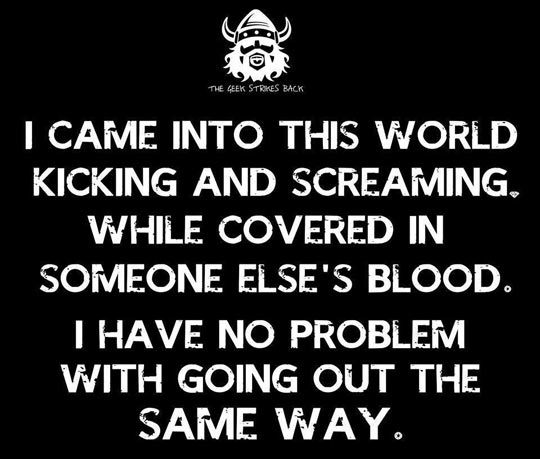 Viking warriors had no fear of death because they believed in Fate and Valhalla. 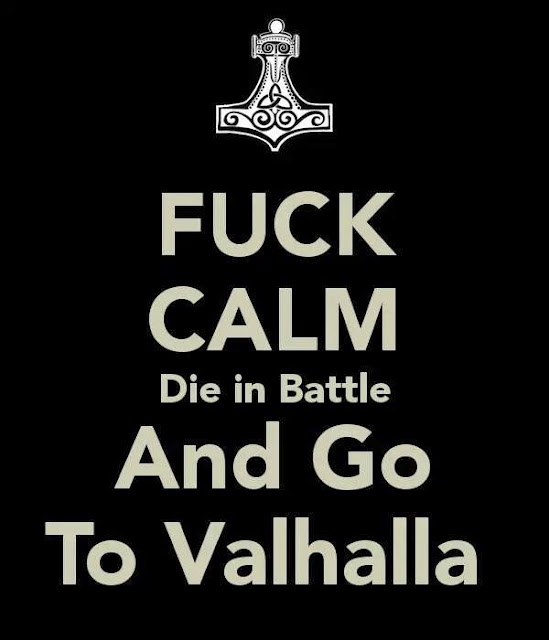 They traveled far and wide, striking fear in much of the known world of their day. Oh, if only Vikings had had t-shirts! 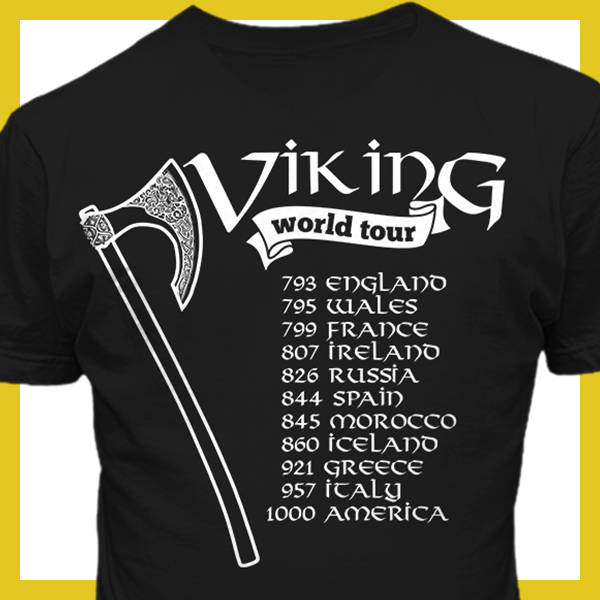 And of course, who is everyone's favourite Shield Maiden? 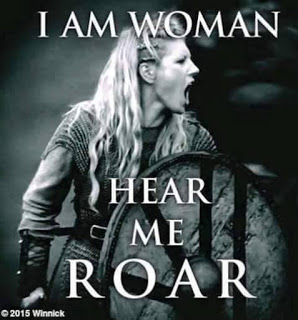 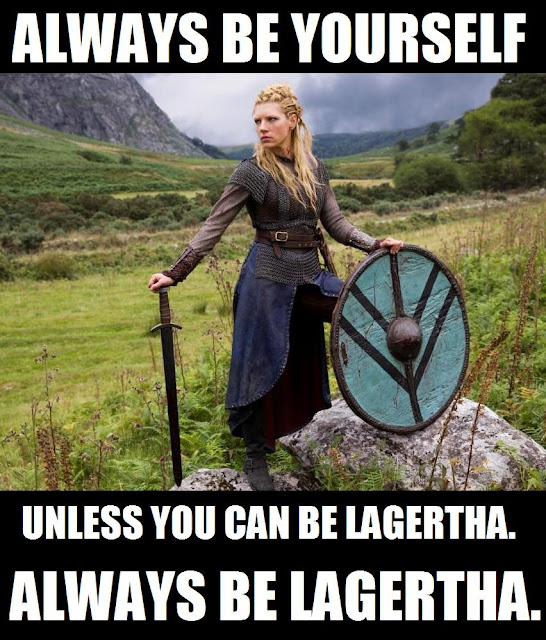 Alas, not many opportunities these days to fill that particular job description. 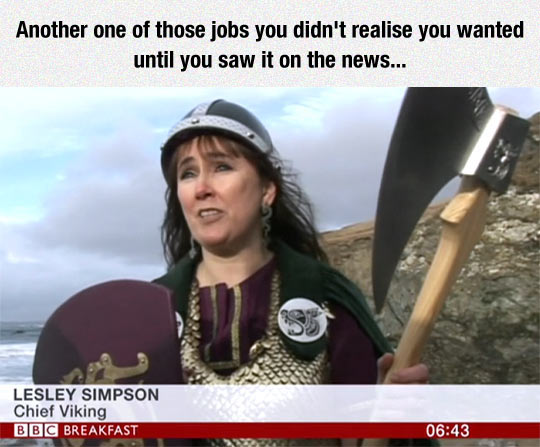 Oh well, we can always just kick back instead, toast some marshmallows in our Viking ship fire pit and dream of what might have been . . . . 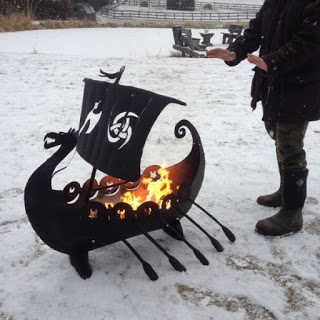 That Viking ship fire pit is a good idea :-)

It would be a great life if it didn't involve all that snow and running, and other stuff I hate. ;-)

The Vikings rank up there with the samurai of feudal Japan as one of my favourite people/periods of history. But I do know more about the Viking myths and legends than Japanese ones. Go figure.

Why would a Chief Viking give an interview for BBC Breakfast? Shouldn't they organize a special smorgasbord for her? Da royal style?

I haven't followed this series but have heard great things about it. I imagine there's a Viking marathon in my future.

I've yet to watch this yummy show. Like I've said before, I'm usually a year or three behind whatever is happening on TV *sigh*. But this bloodied baby is on my list! ♥

Oooooh!! I love them all... I love lagertha the most. Whenever I see her I end up punching and kicking my living room pillows... I know, how very adult of me!

Absolutely can't wait AND I saw that there will be 20 episodes this year instead of 10!! Got my shield already propped against the couch for tonight!!

So many shield maidens, so little time...

Oh the excitement is roarin........in another house, my son and family. You see, I was there, so it's old news! hahahahahah
This season filmed in northern Ontario! Told ya, I was there......
xo

I'll have to mention it to my man. He loves this show. For some reason I couldn't get into this one!

OMG, it's tonight? I forgot to out it on the calendar ... thanks for the reminder! So excited. It's really the only show I watch any more.

Let's all got to Gimli! :) I tried watching this show, and I really, really wanted to like it - but by the Gods it was so brutal my tender Pagan heart couldn't take it. But each time I see a commercial for it I think to myself, maybe? It appeals to me so much, but so violent. Eeeeee.

My favorite Viking related thing is Led Zeppelin's hit "Immigrant Song".
(a few good screams) We come from the land of ice and snow, from the midnight sun, where the hot springs glow....

I would wear that t-shirt.

I'm stealing all of them except for the ones you stole from me..hahah.
finding out that our family is descendants of vikings made up for finding out we weren't Irish..
I think Ragnar will forgive Floki..how could we do without Floki...

I swear to Odin I tried to get into this show but it was just over the blood and guts limit on my TV watching rating list. But onward and upward to those that do like it.

thank's for the reminder :)

Ah,sexy Ragnar is coming back! :D I love Vikings...

That Viking ship fire pit is seriously cool! My husband loves this show. I confess, I lost interest after season two, but I still watch it with him. Couldn't say WHY I lost interest, but whatever. Vikings are cool haha

Loves me some Lagertha. Tell me you have seen 13 Warriors.

And remember, Toronto Blue Jays Josh Donaldson is on it! So excited!

HAHAHA! I love the Viking ship fire pit. That is pretty damn awesome.

Ragnar would certainly fit in with either the Wildlings or the Northmen in Westeroes.

Well, as you know, my young friend, I am olden and must say that I have no idea what you are talking about here...the Viking, I've never seen..(but the one in the first photo...I can see thru that makeup and tell he's a hunk)...I'll see if we even get The Viking here on tv...and if we do, I'll watch a bit of it and then I can join in on your conversations...:) :) :)
xo
and, thanks for coming by to smell my tulips...:)

oops...meant to ask your opinion on the Pope's bold statement regarding Mr. Trump...

I have to say that Lagertha is my favorite character. I too find it a bit gruesome... thank goodness for the DVR, I can fast forward through the bloodiest scenes... I do find the whole show, costumes etc. and the historical aspect (even though fictionalized) enthralling!

Love the Viking ship fire pit...I haven't seen either series..I love period shows but have been told that Game of Thrones is too gory for me..I may just try it anyway..Have a wonderful weekend..

I need to watch that show. Although Vikings means pirates/seafarers, it did not mean a certain nation or ethnicity.

I've heard such good things about that show.

Him sitting in the GOT throne is the best! My hubby loves this show. Me, not so much. :)

Love it! One of my favorite shows! Love Lagertha too. So badass! And poor Rollo just doesn't get that he'll never outdo his brother. Not gonna happen.

One of my wife's favourite shows (I think she has a crush). Understandably.

I still haven't seen a single episode of this show and frankly I have no idea why. I need to rectify that, because graphic violence.

The movie The Thirteenth Warrior was a good viking flick, but if you read the book Eaters of the Dead (Michael Crichton) it is much more in-depth and gives a real insight into viking life and death. You can't cram a book into an hour and a half movie and cover it completely.
If you haven't read it try it.
Floki was right, Ragnar can not enter Valhalla as a Christian.
the Ol'Buzzard

Love this show! I always look forward to seeing it. It has taken some twists and turns for sure. have a great weekend.

At comic con 2014 I got to do a photo shoot for the Vikings. All that is left now is the photo as I guess the channel has taken the clip down. It was a fun experience. Photo is here: https://fearsomebeard.wordpress.com/2014/07/27/promo-clip-for-the-upcoming-season-of-the-vikings-starring-fearsome/

The Vikings is one of my favourite shows. I don't normally like blood and guts shows but this one really intrigues me.

Love the covered in blood, one.