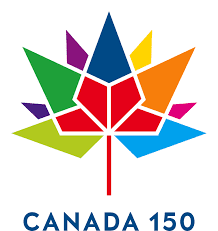 Man, that's a mouthful, isn't it? Today we mark the 150th anniversary of Confederation, the 1867 creation of the modern Canadian state. And in true Canadian fashion, not everyone is thrilled about it.

Many people in Quebec couldn't care less. July 1st is just "moving day" there, when everyone's lease expires and they get a chance to switch apartments.

And Canada's Indigenous people aren't in a particularly celebratory mood either, given that they were here for millennia beforehand, have been treated badly ever since European contact and particularly so since Confederation.

But still, some of us want to party. And some of us *cough, cough* are old enough to remember Canada's 100th anniversary in 1967. We had a remarkably similar maple leaf logo for that party too.

Anyway, I was ten years old in 1967 and Centennial Year was a really big deal at our school. We had to sing Bobby Gimby's "Ca-na-da" song constantly. We had to colour endless copies of the Centennial logo. And they forced us to memorize all the provincial/territorial flags and official flowers! You name me one Canadian kid these days that knows that info -- go on, just one! Can't do it, can you.

And, like every school, we had a Centennial Pageant celebrating our multicultural heritage. Of course, in those days, that basically just meant French, English, Irish, Scottish, Chinese and Ukrainian, at least on the prairies where we lived. I don't remember Indigenous heritage even being mentioned in that school pageant. Wow, eh? Those were insensitive days.

I played the role of CANADA in the pageant. That's me with the flag crown, white choir gown and red-lettered "Canada" sash at the back by the map, waiting to come forward to the front of the stage after the Ukrainians were finished dancing. I assume I had to recite some patriotic little speech or something but quite frankly, I don't remember now. Hey, it was 50 years ago, cut me some slack! All I remember are those friggin flags and flowers. 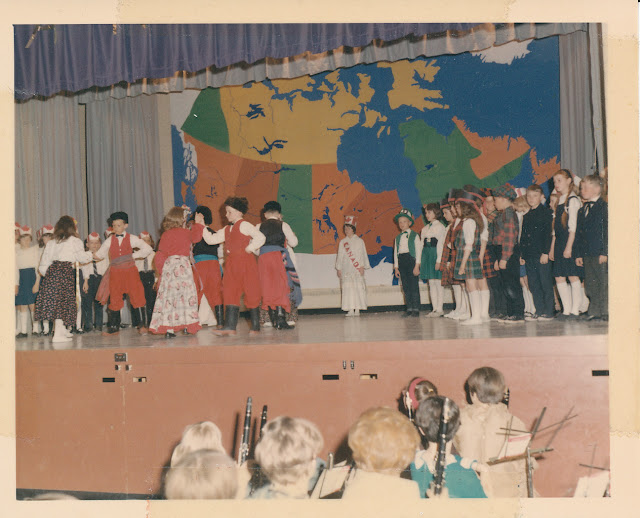 So now, Happy Canada 150 Sesquicentennial, my Canuckian siblings! Today My Rare One and I are going downtown to Churchill Square to take in some festivities and go to the Art Gallery of Alberta, all of which are free today. We're not above saving a few bucks, you know. Later, if we can stay awake until 11:00 pm, we'll watch the fireworks in the river valley from our friends' balcony.

I basically focused on the past in this post, didn't I, rather than on the present or the future. That's because I know damn well that I won't be here for the Canada 200 Bicentennial in 2067 and it kinda makes me sad. These festivities are making me feel my age.

I will keep lots of happy thoughts for you. I want to see you in that crown and sash in 25 years... surrounded by flags and flowers!

happy birthday, neighbour to the north! may you continue to show us the way a country SHOULD be governed!

What a great shot! I have to tell you, those stages in the school gym haven't changed a bit in 50 years! Happy sesquicentennial, and I will keep my fingers crossed for you for the dodransbicentennial!

you think Quebec will ever separate? I wish my Vojvodina would separate from Serbia, but it is just wishful thinking, sadly :( Happy canadyversary!

Born in 1967 I was a centennial baby and I have to be honest, I only lasted 20 seconds of the Canada song.

Much love to you and the Rare One!


Thank you for sharing your glorious school memories where you played Canada .

Happy celebrations my friend and I am watching you in 2042 recelebrating the event! So many best wishes for you darling.
Hope you will be awake until 11 and enjoy the fireworks from balcony

The Canada song is quite cute! Although I can hear how it would get annoying with much frequency. Have fun tonight! Hopefully you can stay awake for the fireworks. The alternative it trying to sleep when they are going off in the distance (typically a problem for me).

Happy Canada Day, Canuckian sister. I'll be expecting you at the Canada 175 in 2042!

Happy 150th. We were in Quebec once on July 1st and wondered why so many people were driving around with refrigerators, stoves and furniture in the back of their pick-ups. Then someone told us it was "moving day" - a concept that is either brilliant or ridiculous, I can't decide which.

Happy Canada Day Debra and Rare One!!! :)))
I'm up north in Quebec and you hit the nail on the head. There are no celebrations, no red and white, no fireworks (thankfully for our Marlene!)...and no acknowledgment.

So be it...I'm celebrating today with Alex and my little fur family! :))

PS to Dezmond: Quebec will NEVER separate. They're too (closetly) smart for that.

Canada's 150th? Boy howdy, now I'm really looking forward to next week's Stop Podcasting Yourself. Graham and Dave are going to be on fire.

That picture of you as Canada is fantastic!

Here in the States, we have 11 years until our something-tennial (I don't know what 250 years is), if we make it that far. I wonder whether American bloggers will be as excited about that as all my Candian blogger friends are about their 150th.

Happy Canada Day, Debra!
Yes, there are always bitter and ironic reasons to NOT celebrate milestones, but I think we should take our chances and raise a glass when the opportunity arises. In fact, I'll toast your sesquicentennial right now!

You know what that song reminded me of? The elves from that dreadful 1960's 'Rudolph the Red Nosed Reindeer'... you know, the classic. 'We are Santa's elves..' Sorry, I haven't tried to attach the youtube clip.

Love the picture of you in the grade school production! Gawd, what memories we have, eh? I must say, though, 10 provinces and you were proud of your memory skills? 10? Psh. Whatevs! 10! Anyone could commit that to memory! Try 50! And, have you caught up on the newer provinces? What's capitol, flag and flower of Nunavut? Hmmm? (Disclaimer: don't ask me for the 50 of my country. Not even.)

Still, I'm waving my Maple Leaf this weekend, my friend, and wishing I could emigrate. Xoxox

Happy Canada 150 Sesquicentennial Debra - it is often only when you look back at old photos that you realise just how much things change.

Happy Canada Day to you but I must confess: I don't celebrate it.

@ e -- Okay, okay, you have a point. Yes, Canada only has 10 provinces and in 1967 we had two territories. So I only had to memorize 12 flags and flowers. But it was STILL hard! And now we have a third territory, Nunavut. But I DO know its flag (yellow and white with an inukshuk on it) although I did admittedly have to look up its official flower on the internet. Apparently, it's Purple Saxifrage. Now we both know, lol!

You were quite the Canada. You and Canada are still young.

I see you were always a model representative of the great white north. I am keeping happy, hopeful thoughts for you and your fine country. Who else will know how to spell dod.....ial??
Happy Canada Day, hope you saw a great fireworks show.

It's the day after now, so Happy belated Canada Day!

Greetings from the (former) motherland.

meet cha at the Dodransbicentennial! Did you get a gold coin in 67? I don't think it was real gold but i wouldn't know because I lost mine. Thank heavens in High school we didn't have to colour flags and we didn't even have Ukrainian dancers in Ontario, but I'm sure we had lots of sweet little girls in crowns representing Canada! :)

Congrats Canada! America is totally jelly of you these days. Sigh.

@ Francie M -- Oh, I'd forgotten all about that gold "commemorative medallion!" Jeez, I wonder if I DO still have mine -- I have a box of miscellaneous, motley coins from my childhood (a.k.a. "my coin collection") that's in a storage box over at My Rare One's -- I need to go through it and see! Thanks for reminding me!

So you were Miss Canada back in '67 eh Debra!!?? Looks pretty convincing to me!
I fell we Canadians have come a long way since '67. Must have something to do with the Trudeaus, wouldn't you say? This 50 year period in our history being 'book-ended' by father and son.

Dodransbicentennial - thanks for the new word.
Very cool that you have the picture of yourself on stage back then. Hope you had a great Canada Day.

Remember that no matter how old you get, your country is always much older than you. I'm sure you can make it to 175. Happy birthday Canada, you strange and beautiful country.

Look at how cute you were as Canada!! I grew up in Ontario and no, I have no clue what the flowers are. What on earth was the point of having to learn that? Also, I like the Ukrainians galoshes. Very chic, and also very adorable.

That would make me sad, too. We need a magic pill, don't we? Is that asking so much?

aww, weren't you a cutie pie...happy birthday to all my canaderians.

You look like such a happy, enthusiastic Canada. Much more convincing than my portrayal of a turkey at the first Thanksgiving at that age.

Happy 150th! I hope you and your Rare One had a great time.

What a wonderful photo! You little cannuck you! Hope you and rare one had a wonderful Canada Day. Hugs from "the birthplace of Confederation" (Take that New Brunswick!)

You made the cutest Canada ever.

I hope you had a great time with the Canada Day festivities. They had Canada Day celebrations at Trafalgar Square in London. Tim Hortons were giving out free coffee!!

Oh, by the way, I went on the Centennial Train that went across Canada way back in 1967.

Wow, this post brought back memories, Debra! I planted a number of those Centennial trees near our school. Although I mercifully had not heard Gimby's "Ca-na-da" song in a while. Now it's stuck in my head ~ Gee thanks! I hope that you do make the 175th. I'd like to as well, but I'll be older that you! It's hard to imagine maybe not making it another twenty-five years. I'm in the denial stage! LOL Every good day is good! I hope that you and your Rare One had fun and caught the fireworks. We were watching them shoot off all along the horizon last night. Take care!

Sheesh Deb - have managed to get through every Celerlybration in my life since 1944 ....

Um, on second thoughts - will really have to add the word "love" to that oblique ancient reference to the charge of the Light Brigade. British Crimea campaign.

What is truly important - is what we do with the journey.

I hope you had a great Canada Day Debra! I'm keeping happy thoughts for you! I love that song! I remember singing it in the 1980's! I hope the children these days know as much as you do or even me. I feel sometimes, something has been lost! I love Canada and I am a proud Canadian! Big Hugs!
P.S. You make an excellent Canada! Great picture!

Hugs from "the birthplace of Confederation" (Take that New Brunswick!)