Ovechkin Finally Gets His Cup!

No, not that cup . . . the STANLEY CUP! The Washington Capitals have defeated the Las Vegas Golden Knights and taken hockey's top prize. 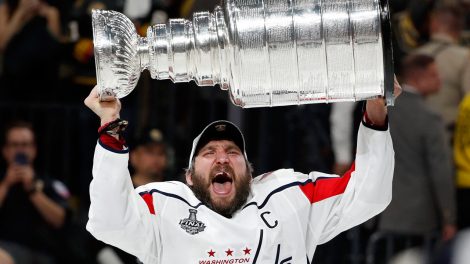 It's the Capitals' first ever Stanley Cup win in 44 years of franchise history, so I'm happy for them. Now the only major hockey prize that still eludes their superstar captain, Alexander Ovechkin, is an Olympic medal.

My favourite part of the series was an earlier game when Ovechkin got hit in the face by a flying puck while he was on the bench. He barely reacted to it, simply reaching up to see if any of his teeth had been loosened by the impact. Now that's one tough hockey player! As Ovechkin has said on previous occasions when shaking off injuries: "Russian machine never breaks."

There is something butt-puckeringly disturbing about that dude shrugging of a puck to the face and checking his teeth. That's not a guy who gently settles into retirement. Why bother with the helmet? Rules? I mean, yeah, give him all the awards, whatever it takes to placate this creature so it doesn't turn on humanity.

84+ days each year, I watch my Capitals play. Ups and downs of this team are all washed away (at least for now) with this championship. I am very happy for this team and the city that it represents. We have so much negative attention directed our way ... it's been wonderful to see smiling faces and everyone cheering for the same objective. Makes me think that we should settle political differences on ice with skates.

Tough guy! Lots of broken hearts here though. Everyone hoped Turk would bring the cup to Summerside.

Such heartwarming moments to cherish and to hold when someone gets hit in the face by a puck!

That's awesome. Congrats to the Capitals. Not a basketball fan, but from what I see on the news every morning we have something similar about to happen here.

I shall stop complaining about my jaw. Damn!

good for the caps! omg...i hadn't seen that clip of ovechkin! too funny!

Does that guy who took that puck to the face work at the Daily Planet in the off-season?

Hahaahahahaa! I saw that video of him getting hit and laughed because it was like he got slapped. So funny.

The whole Vegas pre-show drove me crazy!! Leave it to Vegas to suck the life out of Hockey. Happy for the Cap's it was a fun matchup for the most part.

thanks for sharing. Tough guy.

I am glad they won!!

I agree with Bob Johns....the Vegas pre-game fanfare was almost disrespectful to hockey. As a die hard fan I was disgusted! Vegas may be great at producing
entertainment but hockey, to me, is not entertainment, it's a sport! Has been for over 100 years. But then, I am Canadian!

I am so oblivious to what's goin on in da North American sports world, friend D ... it not even funny to the point of bein funny cuz of my ignorance/ stupidity ... but I love soccer and antedating the world cup ... U? ... Love, cat.

@ Cat -- Alas, I'm not a big soccer fan. The only two sports I really follow are NHL hockey and CFL football. Plus the Olympics when they're on. Fifty years ago in Manitoba, one of our teachers tried to teach us kids how to play soccer. This was long before it became a staple sport in schools like it is today. We never saw much point to it. All that running up and down the field . . . hell, you could do that in field hockey or lacrosse! Why did we need soccer? LOL

@ Bob Johns and LEfting -- I agree with you both. We thought the Las Vegas pre-shows were all hopelessly cheesy and goofy. They were embarrassing to watch. Just sing the national anthem and get on with the game, fer gawdsakes!

Canada got beat again? C'mon guys! This is your sport.

I thought of you when I saw the news ...

Hopefully , he already had "that" cup!! Glad they won..

Didn’t even know the playoffs were on. I’m a terrible Canadian.

I'm happy because Washington is the city of George Pelecanos, although from his writing I understand that ice hockey is not the Washingtonian's favorite sport. Hopefully this will make things change.

I was so happy they won! I never saw the puck in the face! Ouch! And, he checks his teeth! LOL! I thought when the Vegas team had their "show" before the game, it was stupid!!! LOL!