Wearing Her Crown of Light

Today is the sacred day of one of my favourite "Undercover Goddesses" -- Sankta Lucia! 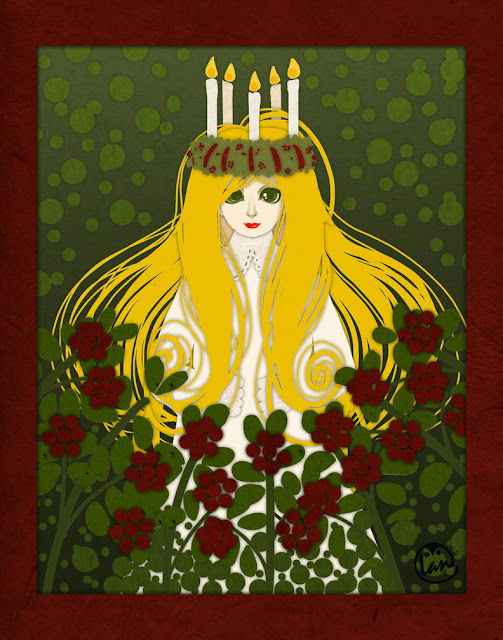 Back in the days when Europe was pagan, She was the Scandinavian Goddess of the Winter Solstice. Following the longest night of the year, She would bring back the light of the sun, not only to illuminate the darkness, but to ensure human survival.

When Northern Europe was Christianized, the Goddess went undercover (as so many did) and was transformed into a Saint of the Christian church. Her "conversion" to Christianity was entirely superficial, however. Her Feast Day remained on the Winter Solstice and Her rituals continued unchanged. Even Her new "saint name" -- Sankta Lucia -- means "Holy Light." 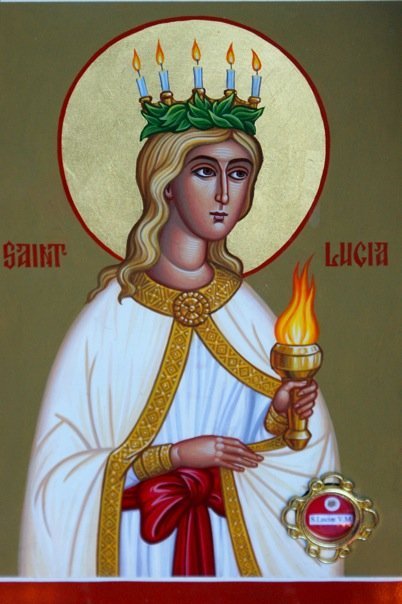 Later, when Renaissance Europe switched from the Julian to the Gregorian calendar, several days were lost in the process. Lucia's Feast Day under the new calendar ended up as December 13, a week before the Winter Solstice. It has remained there ever since. 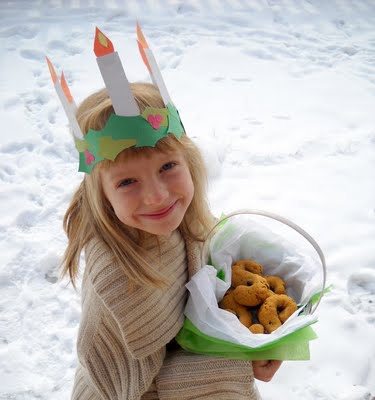 At dawn on Sankta Lucia's Day, a Scandinavian daughter wearing the Crown of Light will go throughout the house to greet her family and serve them the bounty of the Goddess -- coffee and special yellow saffron buns which represent the returning light.


So ends the longest night
With light that She's bringing.
She is the Queen of Light
Joyfully singing!
Clad in Her garment white,
Wearing Her crown of light --
Sankta Lucia! Sankta Lucia! 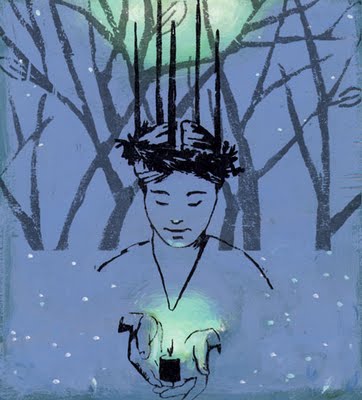 Wishing you all joy and light today!

I CAN'T WAIT til I see more daylight! and those saffron buns look dee-lish!

I liked reading this! I'm typing this at 7:12 a.m. and it is still dark out. I would be totally o.k. with welcoming back some light! -Jenn

Love reading the old tales as the light slowly begins to rise. Fascinating.

Orthodox religion still follows Julian calendar and they're Europe too, Debs :) actually they're half of Europe.
Happy Sankta Lucia!

I love that first graphic....so pretty.

Wishing you joy and light too, Debra.

i so hate the return of the light! i am either part vampire or part bat because i LOVE living in the dark.

It is amazing how on religion gets layered atop another.

I remember a song we had to sing in elementary school music class about St. Lucia: "Lucia comes today..Lucia comes in bright array" and so forth, with her story on the facing page. The class did not have a lot of religious songs; I guess this was a stab at multiculturalism.
--Jim

Right back at Ha! (Oh those Cristians.)

p.s. Now that you jogged my memory, I checked on Youtube to see if I could find the Lucia song. Bizarrely, most of the Scandinavian performances were translations of the famous Neapolitan song Santa Lucia (think Enrico Caruso), which, as a traditional Mediterranean barcarolle, could not sound less Pagan-Early-Europe.
--Jim

I'm all for celebrating the return of light - a week early!

I'm counting down the days until the light returns. I was driving home yesterday and the sun was dropping behind the trees, the dashboard clock was reading 3:39 pm, I groaned out loud, "oh give me a break"! Longer days can't come soon enough.
Thanks for the history/culture lesson as I was not aware of most of this.

Thank you; it's interesting to learn the ins and outs of the christian "take over". I only ever knew that after the solstice, I got an extra minute or two of daylight every year. I'm not too sure about celebrating it a week before; it's difficult enough anticipating it.

Always wondered why Santa Lucia's day is Dec 13th, and now I know. Thanks.

I believe all cultures celebrate the return of the light in one way or another, especially those further north. Day length is measurable and so important! I'm not as far north as you, Debra, but here the clouds and rain darken the skies as well. The Solstice is one of the most meaningful days of my calendar. I'll be celebrating Sankta Lucia on her proper day, not the superimposed Christian day. Bring back the Light!

This is so beautiful Deb! Thank you for the history lesson! Wishing you joy and light today!
I have to admit, I do like the dark. There is something peaceful to me about it.
Big Hugs!

You have to understand that we have no feast days of our own. We have to steal them from others and customize them to our doctrine. And we do it oh, so well...:0)

History has been long participant in the war on Christmas

It's so sad that religion took the most beautiful winter holidays and moved them for their own benefit. It really sucks but it's true.

Oh I totally forgot about Saint Lucy! Shame on me. I have spent the last weeks reading Norse mythology. More funny anecdote: we had a Swedish student who came to visit my family for a year, I call her my Swedish sister. Well, she taught us a lot about Saint Lucy and gave us a few round candle holders that are apparently used for her Feast. But she also baked the saffron buns you mention! We used to eat lots of these and were parts of our snacks between two games of Dungeons & Dragons. Gosh the memories!

I wish I had seen that post earlier. I blogged about something else, but Saint Lucy would have been a nice topic. Oh and I might have a future post this weekend (hopefully) that you will find interesting.

I've always thought Santa Lucia was such a lovely idea. All those gorgeous northern girls with candles in their hair. I am an equal opportunity Holiday lover.

It's so interesting how a religion can come in to evangelize and part of recruitment is merging cultural icons and holidays into the religion to make it more relevant!

Whatever, Santa Lucia is one of my favorites! Thanks for sharing.

Wow that a wonderful post. Thank you for sharing it.

Interesting. So does that mean there's no actual human being, as is the case with most other saints, whether you believe them to be supernatural or not? Just wondering.

Anyway, a goddess is much more exotic than a saint.

Interesting history. My husband was just talking about this yesterday how Christianity has changed things. The religion has taken so many pagan holidays/traditions and adopted them for themselves. Of course Christmas is the most notable.

@ Kirk -- Yes, all spirituality is mythology that feeds a deep human need, in my opinion. That doesn't mean it's not true, just not true in a literal sense.

My wife and I celebrate five days of solstice. We buy five presents for each other and open the first on solstice eve, and one each day after. Winter solstice is our favorite time of year.
the Ol'Buzzard

I always love reading these posts, especially where Goddesses are involved! The history, the stories...all so fascinating!

I love my pagan heathen barely wrapped in Christianity winter celebrations, drink your coffee, eat your saffron bun and put a piece of glitter in your hair (genderless option); grit your teeth, solstice is coming!

Wish we had kids passing out homemade buns!☺ Love and light to you!

I just dug this out of my spam file! And there's a lot of history in this post.. We are having a string of gloomy days so yes, it would be nice to have a little more light...Joy is good too...;)

Gorgeous, so happy to be reading your informative posts again (I always learn something here) xox

I am in favor of deities that bring hot cups of caffeinated goodness and breakfast treats! And isn't Scandinavia where they have that awesome tradition of getting books on the 24th and reading all night long? Damn, it really is better there.

When St. Olaf brought Christianity to Scandinavia the choices were, be a Christian or die. It was his way of expressing Christian love.

Love the first illustration of the Scandinavian Goddess Sankta Lucia, and the fact that she brings us light.
I always look forward to the passing of the Winter Solstice and the anticipation of more light during the day slowly returning.

That was a good post, Debra. It's interesting where things really come from and how they change over time.

T poo thank you so much for sharing this incredibly inspiring story!

Light is always needed to pierce the cover of ignorance