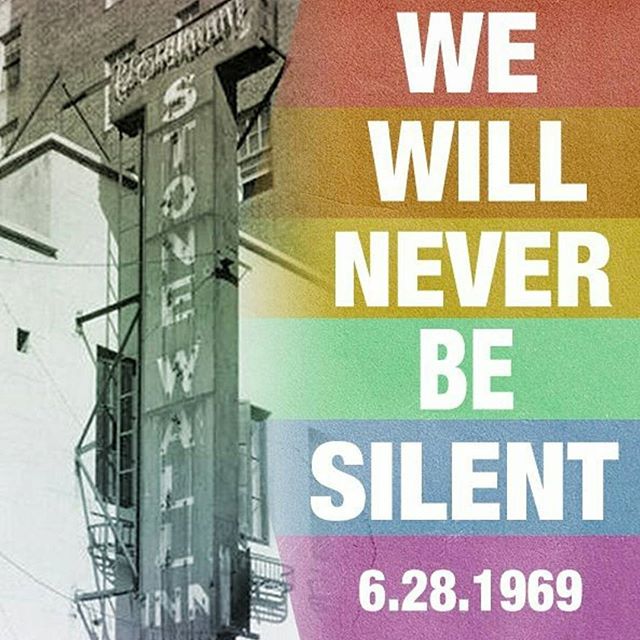 This Friday, June 28th, marks the 50th anniversary of the 1969 Stonewall Riot in New York. This unprecedented battle outside a gay bar between queer people and the police triggered the modern LGBTQ+ rights movement in the USA and, ultimately, the world. It led us to where we are today! 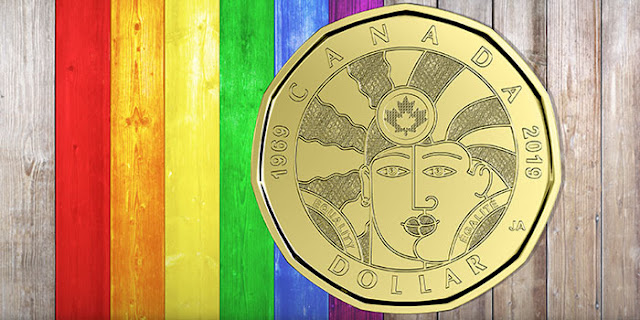 Here in Canada, this year also marks the 50th anniversary of the 1969 decriminalization of homosexuality. This was the necessary first victory in our long fight for equality in our own country. Although plenty of persecution remained to be overcome, this milestone is worthy of commemoration because "the journey of a thousand miles begins with a single step." The Royal Canadian Mint has issued a $1 coin celebrating LGBTQ+ equality which features artwork by the gay Vancouver artist, Joe Average. 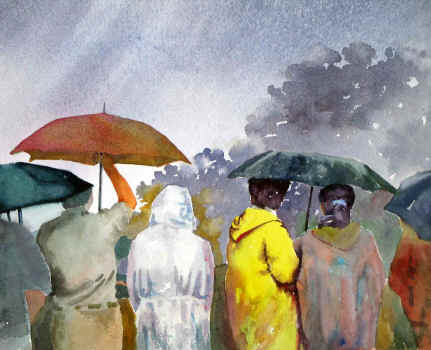 And lastly, June 2019 marks a personal Pride milestone as well. Thirty years ago in 1989 in Winnipeg, I walked in my very first Pride March. There were only about 300 of us who walked on that day -- such a contrast to the huge Pride Parades and Festivals of today! It pissed rain the entire way from Vimy Ridge Park down Broadway Avenue to the Manitoba Legislature (the original parade route in the early years of the Winnipeg march). People yelled abuse at us from their balconies as we went by and drivers waiting in their cars flipped us the bird.

Since then, I've walked in a lot of bigger and better Pride Marches, but there's always something special about your very first time, isn't there!

it must have been scary having to deal with the abuse. but glad you are OUT and PROUD and HERE!

The coin is beautiful... and a marvel (It reminds me of the logo we had designed for our glbtq family hotel in Palm Springs in 2000. I’ll have to share that soon,) So much to commemorate. So much more to hope for.

Yes the time for silence is over, beautiful post. Beautiful art as well😊

My hometown had it's first Pride festival EVER this year. I went with my friend who was with the Free Mom Hugs group. I ordered my pin for next year so I can give hugs alongside her. We were blessed with gorgeous weather and it was such a fun time. I picked up an HRC magnet with the logo modified to say Equalitea. :D If they offer it as a t-shirt, I'll wear that to next year's Pride too.

I think the anniversary of Stonewall should be a national holiday. It sparked the Gay Rights movement, after all, no? I know there were the Daughters of Bilitis and the Mattachine Society and all that, but really, Stonewall galvanized the homos and started a movement. I can totally believe it’s been only 50 years since decriminalizing homosexuality. Same in America.
I think my first Pride already had the floats and the dancing queens but yes, the sense of freedom was fantastic.
Oh, and now I want that $1coin!

I remember that riot well. I lived in the Village at that time.

Fantastic commemorative coin! Many societies have come a long way. What a difference from parades decades ago. Now most people want to get out and celebrate gay pride no matter what their preference. I have not been to one myself but they look like a blast!

Happy pride, and if we've learned ONE thing it's to speak up. SPEAK UP.

we have one of the biggest pride celebrations in the country. why can't people just allow others to be people. i hate when people judge.

I can still remember my first pride....and just about the thirty or forty since. I can just about remember every city's pride I've hit and there all so fun and different.

We and our allies all need to attend and get out there.

Canada was waaaaaay ahead of the USA. While plenty of states had already done so, it wasn't until 2003 that homosexuality was decriminalized on a national scale when the Supreme Court ruled sodomy laws unconstitutional.

Props to you for marching in 1989. The young'uns are benefiting from those who paved the way.

I'm proud of you Debra, that is a great personal milestone!

Happy Pride, darlin. It's just so sad that something like a riot is what is needed to change things around for the better.

That first step/march is the biggest and best. I love the watercolor.

They still yell abuse and beat gay people here and the gay parade has to have more strict security measures than when some president is coming to visit :(

I think it's sad that it was only until the early 2000's until all the USA decriminalized it. And only by a court ruling, not by a state house vote or Congress.

I do like the idea of freedom … of speech that is, friend D. … which translates into conversation and discussion … which can evolve either way … depending what words we use and how we carry ourselves in public … For me it's super simple to distinguish between right and wrong as it all boils down to respect. Much love, cat.

Good for you, Debra! I imagine it was intimidating to march through that abuse, but sometimes we need to stand up for what is right. I wish people could just love whoever they wanted, freely and openly, wherever they are on this planet.

Even though attitudes seem to have changed only recently, the fight has been going on for a long time.
the Ol'Buzzard

First of all: I love that looney! Gonna have to cross the border to get one.
Second: Mad props on your first Pride parade. There have been scary times at Pride, wherever you are, and that kind of abuse was typical in the early days (speaking as a North American).
Third: My first Pride parade was inadvertent. My dad and I were in San Francisco to pick up some paperwork at City Hall. It was the early 1970's. As we made our way through the throng, my dad leaned down and said to me 'That guy just pinched my butt!' He was smiling. xoxoxo

Hello Debra, It seems that by now that total freedom should be a fait accompli, but we are still advancing rights by bits and pieces, with frequent setbacks. As your photos and your readers all say, we must be insistently vocal until LBG&c. rights, as well as allied rights, such as for women and reproduction, are all taken for granted.
--Jim

Thanks for a beautiful inspiring post.
Be well, Debra.

I'd love to march in a pride parade..but Waco doesn't have them(fecking Baptists) and driving to Dallas for one is pretty much out of the question..

Great post Debra. I am impressed by your courage in those younger years.

Sure glad those involved in human right is speaking up.
Coffee is on

I can't imagine how grumpy the social conservatives must be at having to use gay money. Is there anything on the coin that actually mentions anything lesbigay?

first drop or firs step is most important dear Debra and there is no looking back once it is taken :)
congratulations for all the victories until now and ahead

@ Old Lurker -- No, there doesn't seem to be any explicit LGBTQ+ language, you're right. Just the art of two similar looking humans kissing (from one angle). Pretty low key and ambiguous, yeah.

Thanks to all the brave people who weren't silent.

Yup!! There's always something special about your first time.....Hmmmm

I was in Canada (Vancouver Island) a few weeks ago and wish I'd gotten one of those coins as change.

Watching English mysteries that were staged in the pre-1960s showed how gays were arrested and imprisoned.

Times, they are a-changin'.

I admire your courage and strength.

My son and I were so disappointed last year when we went to St. Peterburg and found out we were a couple of days too late for the Pride Parade. St. Pete's is such a fun, artistic town that seems to have a sense of community. I didn't know what Stonewall was for the longest time. Finally, I saw a documentary about it on public TV. When students at colleges write Stonewall in chalk on sidewalks, I always wonder if they understand what it means.

I remember when that happened and was so naive (and young) that I didn't really understand it. People have always been just people to me...sad that there is stigma attached to so many people in different walks of life. I am proud of you for being just who you are!!! xo Diana

I can only imagine how special your first Pride in '89 must have been. Happy Anniversary! Woot!

Thank you for this post, Debra! It doesn't seem right to say "Happy Stonewall Riot Day," but it is absolutely right to honor the event that precipitated the gay liberation movement. I feel so ignorant. I couldn't recall ever hearing about the Stonewall Riot until I heard news clips about it earlier this week. You may very well have posted about it before, but obviously it didn't stick in my brain until now. The Canadian dollar coin is one I will look for when I go to Nova Scotia in a few weeks. The watercolor is a provocative moody painting that I absolutely love! Thank you for continuing to educate me about the LBGTQ+ community. I am as straight as straight can be, but I have come to realize that gender is not bipolar. but a broad continuum which enriches humanity. You have shared so much that contributed to that realization, and I am grateful for that.

I probably told you that one before, but once I said to one of my gay friends that I thought all gays should be sent back to their country. He asked me what country it was. Also, as he was French, I told him that Quebeckers often cannot make the difference between a Frenchman and a gay man and that for many of us, all Frenchmen are gay. He said: "If only that was true".

I have to say, I am so sorry, for everything you have went through!!