The Vikings Are Here 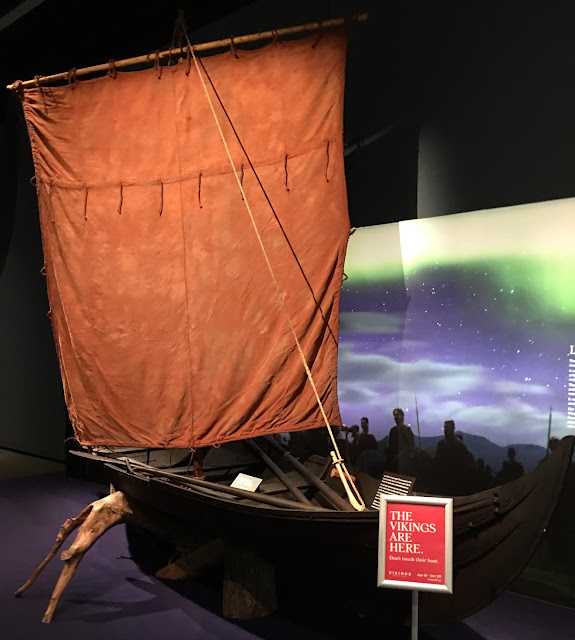 The Royal Alberta Museum here in Edmonton currently has a wonderful exhibition called Vikings: Beyond the Legend. It's the largest touring show of Viking artifacts in the world and is on loan from various Danish museums. The exhibition is a mixture of original historical items like weapons, coins, jewelry, etc. and some replicas like this full-size, six-metre funeral ship shown above, built with Viking Age techniques and materials.

The originals are all safely out of reach in display cases, of course, but the freely accessible replicas are also protected, LOL -- 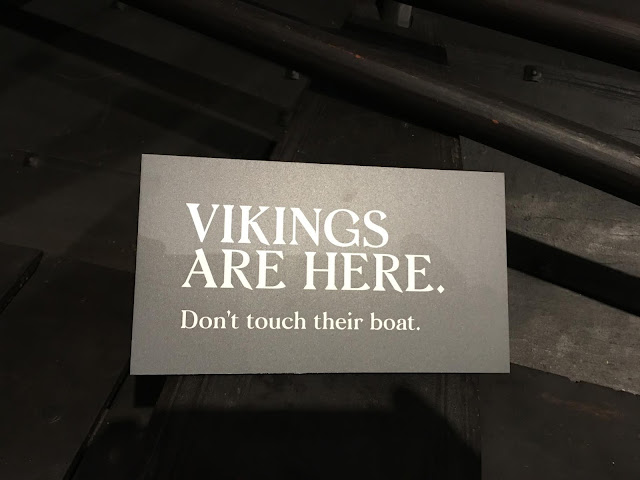 A couple of weeks ago, My Rare One and I made a point of going to a special "Vikings Day" at the museum because, in addition to the exhibition, an Alberta group of Viking re-enactors were there, displaying how Vikings lived, played and fought. Displays included weaponry, runes, jewelry making, gaming, carpentry, agriculture, herbal lore, etc.

One of my favourite displays concerned how the Vikings engaged in bee-keeping as part of their agriculture. After all, they did love their mead! 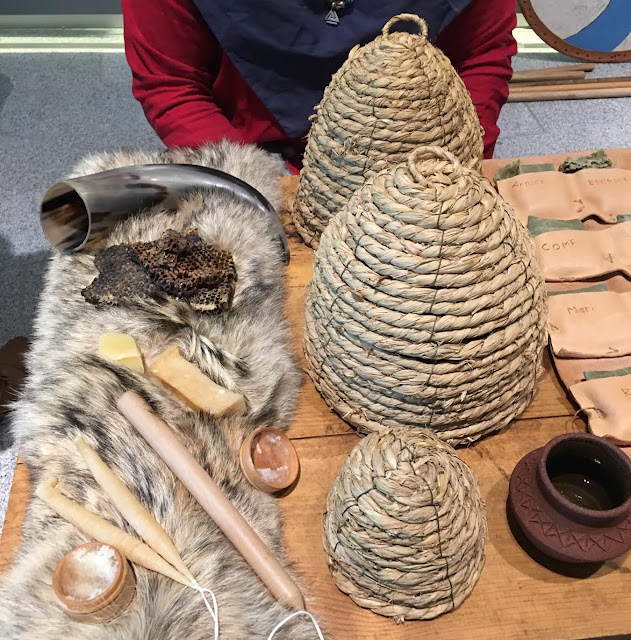 But my most favourite display was about Viking musical instruments. These included stringed instruments made of wood with gut strings, which were plucked like lyres or played with horsehair bows. Beautifully clear and melodious flutes were made of animal horns and bones. The re-enactor at this display could play them all! 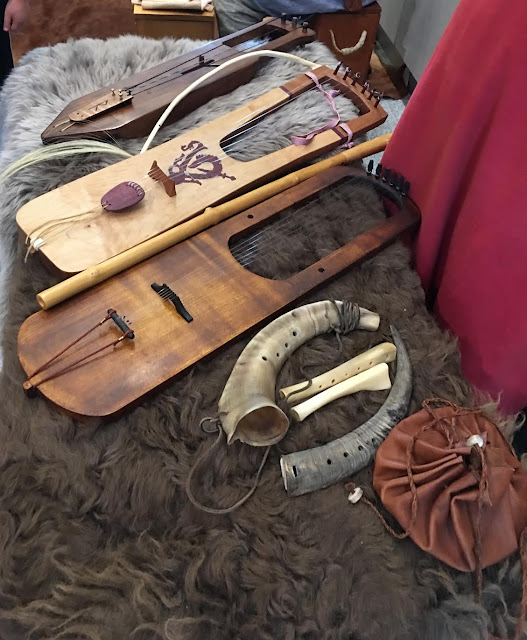 This big and extremely loud wooden Viking horn struck me as being very similar to a Swiss alpenhorn. Those Vikings did get around, you know. 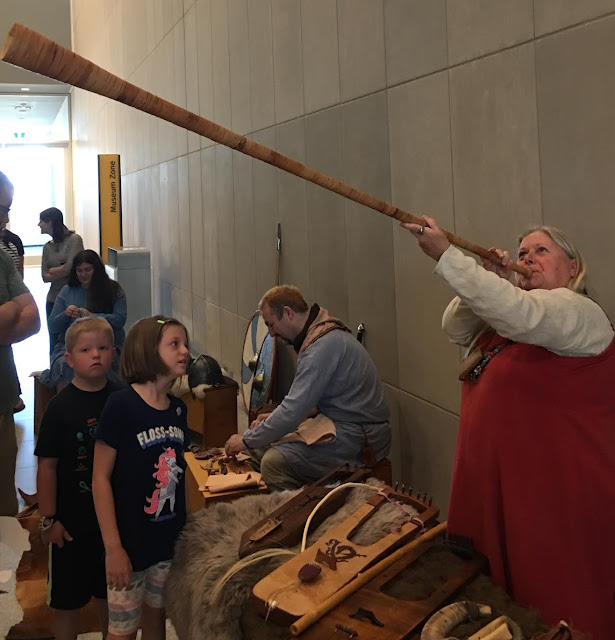 The re-enactors also staged some fights to demonstrate shield wall techniques and the use of common Viking weapons (axes, spears, swords). Then they gave foam rubber swords to all the little kids in the audience, who viciously ambushed and defeated the unarmed Vikings in a mighty battle.

It goes without saying, of course, that the fiercest Viking couple was this threatening, fist-shaking pair in their helmets and warrior garb -- 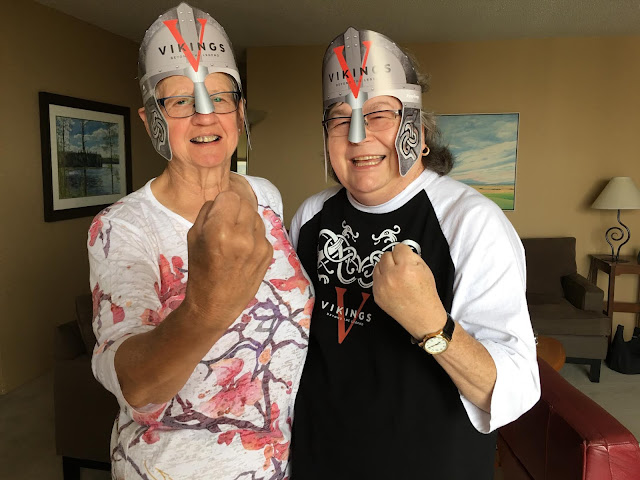 And no, that is not a floral motif on My Rare One's blouse. It is the freshly shed blood of her enemies.

Be afraid. Be very afraid.

[All photos were taken by My Rare One, except for the last one which was taken by our buddies the Valhalla Valkyries.]

This sounds like so much fun! I binge watched The Vikings on Netflix because I find them fascinating. Apparently they came to America before anybody else. And that last photo is fantastic! Love it!

Very cool.....but dear, I have been pillaged enough lately.

you two are totes adorbs!

Oh I am fascinated with the Vikings. I know they are in my ancestry. Would love to visit that museum.

you girls sure know how to get crazy!

My husband would love this exhibit! I would enjoy the lifestyle aspect of it. Those instruments look amazing and I am sure they sounded so too. Love the helmets!

Holy Odin's Fur Vest! You two are fearsome AND awesome!

What a great exhibit.

It's hard to think of vikings as great music lovers, with all their pillaging and conquering going on.

You two are bad-ass!

Hello Debra, The Vikings were definitely not meant to have stuffy, embalmed in a glass case exhibitions, although I would be fascinated by those parts also. We always read about "Viking" artifacts found here and there in the U.S., Canada, and Greenland, but there seems to be little left intact, or with a reliable archaeological record. I hope the exhibit cleared up what is known for certain.
--Jim
p.s. Love the picture of you two!

Yes, the Vikings did settle parts of what is now Canada before either the English or French (but not the American Indians, of course)

Hey Women! ALWAYS put your thumb OVER your fingers when making a fist! Otherwise you could break your thumb. Also, straight wrist when punching, lead with the first two knuckles... just fyi.

Love the musical instruments! What an interesting exhibit.

They mostly pillaged, raped and spread death around Europe of their time, so I don't know why would people admire so much these mediaeval Fascists, so to speak. I gave up on the TV series when in the first episode they showed them raiding a peaceful English village and in next they tried to portray the Viking as some kind of hero as if he did not just rape and pillaged a whole village? But that is today's TV, sadly.
In other news I'm sure you've heard Valkyrie will be getting her lesbifriendly film at Marvel.

You would love L’anse aux Meadows where the Viking had a settlement in Newfoundland.

I wonder how many of those were my ancestors

@ DEZMOND -- Yes, it's true but that's the story of human history in its entirety. It's all based on war, murder, greed, theft and oppression from the beginning of time to every nation currently on the face of the earth.

Yes! Love the last picture but I came to say what e just said: Thumb on the outside of the fist, then knuckles first and all your body weight behind it.
But no, no, no; we’re not violent at all. Not at home!
/ Onevikinggirl
Ps. Where is Jono??

@ Onevikinggirl -- I don't know where Jono is. Perhaps he's just taking the summer off from blogging. I hope he hasn't quit blogging altogether.

Oh you two look awesome!!!! That really made me smile! :)

aaaah, my ancestors..I wish they'd come to the states..if they were any where in Texas I'd go see it..I love this so much..

Hahaha, that last photo is great. Should I be scared?

Onto Valhalla we go! At least someone will go.

This was so fun. The children battle must have be fun.

Blood of your enemies will earn you a place in Valhalla.
the Ol'Buzzard

Rather surprisingly the three Viking bee skeps look virtually the same as the one that I have sitting in my garden.

Great post..I had no idea that the Vikings were in to Bee keeping.."The Vikings" was one of my favorite movies...I think I was in high school...BTW..for some reason, I don't get my blog comments in my email any more ..That made it really easy to respond to a commenter..Now I have to email them and since I don't have your email address, I have to mention your comment in your comments on your blog. .confused?? What a pain..Anyhow..thanks for the Bunny comment

Vikings did not really exist. It was a "profession", so to speak, not an ethnicity or a culture.

Wearing the blood of your enemies is good. It lets others know to stay away and you have peace and quiet around the village. I actually live in Viking territory, it's the mascot of our school system and sports teams so there are signs on lawns everywhere that say HOME OF VIKING PRIDE. Huzzah!

How cool.
Coffee is on

Wow !
thank you for wonderful information about vikings dear Debra ,i really did not know that there can be museum to display pirates :)

what i found most amusing are their musical instruments
they were surly of highly imaginative and sophisticated mind :)

i ABSOLUTELY LOVED YOU TWO HERE :)

and blood on outfit of your rare one is frightening indeed :)))
hugs!

What a brilliant final photo. Remind me to give Your Rare One plenty of space! We went to the Viking museum in Oslo, Norway. Wow! Would love to see this exhibit.

Badasses. You. Are. Excellent!

That is very cool.
In Judaism, the ram's horn is used as a "shofar" to mark the New Year.

Viking women are not to be trifled with. Just keep yor blood lust in check, please.

@ jono -- Hello! Speak of the devil! See the comments above by onevikinggirl and me. Please start posting again -- we miss you!

i bet that was so much fun!
ya'll look like you were having a blast.

Great exhibit. I know one or two folks who might enjoy it very much. Like the bee keeping stuff and of course, the fab picture of the fiercest viking couple on the planet.

You two are so cute! LOL! Made me smile! Thanks for this great post Deb! Some really interesting things to see and learn about! Big Hugs!

How fun!! The Danish Canadian near us puts on Viking Days with the same types of things, the Viking re-enactors, the foam swords for the kids...etc! Fun!!

Fascinating. I don't tend to think about the Vikings as home-makers and bee-keepers. You don't look nearly scary enough but your Rare One is quite intimidating!

Oh what fun!!
I would love to see an exhibit like that.
Love that shirt Rare One has on. :)

I'm a follower of Viking culture, I traced my ancestors back to Vikings. Skål sheildmaidens - it looks like you had a successful raid.

The Board of Directors Here at Spo-Reflections asks for you to send back the horn they lost it in their last raid and they want it back.

This looks like so so much fun! I'm so glad to be back on Blogger and reading your wonderful posts again.