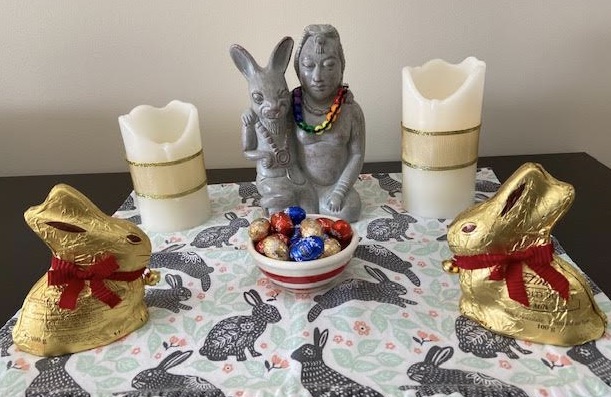 Halfway between the Spring Equinox and Easter, this month's full moon altar honours the Mayan Goddess Ixchel, represented here in her Maiden Aspect as the Goddess of Fertility. She's obviously great pals with her Rabbit buddy and of course, rabbits are powerful symbols of Fertility, Spring and the Divine Feminine in many cultures. Two Lindt chocolate bunnies pay homage to the Goddess and present her with an offering of Lindt chocolate eggs. The altar cloth is a tea towel which my sister gave me.
The Mayan civilization flourished 2500-3000 years ago in Mexico and Central America before both the Aztecs and the Spanish Conquest. I obtained this reproduction statue of Ixchel years ago from Sacred Source, the online website which sells ancient deity imagery.
Ixchel's name means "Lady Rainbow" which is why I keep a rainbow necklace around her neck. (Actually, it's a golf stroke counter that I got at a lesbian Texas Scramble golf tournament back in the days when I still pretended to golf.)
And, just in case you're wondering, yes, those chocolate bunnies will feature in a Special Communion Ritual on Easter weekend to be attended by My Rare One and me, LOL!
[Photo © Debra She Who Seeks, March 2021]
Posted by Debra She Who Seeks at 04:00

It's serious and lighthearted at the same time. We've had too much rain to keep track of the moon phases lately.

an edible alter...now, that is cool!

Hello Debra, I can't blame Ixchel for cozying up to that bunny. If we had rabbits that size, I'd want to be on their good side also!
--Jim

Strange how the moon is central to so many rites: did you know that Easter is observed on the first Sunday after the first full moon after the vernal equinox? And Passover figures in there somehow as well, but I don't have the precise details. Bunnies, as cute as they are, may be plotting to raid my as yet to be planted garden! I much prefer the chocolate variety for that reason.

I didn't know you used to golf! eggs & bunnies - fertility and spring images. the moon has been viewed the past 2 nights in all its fullness.

I think a golf stroke counter would be useful even though I don't and never will play golf. I scrolled back to take another look at Ixchel wearing her golf-stroke counter necklace. She is beautiful.

I love this one!

@ Frank -- Yes, Easter is what's called a "moveable feast" in the Christian calendar because its date is not fixed (like Christmas) but dependant on moon phases. Another reflection of Easter's pagan roots!

@ anne marie in philly -- I never golfed (or wanted to, gawd knows) until I met My Rare One many years ago. Golf was a hobby of hers, so I attempted to take it up to go with her to lesbian & charity golf tournaments etc (Texas Scramble only). I took some golf lessons and gave it my best shot, what the hell. But ever since she retired ten years ago, she doesn't golf anymore so I gave it up too. My favourite thing was always driving the golf cart anyway.

Oh No! Are you and The Rare One sacrificing those sweet bunnies? They look like they are ready to be entombed-like King Tut- all covered in gold foil! Have a great Sunday today- xo Diana

I really love this post. The one thing that caught my eye on your alter is the rabbit fabric. Have a nice day.

An elegant altar. I love the statue of Ixchel and Tochtli. But I have to admit parts of that altar wouldn't survive a day around me. Chocolate!

@ Moving with Mitchell -- I am so impressed that you know the rabbit's name! I didn't! Thanks for edumacating me!

Will the chocolate bunnies be sacrificed in that special ritual?

Easter is based on the Jewish calendar which is based on the moon not the sun hence why the date of jewish holidays move around. Easter falls over passover because that's the last supper right?

@ Lady M -- Oh yes, we will be communing WITH the chocolate bunnies, if you know what I mean. And you're right, of course, about the link of Easter to Passover -- I'd forgotten that the Last Supper is the Passover meal. Thanks for the reminder!

What is the goddess of Chocolate Turtles. That would be my choice.
I would celebrate her all year.
the Ol'Buzzard

This is fantastic in so many ways! Love it! And your new header is so pretty! Have a blessed Easter.

@ Ol'Buzzard -- Well, I don't know about the Goddess of Chocolate Turtles specifically, but you might try celebrating the Mayan Goddess Ixcacao ("Cocoa Woman"). Mayans called the cocoa drink "xocalati" which is where our word "chocolate" comes from.

When you mail me those chocolate bunnies, make sure to pack them carefully. I don't want the ears to break off.

Tochtli is simply the word for rabbit and I have no idea why it stayed in my brain; that's how my brain works. I don't know if your rabbit has another official name.

I love chocolate eggs. And you say those are an offering? In that case, how does one go about becoming a fertility goddess?

Please tell me that the ONLY bunnies you'll be sacrificing will be CHOCOLATE!

Driving a golf cart, eh? Now I know why someone called you "Sporty", LOL!

@ Tundra Bunny -- Rest assured, you and all the other arctic hares are perfectly safe! Unless you hop in front on my golf cart, of course.

Makes me want to eat the Easter rabbits I bought for Easter Sunday. Paience, patience...

This is both wonderful and delicious. :)

A lovely altar to a worthy past.

Never heard of Ixchel.
Coffee is on and stay safe

A beautiful altar, and it must smell good too, with the chocolate! I've never played golf, knowing myself I would surely give some innocent bystander a black eye while swinging the golf club.

I've got two of those bunnies sitting on my coffee table right now, but I'm not sure they'll make it to Easter.

Wow! I just purchased these same two chocolate bunnies!
I do not have a Mayan Goddess however, I have a few Celtic types in need of some recognition though.

Lady Rainbow! I love that! That's a beauty of an altar.

Bunnies and fertility..Who would have thought??

I'm all in favour of fertility goddesses and chocolate bunnies.

MANY THINGS TO LEARN HERE AGAIN :)

loved the goddess and edible bunnies oh my

Yum chocolate bunnies!
Also, Ixchel is the bomb. Really, anything Mayan or Aztec is fascinating.
See why I'd rather follow the Debra Calendar?
So much more fun.

Cute Altar and how you attained your Rainbow Necklace, the back story just made me Smile.

I love your altar Deb! Love the story about the necklace! Special Communion Ritual??? LOL! I know you had fun! LOL!

A fun and yummy altar, Debra!

I love your altars