Glastonbury -- Avalon of the Heart 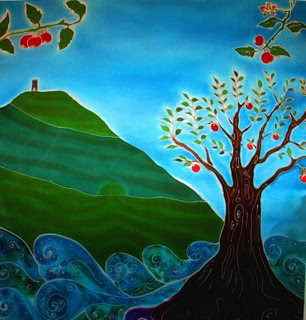 It is to this Avalon of the heart the pilgrims still go. Some in bands, knowing what they seek. Some alone, with the staff of vision in their hands, awaiting what may come to meet them on this holy ground. None go away as they came.

In ancient times Glastonbury was called the "holyest erthe in England." It is a location equally sacred to Pagans and Christians and is also central to the Arthurian legends. It is reputedly the mystical Isle of Avalon where King Arthur, the Once and Future King, awaits his return to the world. Two powerful ley lines -- the Mary and Michael lines -- intersect at Glastonbury, the experts say, confirming its special spiritual status.

Glastonbury is where our tour had its "base camp." From here, we ventured out on day trips to see other sights and visit other places, returning again each evening. But of course, we also thoroughly explored Glastonbury itself -- the Tor with its tower, the Chalice Well spring sacred to the Divine Feminine, the ruined Abbey destroyed by Henry VIII and St. Joseph of Arimathea's miraculous thorn tree on Wearyall Hill. (Stay tuned for individual posts about all these places).

Debra, beautiful artwork. Apples, huh? Did you ever read Mary Stewart's trillogy, Crystal Cave, Hollow Hills and The Last Enchantment? All about the Arthurian legend. Oh, I loved those books and got me started on a lifelong love affair with all things Arthur. :p)

Yes, Barbara, I read those books when I was a teenager and absolutely adored them! As with you, Mary Stewart helped to fuel my love for the Arthurian myths. Tennyson's Idylls of the King sparked my initial infatuation and I never looked back!

The silk art is stunning! I love the colors.
I cant wait to read your future posts!!

Hi Debra! I have not been to Glastonbury yet! It sounds so inenchanting and full of history!

Stumbled upon your site and want to convey to you how much i enjoy your blog.

As a resident of Glastonbury it is always great to meet those who feel the magical essence of the town and landscape.

We just enjoyed a great vernal equinox celebration and plans for Beltane, 'the big one' are under way