Wearyall Hill and the Holy Thorn 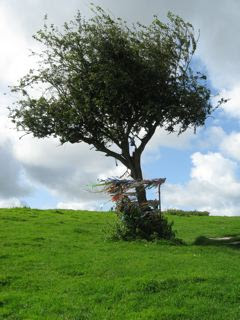 According to myth, St. Joseph of Arimathea escaped the persecution of Christians after the crucifixion by sailing to England with a small band of followers. Arriving at Glastonbury by sea (which had not yet receded), the fatigued travelers landed at a spot soon named Wearyall Hill. St. Joseph disembarked and expressed gratitude for his new home by thrusting his walking staff into the ground. Miraculously, the stick turned into a flowering thorn tree native only to the Middle East.

The Holy Thorn grew for many years on Wearyall Hill until it was cut down in the 1600s by a fanatical puritan (legend says that he was blinded by a flying splinter as he did so). However, slips were saved from the fallen tree and were replanted in various spots around Glastonbury. Today there is still a descendant of the original Holy Thorn high on Wearyall Hill. Like its predecessors, it flowers every Christmas. The Queen receives a sprig of the sacred flowering tree each year as a gift from Glastonbury.

As we found out on the day we walked up Wearyall Hill, it's very windy at the top, just like the Tor which can be seen in the distance. As a result of the ceaseless wind, the Holy Thorn leans off-kilter. The tree is protected by a round metal enclosure -- presumably to prevent anyone else from trying to chop it down? The old pagan tradition of tying ribbons or strips of cloth on trees when making a wish or a prayer is practiced even on this most Christian of trees. Most of the ribbons are tied to the round metal enclosure. Look at them blowing straight out in the constant wind! We tied our ribbons here too and my Rare One took this photo for posterity.

OMG. I never heard this story. Thank you so much for sharing it. I love the ribbon tradition. I love going to cathedrals and churches when I travel just to see their archetecture. But even though I'm not Catholic, I always feel compelled to light a candle for my parents when I'm there. Is that wierd? Something like tying a ribbon, I guess. Thanks so much.

I love Glastonbury, we have just returned from our latest visit for Mabon.
Love the blog BTW:)

What a beautiful story and tradition. I know I will never get there, but reading your tales makes it all seem so real to me. Thank you.

i haven't thought of this story in years!!! thanks for jarring the cobwebs!

i love that story, expecially the part where the puritan lost an eye..ha(bad pagan, jackie, bad pagan)

What a great story - the tree is wonderful! I love all the ribbons!