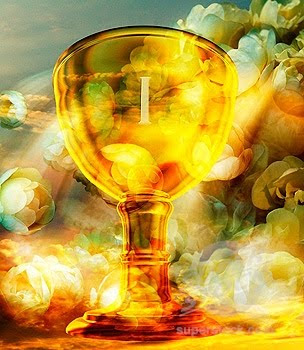 St. Joseph of Arimathea apparently brought something extremely valuable with him to Glastonbury -- the Holy Grail. This was the cup or goblet used at the Last Supper by Jesus and his disciples. It was also used the next day by St. Joseph to catch Christ's blood while he was being crucified. So the Holy Grail is one of the most sacred of Christian relics and possesses great miraculous powers.
Where exactly the Holy Grail ended up after being brought to Glastonbury is a bit of a mystery. Some legends say St. Joseph buried it at the base of the Tor and thereby caused the sacred Chalice Well spring to start flowing. Another myth says it was entrusted to the wounded Fisher King for safekeeping. Other stories imply that it simply disappeared to parts unknown. King Arthur and his knights certainly spent a lot of time and effort trying to find the lost Holy Grail.
All I know is that WE didn't come across it during our trip!
Posted by Debra She Who Seeks at 07:12

OMG, and I just read the comment you left on my monkey post? Hahaha! I'm roflol!! Thanks for that! You made my Sunday! xo

Ah, what a wonderful trip you must have had. How long did you stay? In my dreams I visit Glastonbury. Thank you for sharing about your trip.

We were on a 9-day tour of various sacred celtic/pagan sites. It was fabulous! There's still LOTS more to blog about!

I got you back Debra! I had lost you in action blogging style! Blog gemlins took you off my reading list! Glastonbury you say? I would love to hear more, amazing history!

I can't wait...this has been fun and very interesting..
I thought the holy grail was Mary Magdelein...oh wait..thats the tom hanks movie..ha