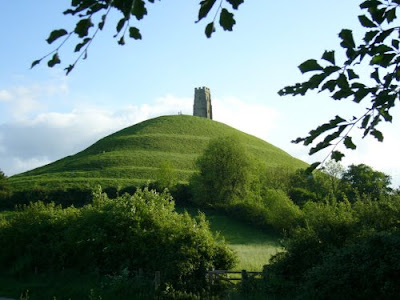 The most prominent physical feature of Glastonbury is the Tor (which means "a high rocky hill.") Green and treeless except at its base, Glastonbury Tor rises majestically above the town and is visible for miles. Thousands of years ago in Neolithic times, terraces were sculpted in its sides, presumably to act as a labyrinthine processional path up to the summit where rituals were held. Today, there also exists a more direct route to the top, straight up the side of the Tor! This modern route has added some helpful features like rough stone steps and the occasional bench to aid weary climbers.

In pagan times, as Mara explained to us, the Tor was sacred to the Divine Masculine, who was often honoured in high places of air and fire. This association continues today. At the very top of the Tor is a single stone tower -- St. Michael's Tower -- all that remains of a medieval monastery. The Tower is dedicated to the Archangel Michael, as is often the case with Christian structures found on high hills or mountains. But on the wall of the Tower is also found a small carved relief of St. Brigid milking her cow, a nod perhaps to the pre-existing (but now Christianized) Goddess of this area.

The Tor in ancient times was surrounded by water and actually was an island until the sea eventually receded. The Tor was called the Isle of Avalon and was believed to be the mystical Otherworld where the dead live forever among lush apple orchards in a land of endless summer. Others characterized the Tor as the Portal to the Faery Realm where many marvels await. In either case, the Tor has always been regarded as a sacred place, a numinous threshold between this world and another.

[Tomorrow -- our climb up the Tor] 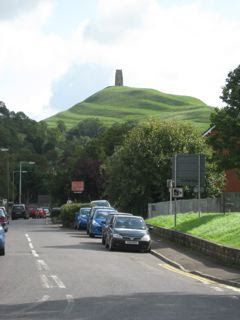 oh man..i am sooo enjoying taking this trip with you..tahnks so much..

now thats amazing, I would imagine you might go back, I think I would, I read the comments on part 2 and I see you have a blogging friend who lives close to this place , wouldn't that be amazing to live near,