As everyone knows, Jesus and the Virgin Mary have a long history of making guest appearances on food. According to Wikipedia, they've manifested on toast, tortillas, pizza, Cheetos, Marmite, pretzels and grilled cheese sandwiches. In Canada, Jesus kind of screwed up by appearing on the wall of a Tim Horton's donut shop rather than directly on a Tim Horton's donut, but we didn't hold it against him. Occasionally other Christian celebrities get in on the action too, like Mother Teresa who appeared on a cinnamon bun.
Well, the Goddess was recently featured in a long overdue cameo on . . . (wait for it) . . . a pancake! Yes, in this actual unretouched photo you can clearly see the Sacred Yoni (Vulva) of the Goddess manifested in golden panfried goodness! O sacred portal of Life, Death and Rebirth! You bless us with your miraculous appearance on this humble breakfast favourite! All that's missing is the sacred syrup. 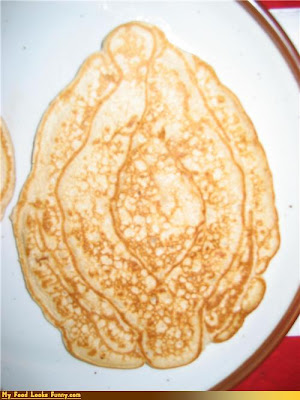 Photo courtesy of My Food Looks Funny.
Posted by Debra She Who Seeks at 05:51

-giggles- And don't forget a bit of sacred butter too!!!

I'm glad the antibiotics worked and she chose to appear on a non-harvest nut pancake.

~l♥ve...its a shame she was going to get eaten though...too funny! warm wishes and brightest blessings~

Oh gosh, that was too funny...a great way to to start my day. Thanks.
Mary

Whahahah I loooove that!! Seriously it would never have lasted in this house! You crack me up girl!!
Your treat is on its way to you as we speak...hugs, Sarah

oh man..you're not going to belive this..had pancakes this morning and lo and beho..there she was on my pan cake..the goddess..but when i took the picture it looked more like roseanne...ha...

There are miracles at every turn...of the pancake and more...

No syrup please....speaking of LBJ (little baby Jesus), have you had the wonderful opportunity to pick up the book "Lamb, The Gospel According To Biff, Christs Childhood Pal.??

Little Messy Missy -- I almost bought a copy once but then figured I didn't have time to read it. Sounds like I should MAKE time, eh?

Aw that's nothing. Yesterday I found a potato that had a bum.

Hilarious! Fabulous! This one needs to go viral! ;-D

Where in the Great White North did an apparition of Jesus on a Timmy's?!

Mother Theresa on a cinnamon bun? -- Where have I *been*?

Because that's the way the Goddess wishes to appear in order to inspire us ... on a pancake. (Smeared with butter would have been interesting.) Did you know that the lady who found the Virgin (or Jesus?) on a grilled cheese sandwich actually had Kat Von D do a tatto of the grilled cheese sandwich on her? Yes, she has a tat of the sandwich. A true believer.

I am crying with laughter. The Goddess does now how to make an appearance, doesn't she?

It's a sign! Someone is finally going to get some!

LMAO, How very Georgia O'Keefe of her.

The reason Jesus showed up on the wall of Timmy's and not on a doughnut, was because we Canadians don't pause to examine our Timbits long enough to see the big guy before we bite. If he hadn't appeared on the wall - no one would have ever noticed him on the doughnut.

Okay, so this is really awful. I was, um, peeing and started laughing like a crazy person because I thought about this post. Yep, 'Weird' should have been my middle name!