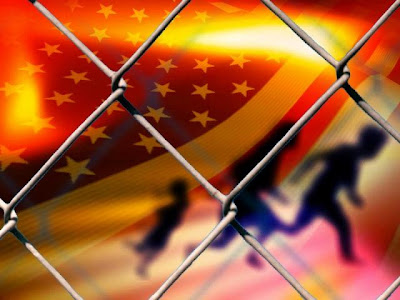 I was wondering how long Lady Zaza's "perfect life" with Lady Gaga was going to last. Not too long it seems, according to this urgent email which I just received from my footloose feline --
Hello, it's me again. DISASTER HAS STRUCK!!!
On the weekend, Lady Gaga's tour hit Phoenix, Arizona. While the roadies were setting up and Lady Gaga was doing her sound check, I took a little stroll around the city to see the sights. You know Arizona's new law that allows the police to check the immigration papers of anyone they regard as suspicious? Well, they determine who is suspicious not only through RACIAL profiling but through SPECIES profiling too! A big cop stopped me and said, "You don't look like an AMERICAN cat to me, furball -- show me your papers!"
It's so unfair! It's not MY fault that I entered the United States illegally with my gypsy band. We were just seeking a bit of southern sun and warmth in the middle of winter! HOW COULD THAT BE WRONG? Everybody in Canada wants to do that! But not even Lady Gaga could persuade the authorities that they were making a horrible mistake. What is this world coming to, when a CELEBRITY is ignored?!?
To make a long story short, the fascists are DEPORTING me back to Canada on the next plane to Edmonton! DEPORTING ME!!!
Please come and pick me up at the airport at your earliest opportunity. Signed . . . your poor persecuted kitty. 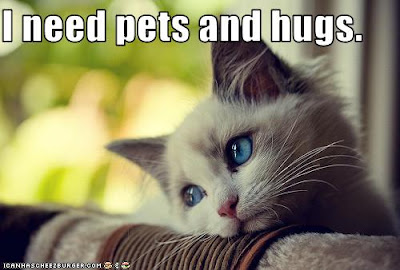 I cannot believe that they ignored Lady GaGa.. what is the world coming to? Looks like you need to get yourself off to the airport!!

~oh lady zaza i am so sorry your adventures with the gyspsy band has come to a disruppting hualt and you are on your way back to edmonton...sure you could sneak your way back out? be well and brightest blessings~

And Edmonton of all places!! What a scandal....

Booo! Leave it to those people to do species-profiling. I am disowning Arizona... and I was born there.

Well, they say everyone has fifteen minutes of fame, right? Ahhh, people are fickle and Lady ZaZa WILL make her triumphant return. Tell her she she has all these fans in the blogosphere who would love to see her!

Poor Zaza (will she go back to Zara now, or something less exotic?) I feel her pain. The rain in BC has gotten to be a bit too much, and I'm dreaming of Arizona too. Perhaps she'll find a group of rowdy Pagans at a Summer festival to rekindle her sense of adventure!

Well she looks red, white & blue to me! I don't see that she is wearing a maple leaf garland! She is such a cutie.

i just spit blueberry juice all over my computer..hahahahahah

I was wondering how Lady ZaZa was doing. Now, you will have to cure her broken heart.
Mary

Awww i cant believe Lady ZaZa's travelling days are over........ well for awhile anyway (once a traveller always a traveller) hope she makes it home safe and sound x x x

Maybe some clip on blue hair extensions would help you look a bit less suspicious and a collar tag that says "Buy USA" and maybe a yellow feather or two if you could keep from chewing on them.

meow...thats bad news for us all.

OOoh too funny!!! Where in the world do you come up with this??? Love it!

Oooh, poor baby! How demoralizing! They probably heard her meow and picked up on that accent.

And poor you, having to now live with a Diva who has seen the world and travelled in extravagant circles. How are you going to keep her content?

Perhaps some visits to the Ren Fests this Summer will help appease her, and would be a nice getaway for both of you.