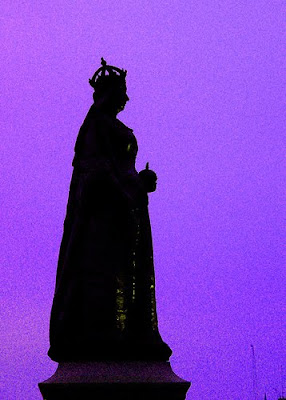 Today in Canada we celebrate Queen Victoria's birthday with a statutory holiday. Woo hoo! It's the first long weekend of summer and is traditionally marked by much drinking of beer while camping. In fact, this holiday is sometimes called the May two-four weekend, the same way a box of 24 beer is called a two-four. We Canadians are nothing if not classy, eh?

Queen Victoria was born on May 24, 1819. I don't know if any other country in the world (including Britain) still officially marks her birthday like Canada does. But she was Queen in 1867 when Canada became a Dominion independent of British rule, so she has a special place in our history for that reason.

One year I happened to be in Victoria, British Columbia on the May 24th weekend. The City of Victoria prides itself on its British heritage. Each year they hold a big Victoria Day Parade which, apart from the usual floats, bands and dignitaries, features lots and lots of Pipe Bands. We luuuuuv bagpipes in Canada. So did Queen Victoria, of course.

have a great holiday

Happy Queen Victoria's Day to you. Our non-traditional start to summer is this upcoming weekend...and boy am I looking forward to the three days off.
Mary

Yes, apparently if you love bagpipes and want to hear traditional music . . . there's no point in going to Scotland. Apparently we've kept the tradition alive here better than they have there . . . or so I've been told by many professional bagpipe players.

They played bagpipes overlooking a hill the day we buried my grandfather...it was breathtaking!

lol Take it from me, it's not celebrated in the UK! I don't think many people even celebrate the current monarch's birthday...

Hope you have a lovely day. :o)

Have you seen the movie "Young Victoria" I wanted to see it so bad but it quickly disappeared from the theaters I think because it wasn't commercial enough. My parents loved it and it won some really quality awards. I also love Victorian times (the scandals, the fashion, and of course Jack the Ripper, pleasant man that he was ; ) I get very emotional when I hear bagpipes even though I'm not Scottish or Celtic. Must be because I have Norwegian ancestry and they had a mixing with the Celts, eh? cheers to you Debra today..

Instead of 24/7 I'm now going to say two four seven. People will think I can't count by twos. They'd probably be right.

~this is a holiday thats calling our name...camping and a little beer celebration...whos to complain! maybe i shall bring this holiday to our state...cause as of now no we do not celebrate her birthday...happy birthday dear queen victoria...warm wishes and brightest blessings~

We love Queen Victoria's birthday in our house. She sure wasone special queen for us Canadians that's for sure!!!!

This is the best and most fun day in Victoria the entire year, I LOVE being there for it! She may have been born on May 24th but she died of my birthday. I've always had a connection to her, much more than I have a connection to beer which I personally think is ghastly. The comment could get me de-Canadianified.

Australia still celebrates the Queen's birthday, though not Queen Victoria's, because Australia is still part of the British commonwealth despite much controversy over wanting to become a republic country free from the 'mother land'. And then it's celebrated on a different day to the Queen's actual birthday. LOL... at the Aussie's black humour of not willing to conform!

Enjoy the beer, I'm sure Queen Victoria would have wanted you to ;-)

May Your Summer be filled with Fun, Love and a dash of Magick!!!
Enjoy!