When you're Ukrainian, you get to celebrate Christmas twice! Once on December 25th according to the current Gregorian calendar and again two weeks later on January 7th under the old Julian calendar. Sweet, eh?

Now, I am not Ukrainian. I don't have even a single drop of Ukrainian blood in my heritage. But I am a major Ukrainian WANNABE! I love Ukrainian culture and food. And I've dated more Ukrainians than you can shake a stick at -- including my Rare One. All four of her grandparents emigrated straight from the Ukraine, making her pedigree 100% Ukrainian-Canadian. SWOON!

Tonight we are going with a multicultural bunch of friends to a charming local Ukrainian restaurant where, once again, we will eat the traditional 12 meat-and-dairy-free dishes which celebrate Ukrainian Christmas. If you're interested in all the details and symbolism of the meal, please check out my last year's posts (found here and here).

Multiculturalism? Psshht! EVERYONE is Ukrainian on Ukrainian Christmas! 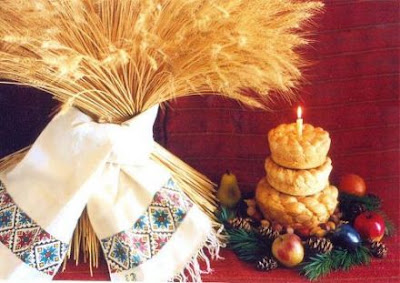 ~you mean we can all celebrate!!! hhhmmm looks like i have some last minute planning to do...wishing you and yours a wonderful ukrainian
christmas...may you enjoy the day being surrounded by those you love and laugh with!!! warm wishes and brightest blessings~

Have a blast with your Ukranian hottie!

Cheers to a wonderful Ukrainian Christmas!

So if I was Ukranian I would have ignored not one but two Christmases this year? Sheesh. Good thing I'm a mutt. I'm going to assume my native american chunk cancels out all the other stuff.

If you cannot *be* Ukranian, be *with* an Ukranian! Happy 2nd Christmas to you and your Rare One <3

Never had Ukrainian food...must try this!!

And a very happy Ukrainian Christmas, to you and yours!

have a great time

Have a great time Debra at the 'feast' tonight. Watch those pirogies
Jim

Yes, I also love the Ukrainian people and their food. One of the sweetest guys I ever dated was Ukrainian. Kolbassa and Perogies, yum. We still eat that food from time to time. But I learned that when I lived in Alberta.

Great way to catch up if you missed anyone on your gift list. Have fun!

I'm 1/2 Ukrainian. But we never celebrated both :(

Hope you have a great time. Happy Ukrainian Christmas!

I missed a Russian Christmas party on the 6th, still kickin' myself at missing out on the lovelies...

Anyway, anyway, anyway - I'm back, although looking a little different. I will keep my previous identity a secret for now, unless you are ultra clever!

Glad to have the chance to stop by again sister ;)

Have a wicked time! =D

...now that is sweet

Yes, my Ukrainian step-father is getting sloshed as I write this, celebrating Ukrainian Christmas! Hurray for more Christmas, 'cause the first time wasn't enough!

I remember the feast you wrote about last year...enjoy this time of extended/expanded? celebration!

I liked your commented words so much, that I added them, to my post. With a thankyou and link to you, of course.

Gotta' grab brilliance, where we find it! Especially when it isn't so easily coming out of my own head. :-)

Thank you, my Friend!

Have a wonderful time, tha wind is brutal, be warm....:-)Hugs

You mean you can't remember that Ukrainian past life?

Love coming to learn so much here. Hope you had a fab time. Thank you very much for the ecard...I hope you like the little gift. I was nervous about it as you know. And thank you for the blog comment. Yes! The kids know...

An extra holiday!! Hope it was wonderful!