O Say Can You See 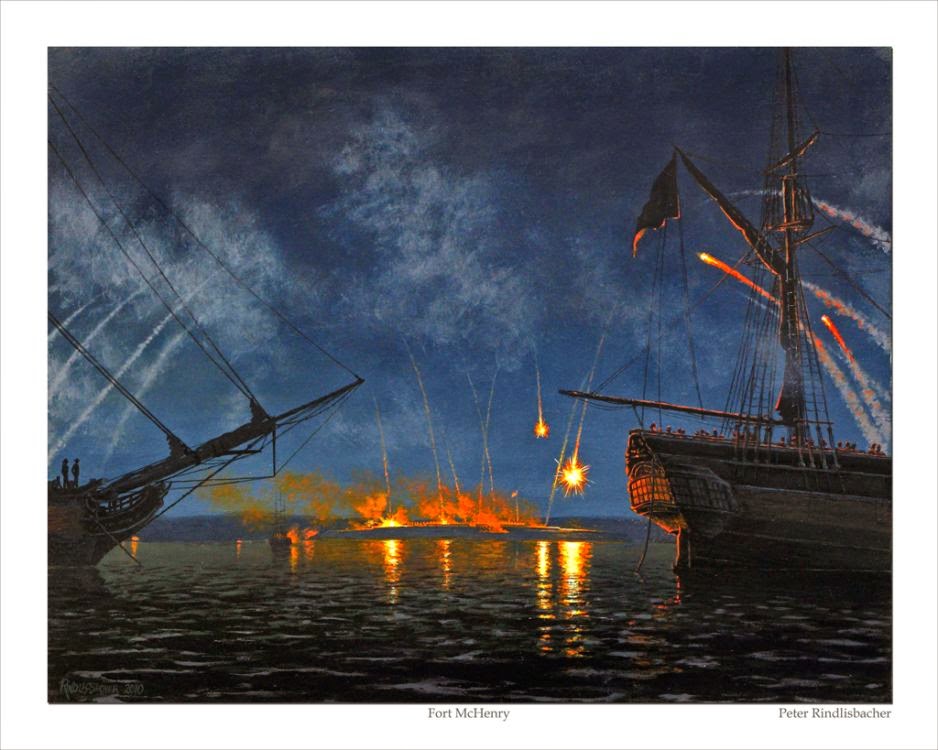 The best thing the Americans got out of the War of 1812 is their truly great national anthem. Its lyrics were written 200 years ago today.

A young Baltimore lawyer named Francis Scott Key witnessed the bombardment of Fort McHenry by a fleet of 19 British warships. The attack started on the evening of September 13, 1814 and continued all night. As dawn broke on September 14, he could see the enormous garrison flag still flying through all the smoke and debris and was inspired to write his famous poem. 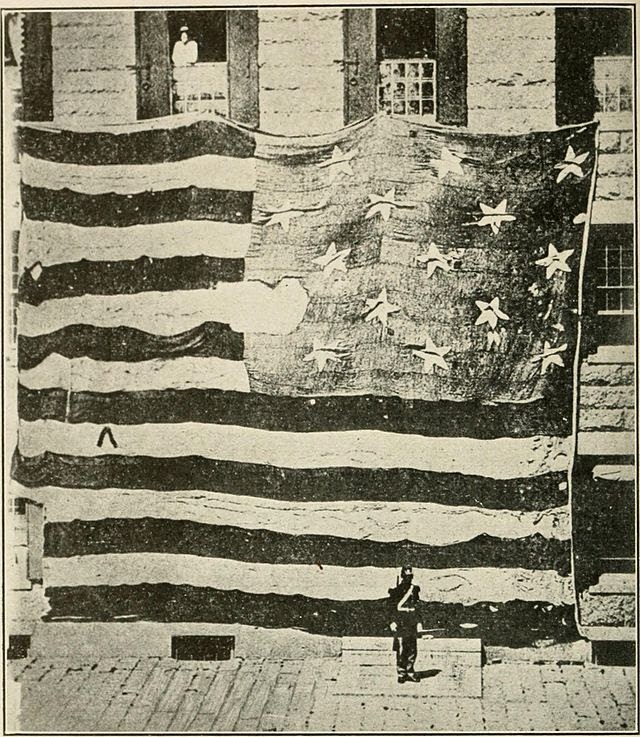 Francis Scott Key's poem was later set to the music of a popular song called To Anacreon in Heaven and renamed The Star-Spangled Banner. I think it is one of the world's great national anthems of freedom and defiance, right up there with La Marseillaise of France and The Internationale of pre-Stalinist Soviet Russia.

O say can you see by the dawn's early light,
What so proudly we hailed at the twilight's last gleaming,
Whose broad stripes and bright stars through the perilous fight,
O'er the ramparts we watched, were so gallantly streaming?
And the rockets' red glare, the bombs bursting in air,
Gave proof through the night that our flag was still there;
O say does that star-spangled banner yet wave,
O'er the land of the free and the home of the brave? 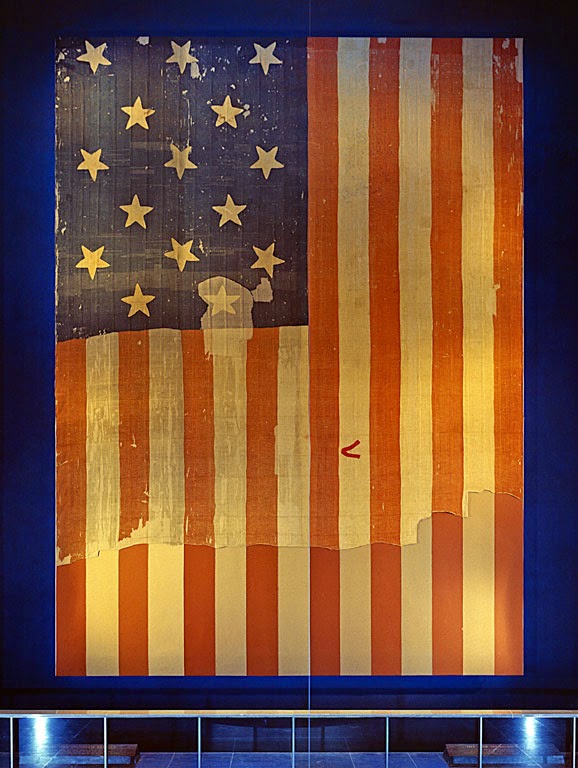 Today, the original Fort McHenry flag is preserved and displayed at the Smithsonian in Washington, DC.

I agree it's a great one. But, talking about anthems, I have to admit I don't even know the national anthem of Canada :-/

I've never looked at the lyrics to that song, it's really, really beautiful. Australians are a bit indifferent to our national anthem. It became outdated pretty quickly.

Personally, I'd like to see it changed to this. The last verse honestly brings tears to my eyes.

Beautiful, but the hardest thing to sing and so easy to forget the words as you try to stay on tune! I'm always amazed at the renditions I hear and think "just sing it the way it's written" ... for pity sakes ... it is the national anthem!
(can you tell it's one of many soap boxes?!!!)
ox

I have to admit that it is a very nice anthem. Canada's always seems to be missing something.

That's the flag?!? It's enormous! That thing could tarp my entire house. I suppose if I saw that giant thing flapping after a battle, I'd be inclined to write some sort of poem too. Probably not as good, it may have been a haiku.

O'Canada is pretty good too.

Though being Murica, we are so lazy we only sing the first paragraph

Thank you. It is a very moving prose.

I love our anthem even if it's the hardest song to sing ever.and I love oh Canada...
and I'm almost 71 and I have never been able to sing the anthem with out crying at the end...being a brat I think I have more of a understanding of our anthem and the flag.being raised into other states and countries..sometimes that was the only thing that was from 'home'...

I don't think I've ever heard American anthem... not that I have any wish to do so :)

It is a great anthem...and I've always loved the Russian one too!

At the risk of being booed and hissed, I am not so sure I agree with this one. What comes to mind when I think of an emotional national anthem is the famous scene in Rick's Cafe in the movie, Casablanca. In it La Marseillaise breaks out spontaneously and effectively drowns out the German Uber Alles. Now THAT anthem, to me is stirring and inspiring. Every time I see that scene, it brings tears to my eyes. The words are eloquent, but I just can't see the cumbersome American National Anthem evoking the same response. It just isn't singable to the average voice.

America the Beautiful would be a much better choice, methinks.

Jadedj, I always want to cry at that scene in Casablanca too! And at the last two lines of the Star-Spangled Banner. I agree though, damn impossible to hit that high note.

I remember when I was younger that I would always hear the words for the anthem but never really register what they meant. The first time I really listened and thought about the words and what they meant, it touched me deeply. Gotta give the writer kudos for it still being a great piece today. haha

I do love the SBB, but boy it's hard to sing! Have a happy week!

I is a very powerful anthem. It always makes me think of hockey but I'm sure if I was an American i would think very patriotic thoughts while it was being played!

I salute you, Debra. You're more patriotic than most Americans. I appreciate our national anthem more now.

Have a great new week.

I've always loved the American national anthem. It has such a great sound to it. I also like the Greek National anthem, which is based on the Hymn to Liberty (or Hymn to Freedom); a poem that was inspired by the Greek revolution of 1821 against the Ottoman Empire.


On the shore, dimly seen through the mists of the deep,
Where the foe's haughty host in dread silence reposes,
What is that which the breeze, o'er the towering steep,
As it fitfully blows, half conceals, half discloses?
Now it catches the gleam of the morning's first beam,
In full glory reflected now shines in the stream:
'Tis the star-spangled banner! Oh long may it wave
O'er the land of the free and the home of the brave!

And where is that band who so vauntingly swore
That the havoc of war and the battle's confusion,
A home and a country should leave us no more!
Their blood has washed out their foul footsteps' pollution.
No refuge could save the hireling and slave
From the terror of flight, or the gloom of the grave:
And the star-spangled banner in triumph doth wave
O'er the land of the free and the home of the brave!

Oh! thus be it ever, when freemen shall stand
Between their loved home and the war's desolation!
Blest with victory and peace, may the heav'n rescued land
Praise the Power that hath made and preserved us a nation.
Then conquer we must, when our cause it is just,
And this be our motto: "In God is our trust."
And the star-spangled banner in triumph shall wave
O'er the land of the free and the home of the brave!

I have never seen the words to this anthem either, Debra. Thanks for posting and the history behind it.

Forgive my jaded, cynicism, but hearing that song just reminds me I have 5 minutes to get a beer before the football/baseball/hockey game starts. Interestingly, that's not the actual flag at the Smithsonian. For more history: http://www.washingtonpost.com/opinions/on-its-200th-anniversary-five-myths-about-the-star-spangled-banner/2014/09/11/aa2cab5c-3830-11e4-bdfb-de4104544a37_story.html

OMG Dexter -- you mean Wikipedia is WRONG?!? LOL, thanks for the link. I think the author has overstated the War of 1812 as the "second War of Independence" though. The US declared war against Britain as an act of pure opportunism and aggression.

I remember seeing this when I was a child, and our tour guide at the time was so passionate about discussing the history of the flag. It was a very moving presentation that I never forgot.

Dumbest song EVER. It's, like, two octaves plus ... hardly anyone can sing it right unless they start at their lowest pitch. The words relate to one incident. However, one thing I won't complain about: It doesn't have God in it! I'm sure they're trying to re-write it even as we speak.

I never really thought our anthem was that great. I would have preferred "America the Beautiful" (esp Ray Charles' version) or maybe "God Bless America."

One of the reasons I enjoy watching the Olympics is to hear the many anthems, it's joyful to watch the participants' reactions. Ultimately the win is for them, and country second, I think.