We traveled down near the American border to visit Writing-on-Stone Provincial Park. It is a small badlands coulee of sandstone cliffs and hoodoos found along the Milk River. For untold generations, it was a gathering place of the Blackfoot people. 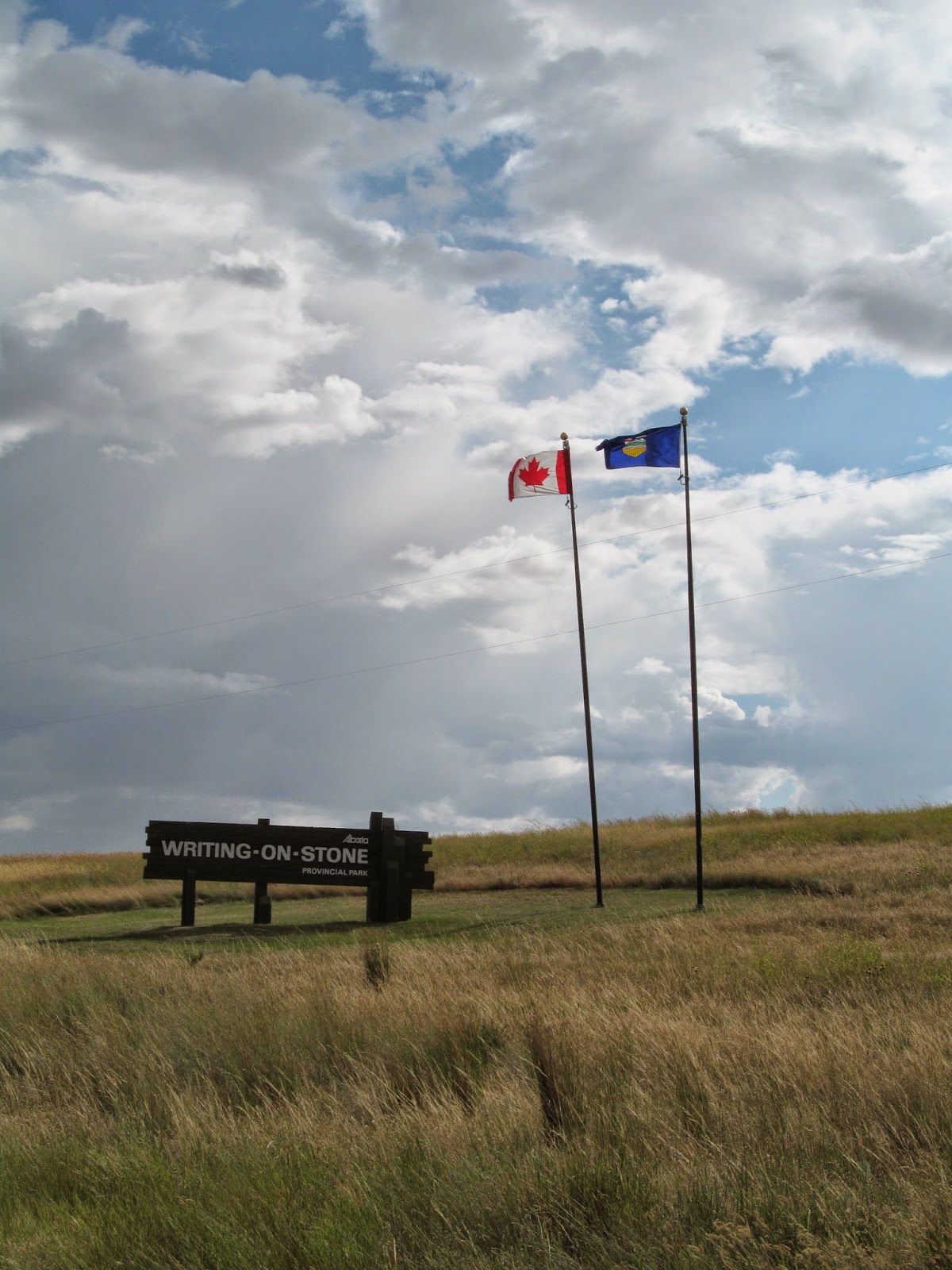 It has hundreds of spectacular hoodoo formations created by time, wind and erosion. If you're familiar with southern Alberta, just let me say that the hoodoos of Writing-on-Stone put the hoodoos of Drumheller to shame. There's no comparison! 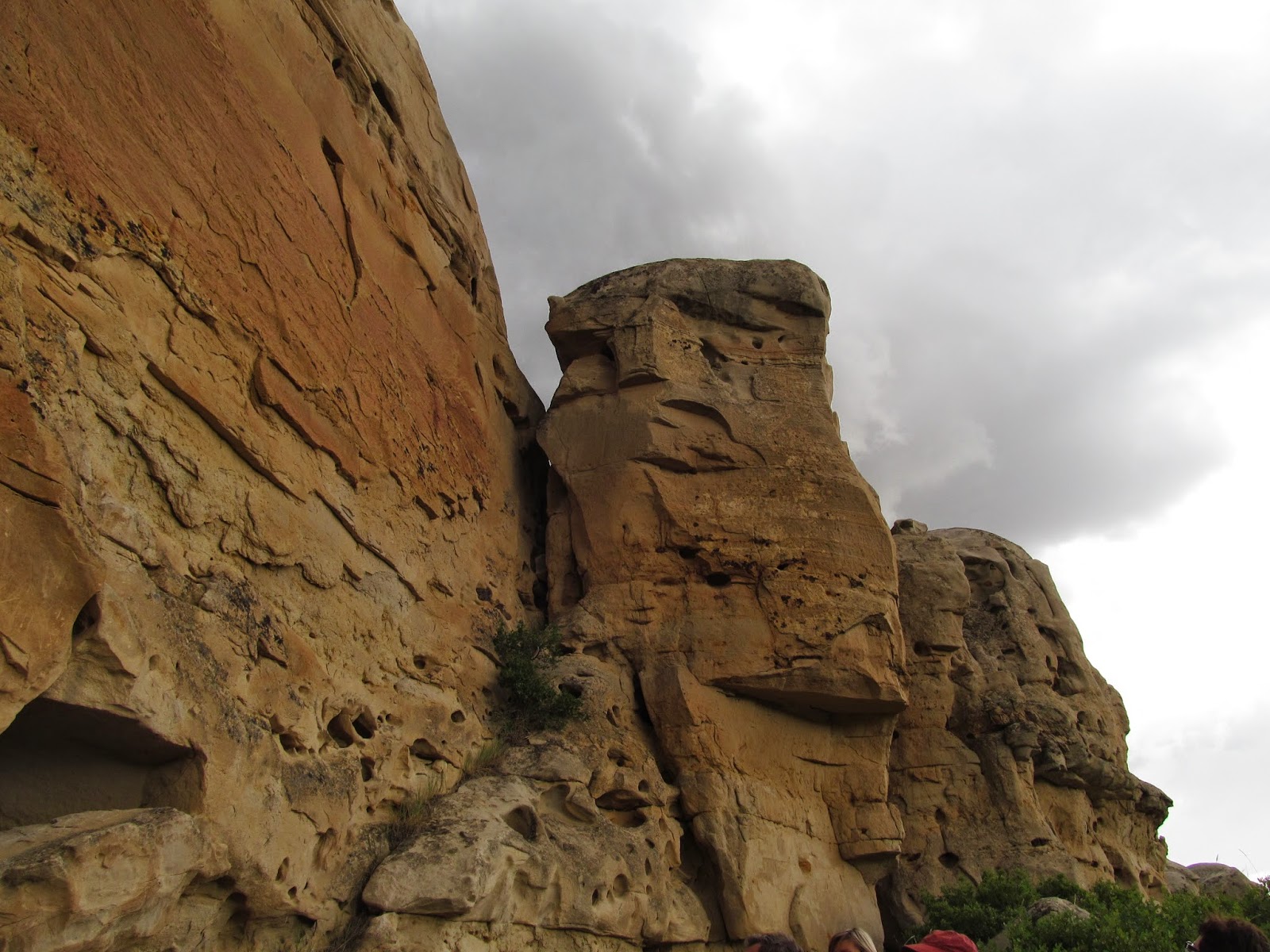 But what makes Writing-on-Stone even more special are the ancient petroglyphs (drawings) carved into the cliffs by the Blackfoot people. This awesome art was made before the days of first contact with Europeans and tells the stories of epic battles and buffalo hunts. To protect the petroglyphs from being vandalized, entry to the area where they are located is restricted and the petroglyphs may be viewed only under the supervision of a park guide. 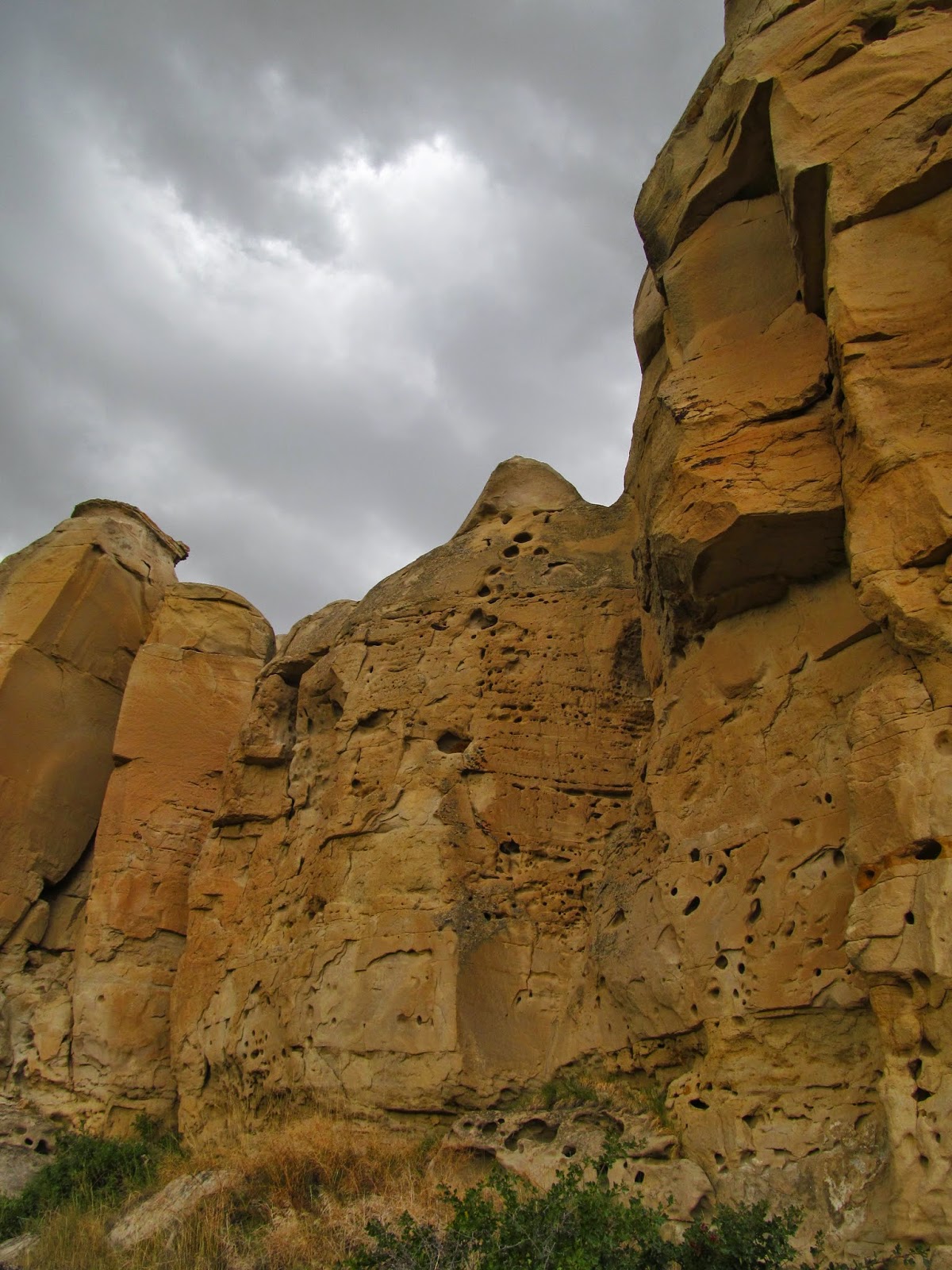 Southern Alberta has the reputation of being the redneckiest part of Alberta so just to reinforce that stereotype, here's a photo of a lovely handcrafted antler display that we saw in the nearby town of Milk River. Love the howling wolf garden ornaments beneath it too! 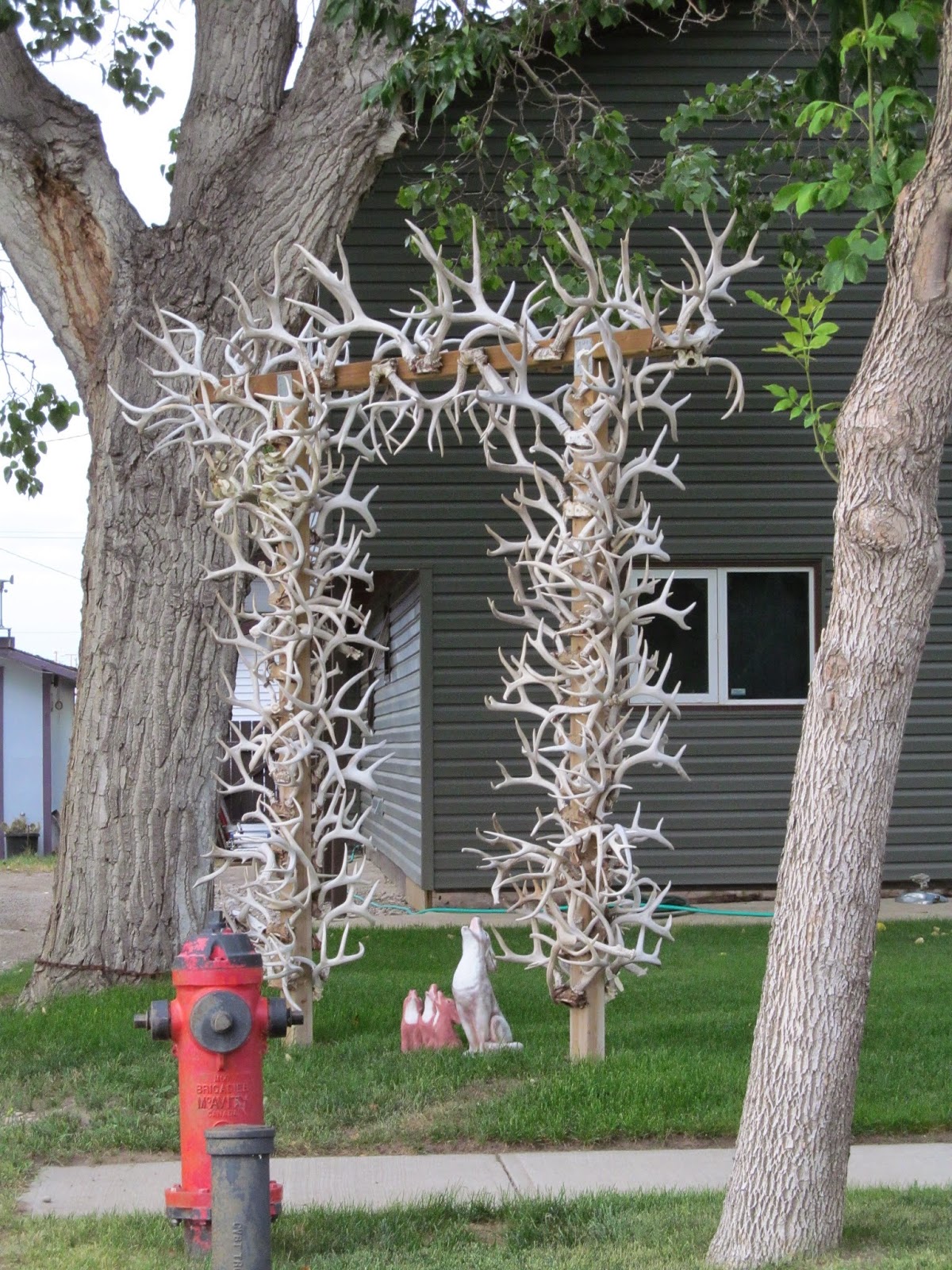 Next we visited Fort Macleod, original home of the Northwest Mounted Police. This paramilitary force was created in 1873 and sent west to control the worst excesses of the frontier whisky and fur trade. Later on, the NWMP was renamed the Royal Canadian Mounted Police. 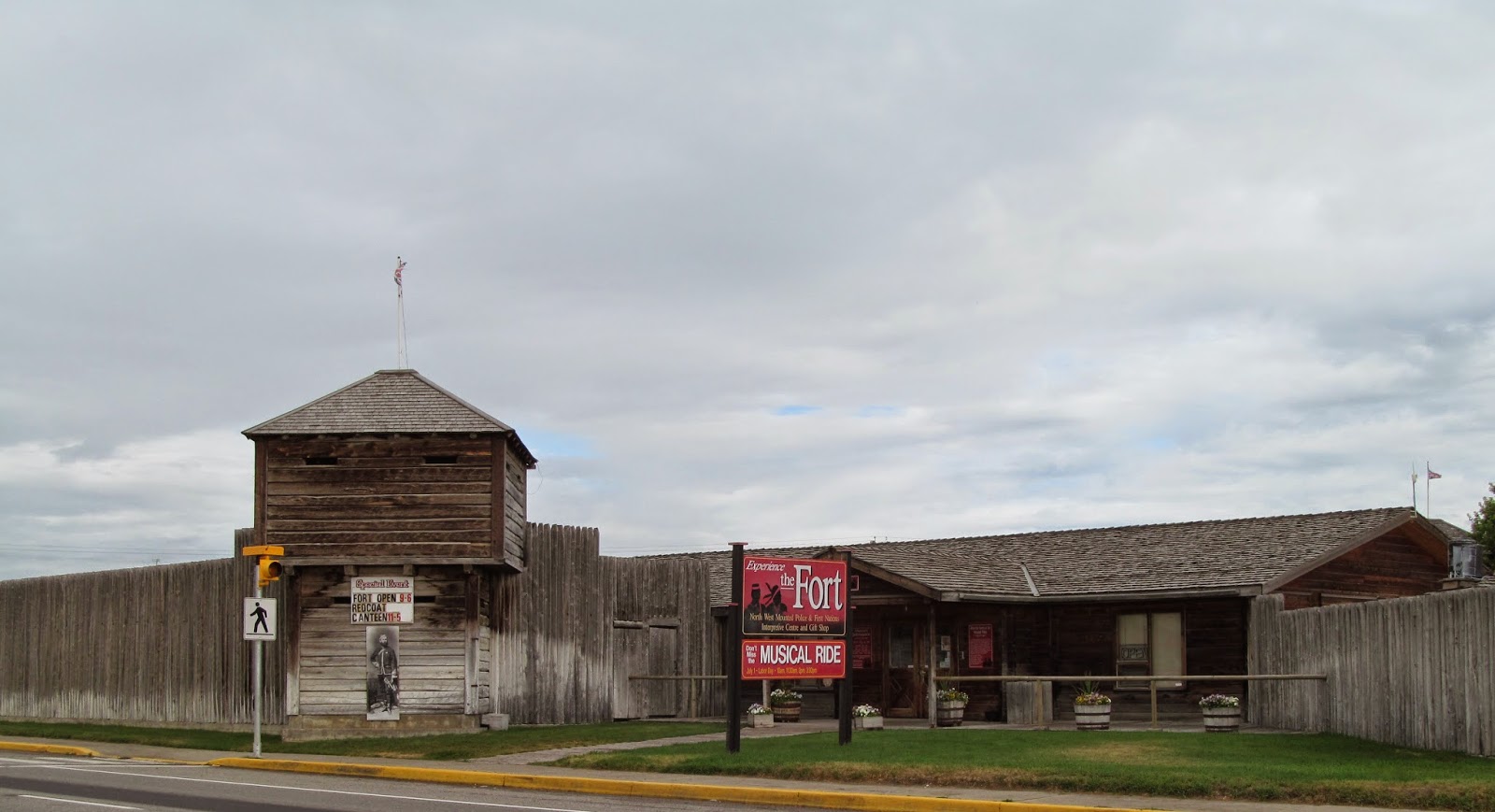 The Fort has excellent displays of pioneer artifacts and NWMP history. 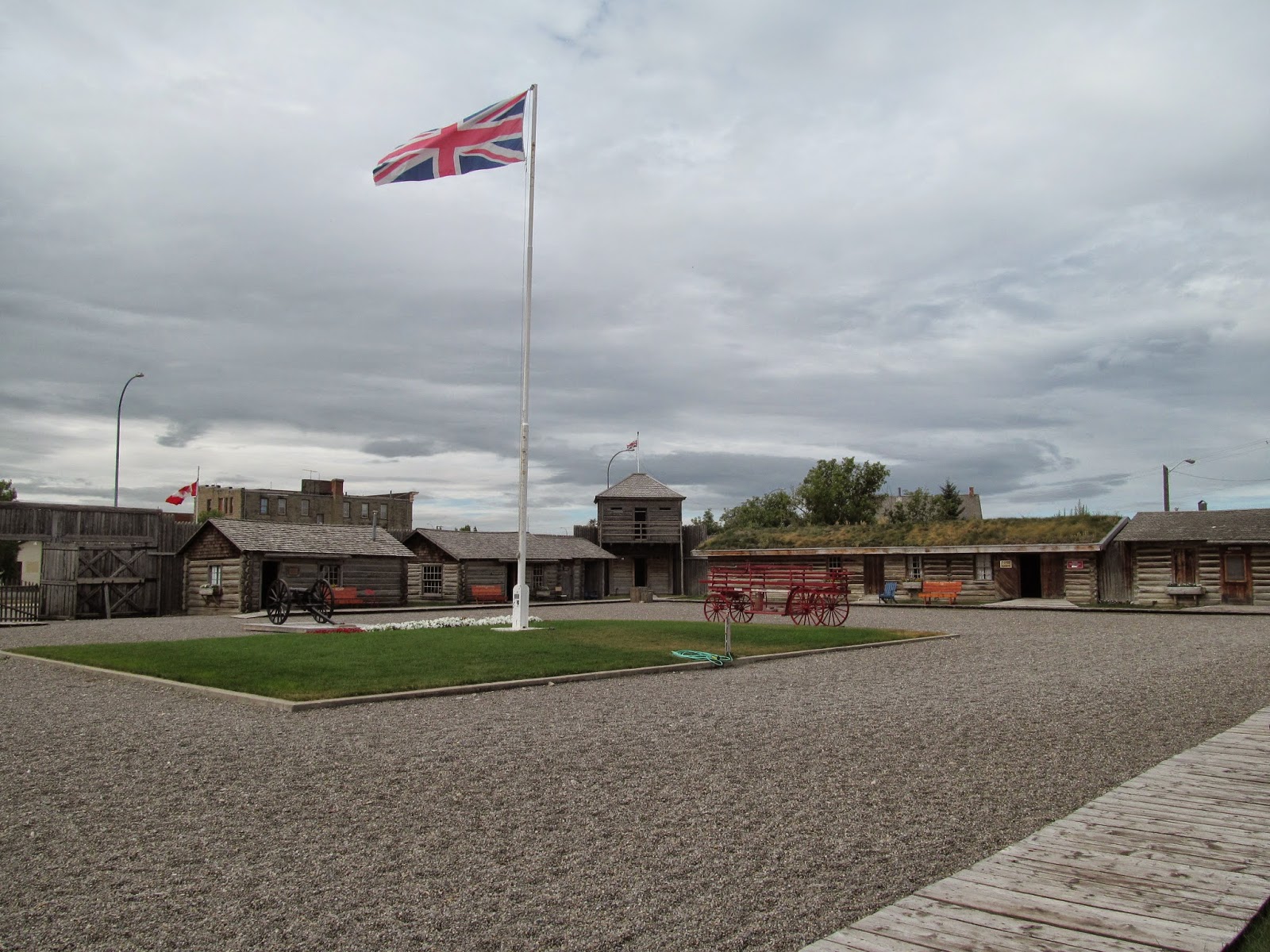 Local students portray the NWMP and perform a Musical Ride several times each day. As you can see, Mounties originally wore white British pith helmets instead of flat-brimmed brown Stetsons. But the red serge jackets and single-stripe cavalry pants are essentially the same (dress) uniform still worn today by the RCMP. 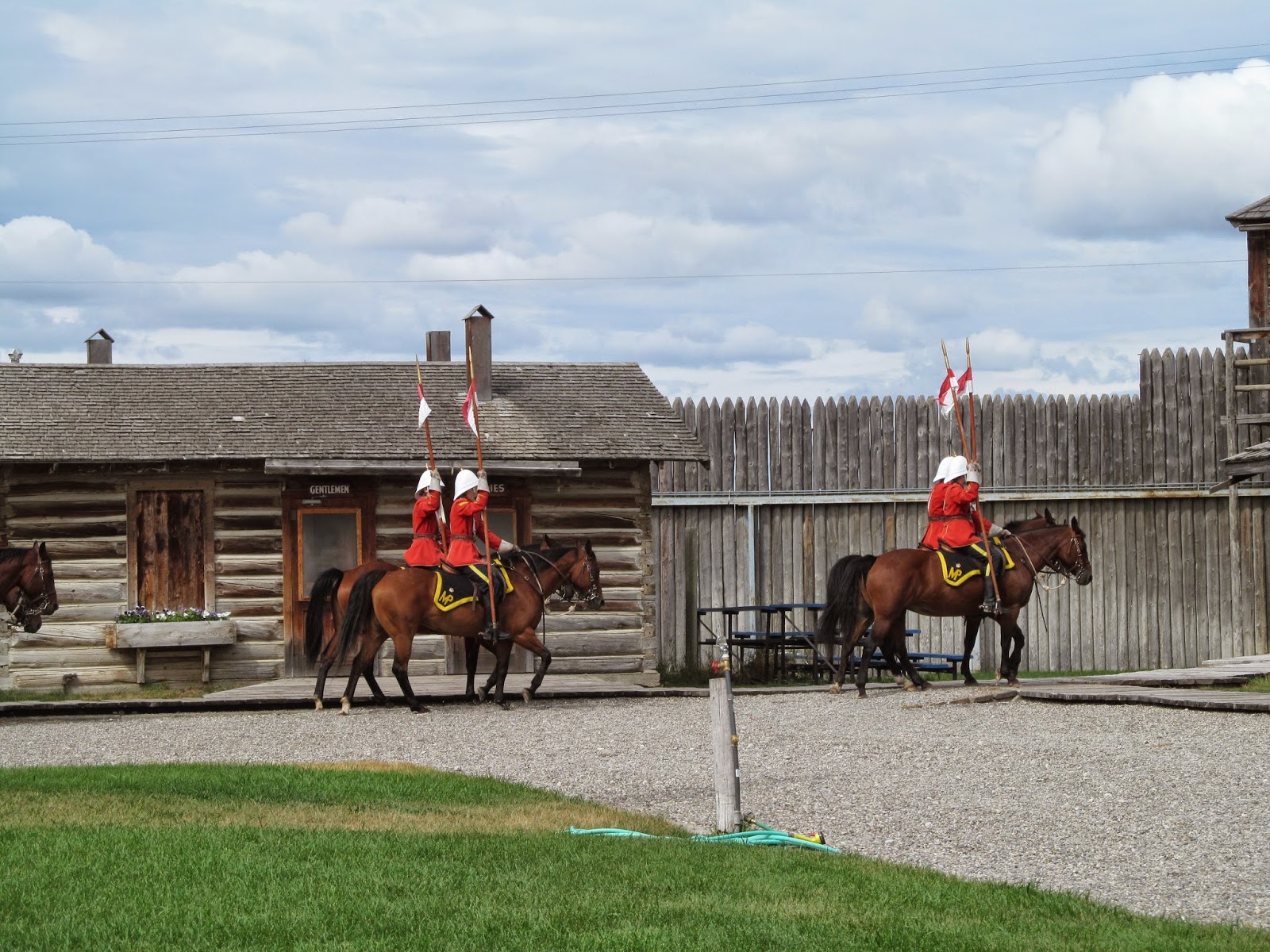 i like the mounties much more with the stetsons! that antler arbor is really cool.

Guess I need to see more than Edmonton and Calgary! This looks really fascinating - I would love to tour the NWMP fort some day and FOR SURE see the Blackfoot art!!

hope it's not from real antlers....

Oh yes, Dezzy, they are real.

I'm gonna let my family in Warner and Milk River know they're considered the redneckiest in all of Alberta. Although I'm quite sure that won't come as any surprise. ;)

And that antler display has given me a great idea for my front gate. Thank you, Debra!

This is so awesome! Hoodoos are some of the most interesting rock formations. And add petroglyphs on top of them - Very Cool! I never woulda imagine that in the rolling plains of southern Alberta. :o)

And then a visit to Fort Macleod! I grew up watching Sgt. Preston and fell in love with the wilds of Canada. How fun! Question - Where did all the lumber for the fort come from? Were there more trees/forests there back in the early days?

re:Antler Arbor - I see those all over here in Colorado. After reading some of the comments, I realized that something I take for granted can be most unique and unusual to others.

Hi Jeanne -- I don't believe there were a whole lot of trees in those days on the grassland part of the prairies but there would have been lots in the foothills/mountains or up north. So I suspect transportation of wood was required for large complexes like a fort.

Awesome pictures, and what beautiful countryside. If I were a traveler I'd be sure to visit.
Mary

I thoroughly enjoyed these two Alberta posts, Debra! I've been through Vulcan, but I think it was before the Enterprise landed. I remembered how shocked I was at the age of sixteen to learn that Canada had interred Japanese Canadians during WW II. My father was my history teacher at that time, and I was really angry. I had grown up fascinated with WWII and distraught over concentration camps ~ I felt betrayed that my parents had never told me about the American, and especially the Canadian internment camps. I'm glad that Canadians created these lovely gardens. I dearly want to see Writing-on-Stone. Have a good one!

Wow!!!!!! How picturesque is that!!!! A great place to contemplate life!

Makes me feel bad that I never have experienced Alberta like this. Too busy planning out the mall. Shame on me!!

Amazing! I feel like I'm in a totally different world looking at these photos! I am crazy about road trips; you get to see so many cool things. And I love that the petroglyphs are protected. That is such a great idea. You just never know what morons will do when left unsupervised.

LOVED these photos! I hope you create more and more blog posts like this one. Perhaps you'll share some images of where you live and the surrounding areas you visit. I've never been out west, and it's wonderful being able to experience it through fellow bloggers' posts. Until I get there.

Howling wolf garden is very cool.
Mounties are even cooler ,love the Canadian mounties.
Glad you and the Rare One had a wonderful trip.

I think I've been to Fort McLeod, but I'm wondering why I never visited Writing on Stone. It looks amazing. Thanks for the virtual tour. It's going on my list of places I must visit North of the border.

You and Martha do killer jobs and adventure photos.

PS:No masks for me. I'm silly but not that silly.

Love the antler display. Looks like an interesting place to visit.

Another great post! I am really enjoying this trip!
That antler and howling wolf display is kind of cool! I guess I am a redneck! LOL!
Hugs ;o)

A wonderful holiday exploring the galaxy and a transplanted Japan. Perfect!

So happy your friendship remains strong and you guys get to spend time together. ♥

As you can see, the comment above was meant for the earlier post; I blame it on my messed up vision. *sigh*

I can't think of the mounties with out thinking of Bonnie..from the rest haven..when she and her sister were younger they took a cruise and Alaska and Canada were the destination..on board there was a mountie and she was thrilled to death. she got her picture taken with him and it was the high light of her trip..when I had the Canaderian cooking class .Bonnie sort of lurched to her feet and sang the Canadian national anthem..she plopped back in her wheelchair and said I don't know where that came from..and laughed..when I told Laurent and will they loved it so they sent her a rcmp tshirt..it got kilt in the explosion so they sent another one to her..she still tells people she has two boyfriends in Canada..

Can I just say...I would hate to run into those antlers in the dark.

Looking at these pictures, I feel like I am looking at another world and another time.

I'm always quite taken with your travel posts. Thanks for sharing the historical stuff along with the current-day stuff. Hoodoos - awesome! Petroglyphs - more awesome!

"Redneckiest" still laughing at that one. Brilliant tour Debra, I learning so much :-)
Di
xoxo

Redneck has such negative connotations, to me it means KKK friendly. I thought those decorations were just kitsch in a way, but lovely also.