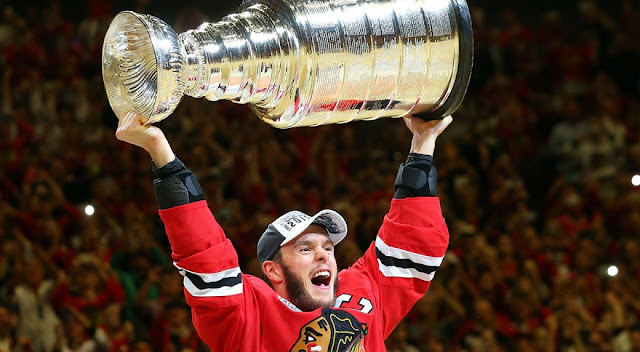 Following the elimination (alas) of all our Canadian hockey teams from the Stanley Cup playoffs, My Rare One and I switched our allegiance to the Chicago Blackhawks because their Captain is that good Winnipeg boy, Jonathan Toews. And here he is hoisting the Stanley Cup which the Blackhawks won last night against the Tampa Bay Lightning! YAY!!!

In the midst of this celebration, however, there is one sad note, at least for me and I'm sure for many other Canadians "of a certain age." This will be the final hockey season and final Stanley Cup playoffs broadcast by the CBC. Starting next year, Rogers Communications owns the exclusive franchise and hockey will no longer appear on the CBC but on Rogers' own sports channels. Over the years, the Conservative government has eroded CBC's funding so badly that our public broadcaster could no longer afford to keep the broadcast rights. It's the passing of an era and I regret seeing the end of CBC's iconic role. 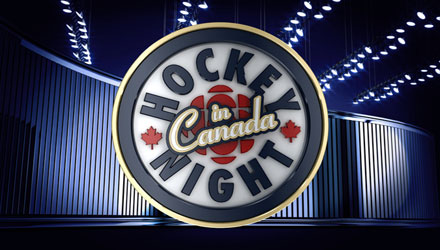 NHL hockey and the CBC have been synonymous in Canada since the 1950s. Some of my earliest childhood memories are of watching hockey on our grainy little black-and-white TV every Saturday night. Followed right after the game, of course, by the musical stylings of "your pet, Juliette" -- now that really dates me, LOL! 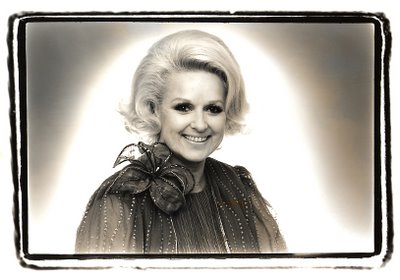 Wait, there's not going to be Hockey Night in Canada anymore!?! NO! You're kidding. I don't watch hockey, nor am I Canadian (we can't all be perfect) and even I know that Hockey Night in Canada is an institution. Don Cherry is still going to work, right? By the way, is it a coincidence that Don Cherry has developed the coloration of a cherry? He's super red, how does that happen to a normal human being, let alone someone named Cherry?

I don't follow the game, but do know its a big thing over there. Have a nice week!

No, say it isn't so! Not being a smartass here, just can't imagine no hockey night.

Have you ever played hockey yourself, Debs? :)

so, it is finally over. when the pens aren't in it, i don't watch. it sure is a long season when you win the cup!

It is very sad about the CBC. NHL hockey and the CBC definitely go together. It brings back so many memories for me, especially watching the games as a kid with my two older brothers.

Can't wait for the next election of the next bobble- head......Yes hockey & CBC are many Canadians fondest memories, Yeah a Canadian boy ( which rock many NHL leagues) we are slowly loosing any identity sadly. Anyway!
How nice to see Bono in Parlement yesterday! Now that would be FUN for Prime Minister! xDebi

@ Pickleope -- Next year all the games will be broadcast on Rogers' own sports channels. I don't know if they get to keep the name "Hockey Night in Canada" but even if they do, it won't be the same. They'd be crazy not to keep Don Cherry but I'm not sure what's happening there. Yeah, Grapes is a real piece of work, isn't he?

Wait the sport with stick is hockey right?!?! Don't they only play that in the winter???

I can't even describe how irked I am that CBC isn't hosting Hockey Night in Canada anymore. Not a Blackhawks fan, but it was nice to see Toews hoist the cup!

When we lived in Washington state as well as Alaska, I can remember seeing Juliette .......Sad times indeed!

Leave it to the government to screw up a good thing. It's sad when things that have been institutions in our lives, that carry so many memories come to a close.

bastids..
I'm going to start now praying to the Goddess for an all Canaderian play off next year..I'm sure she's agreeable..she loves Canaderians too.

I guess I'm a one team man. If the Habs don't play, I don't really care.

A friend of mine was rooting for the Lightning. She was super disappointed they didn't win. Man, I haven't watch a game of hockey in a LONG time.

Oh no, does this mean the end of Hockey Night in Canada? Many a Saturday night I would watch, way back when there were only the original six.

Speaking of the Blackhawks, when I was a young teenager living in Vancouver, I worked for the folks who sold food and drinks at sporting events. I got to see Bobby Hull and Stan Mikita up close before the game the Blackhawks played against the then minor league Canucks. Yes, I'm that old.

Yay Blackhawks. Did I really say that, eh!

Oh GAWD....no hockey on Saturday nights at the cottage?
What will Don Cherry and Ron McLean do?
Tee hee hee....
Cheers!
Linda :o)

Sorry to read this, Debra. Not going to be the same, I can understand that.