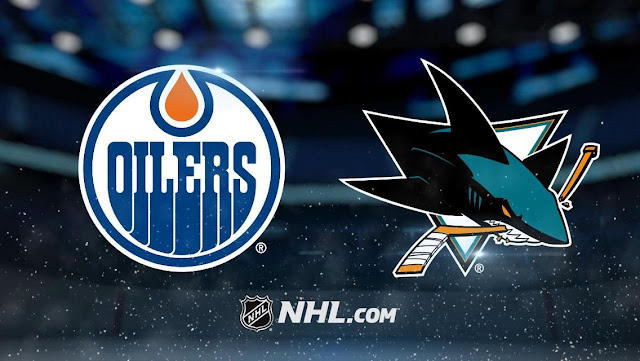 Huzzah! The Edmonton Oilers have advanced to the second round of the Stanley Cup playoffs by defeating the San Jose Sharks, taking the best-of-7 series in 6 games! How sweet it is to a city that's been shut out of the playoffs since 2006!

You know, I don't even need to watch a game on TV to know when the Oilers win. I've mentioned before that I live about 4 blocks from Edmonton's new downtown arena, Rogers Place. Whenever the Oilers win, the entire arena of 18,500 fans ("the Orange Crush") empties out into my neighbourhood, cheering, screaming, partying and driving their vehicles up and down the street with flags flying and horns honking. Until after midnight. So all I have to do is wake up, note groggily that the Oilers must have won, and go back to sleep. 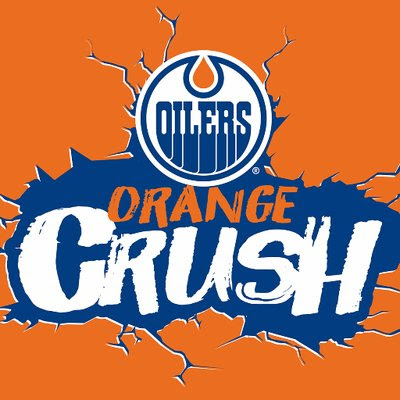 And this is the case even if the Oilers are playing an away game, such as they did Saturday night in San Jose. Rogers Place still sells out and the crowd simply watches the game on the huge TV screens over centre ice. For the away games, seats are just $5 each and all the money goes to charity. Pretty sweet deal that allows people to go to Rogers Place who otherwise couldn't afford a series ticket to a home game. Plus, of course, all the die-hard fans who will attend any Oilers-related event. 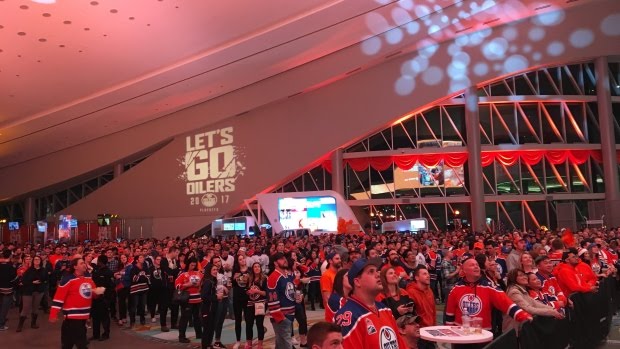 So bring on the Anaheim Ducks! I don't care if I get no sleep at all for the next three weeks, if it means the Oilers defeat them and advance further in their quest for hockey's Holy Grail! 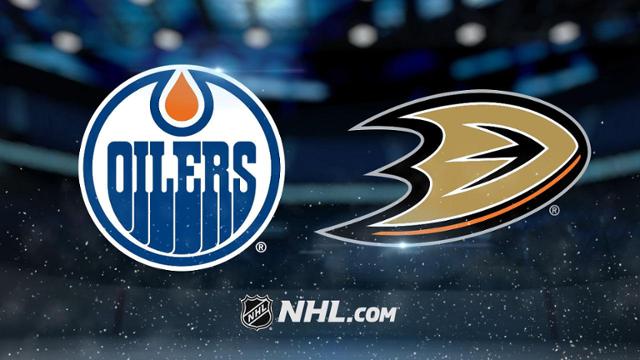 that is a nice gesture regarding the away games. :)

down here, the greedy owners would probably charge the same amount as a home game and keep all the money for themselves. :(

What Anne Marie said. A great idea for away games.
the Ol'Buzzard

I've no idea whatsoevah which sport is that :)

Great for the Oilers and their fans!

It's crazy that they will still sell out the arena during an away game so everyone can watch the game on the big screens, but it's cool the money goes towards charity. You Canadians really do take your hockey pretty seriously.

we have the same thing here for away games and when they are playing at home, they put a huge screen outside of the stadium so fans without tickets can watch too. maybe we will face off for the cup!

Big sports and charity going hand in hand? Who knew? But ... bravo!

That is so great that the stadium televises away games for a small charitable fee. It is actually brilliant!

I sure hope the Cup goes to a Canadian team this year! Go Oilers! :o)

Hi Debra :) I used to be a big Habs fan, but I guess I gradually lost interest over the years and I haven't watched a game in over a decade now. I remember the thrill of it...the Canadians vs the Kings (1993???)...Anthony Robbins was their motivator and travelling with them. I shook his hand after waiting to see Gretzky in person, and I was more thrilled about Tony Robbins than the Great One lol...

I always knew an oiler could beat up a shark.

Seriously, though, that's kind of cool to have something like that so close, where you really feel like you're part of the local action whether you are or not.

Although it would probably suck if you weren't an Oilers fan.

I love sports fans passion. I don't understand it one single bit but it is fun to observe it.

I've been wondering why some people all around here are flying tiny little flags from their cars. Go Oilers, please put the Ducks out of my misery.

You know, I SHOULD like hockey. But I don't. I have tried and I can't. So bring on football anytime for me and I am your gal. Go ESKIES!!!! :)

I wish hockey was more popular down here

I love that the money goes to charity. USA team owners would never do that. They're too greedy. As for the Oilers winning over the Ducks, seriously? Are you mental? I laugh in your hockey face mask. BWAAHAHAHAAAHAHAHAHAAAA! The mighty Ducks will set the ice on fire! YES! We will own it! BWAAHAHAHAAAHAHAHAAAAAA! *cough cough* HAHAAAHAA! *cough*

@ Leeanna -- Soooooooooo, I've flushed out a DUCKS fan, have I? The Oilers are going to soak those ducks like the Exxon-Valdez, my friend. Get out the dish soap, they'll need it!

Good for the Oilers! The Ducks will be tough, everybody is safe now that the Blackhawks are done.(I still do not know how the heck that happened! Stunned really) But my money is still on the Cap's this year.

I don't know anything about sports, but if your happy, I'm happy. And I don't know what,Anne Marie is talking about. I don't think Philly teams win many games, lol!!!!!

I am a bit of a hockey fan - the fans in Atlanta are so fickle, they can't support a hockey team. We've lost the Flames and the Thrashers. I got to sit in the press area at a Thrashers game once - that was so cool. And we got to go in the locker room to watch the interviews after. (I was back in school to finish up a degree as an adult).

So I've watched the play offs here and there on TV. That's so funny that you can tell if they've won, since you live so close.

A wonderful initiative for the away games. Now I'm still trying to figure out the Ottawa fans I know who keep posting "Go Sens Go!" - where exactly do they want them to go?

Well here's to load of sleepless nights for you then!

@maddie - the phillies won all 3 games this past weekend. bite me! :)

I love your enthusiasm. Enjoy!

After beating sharks, ducks will be nothing. And who needs sleep anyway?

I don't follow hockey, but being from the SF Bay Area, I'm sort of aware of the Sharks. And the one thing I know is that no matter how good their regular season record, they will always make an early exit from the playoffs.
Congratulations, Canadian team. Good luck the rest of the way.

If they lose (not that that ever happens) are people silent and tearful?

@ Rawknrobyn -- Yes, tearful and silent unless they riot, of course. Ha ha, seriously though, that hardly ever happens. Just once in a while.

Sigh. I was supporting the Sharks. I used to live near there, and all of the professional sports in the Bay Area are either in San Francisco or Oakland. It was nice to see little old San Josey get a pro team. (Note: the SF Forty Niners now play and practice in Santa Clara, which is closer to San Jose than San Francisco, but they are still from the behemoth to the north.)

For one of the games, my Canadian neighbors invited me to the pub to watch the game with them. Awkward! Still, we had a good time and never came to blows.

I'm now supporting the Oilers. All in for Edmonton!!! (Neighbors are pleased.)

@ e -- I hope the game you watched with your Canadian neighbours wasn't the one where the Sharks shellacked the Oilers 7-0!

But now that you're cheering for Edmonton -- Welcome to Oil Country!

Good idea for away games..I don't know what they do here..Good luck!!!

The Nashville Predators finished off the Blackhawks quickly so Chicago is pretty quiet. I think going to stadium to watch a home for a reasonable price is better than a stuffed sports bar.

While I don't follow pro hockey any more, it's nice to see that there's still rabid fans out there, even with the t.v. ratings in the dumps here in the US for the playoffs. Too bad that the NHL can't get its act together to properly market the league.

I don't know anything about sports (really), but enjoy and boogie boogie.

Go Oilers!!! Since the Maple Leafs are gone now!