I came across this funny story last week while idly surfing the net. At a recent medieval re-enactors event, one helmeted warrior impulsively knocked a photography drone out of the sky with his spear. Maybe he was pissed off because it was a modern anachronism and not historically accurate? Who knows? But here's how it looked from the drone's point of view!

Anyway, the warrior felt bad and offered to pay for the damage to the drone. But the drone's owner was so impressed by the warrior's feat of arms that he suggested organizing a competition next year for spear warriors to compete at bringing down drones disguised as flying dragons. Plans are currently underway.

The original daring act of skill and bravery has now been memorialized in a runestone as well. Who says history is dead? 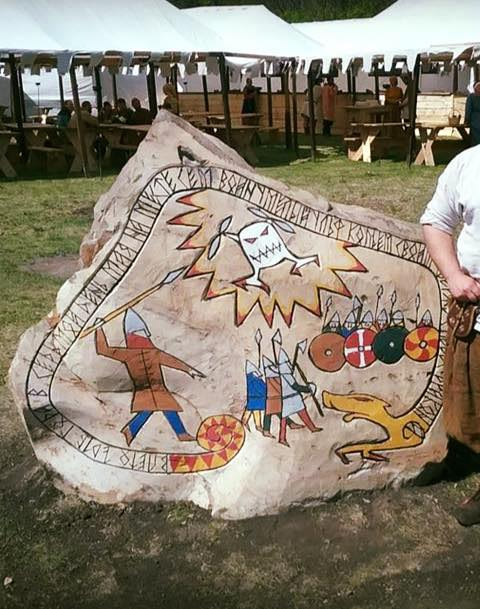 Let the mead flow as the bards recount this mighty tale across our lands!

cool! just another piece of bullshit in life we DON'T need!

I love that the community embraced it. And now they're going to make dragon drones? Awesome. Well done, Ren-Fair nerds.

What a great story! And I'm surprised the drone's owner was so easy-going about the whole thing.

Love this story! What a great outcome!

any chance they tie Justin Bieber to the flying drone-wannabe-dragon?

i love the runestone!

Haha! One strike for mankind against the machines! I dread the day when our skies may be filled with drones carrying God knows what! The first part of the story was great, but the second and third parts were awesome too: a runestone commemoration and flying dragon battles, wow! This story gave me a good laugh with my morning coffee!

OMG. I love this. Sending it to Tim.

This rocks! I love how cool the drone owner was about it and they turned something that could've been ugly into an awesome event.

I am thoroughly jealous of that runestone.

Love this story. I want to fly a dragon drone.

SO COOL!!! Drone dragons will be awesome. I would love to see that.

Cool !! Thanks for the Smile, dear Lady Debra... My Friend will enjoy this one... and the "Rune-Stone" was Great...lol

That great! What an excellent plan for a future battle.

Turning lemons into lemonade. Good for them.

This is just so fantastic!!

Wonderful! I saw the original story and thank you for posting the follow up. Very fitting indeed!

Surely some Bard will immortalize this mighty feat in suitable verse to be sung in the banqueting halls?????

Just when you think you've heard it all! LOL

I remember seeing my first drone in Turkey about 4 years ago, and didn't have a clue what it was at the time - I have never seen another one.

This may be one of the coolest things I've ever heard. It's probably going to get expensive though. Drones aren't cheap.

OMG this is so epic! Hahahaha!

Mr. Sweet and I have been to several of these events and they are TONS of fun...we watched warriors on horses with long spears race toward ea other...fire eaters...court jesters....jugglers...as we were walking along, enjoying it all, a young man dressed in period clothing, ran up to me and breathlessly asked "my name is Jack...have you seen Jill ?" SO FUN

Wow! Well done, Sir Anachronism! This shows how vital our Ren Faire and SCA brethren are in today's world.

How cool is that? It must be a riot to see. Drones are a way of the future.

That's great! :) I hate those drones...technology is too much these days. It's going to be like the Terminator soon, the machines will start thinking and destroy all of us!

Haven't been to one in ages.

LOL! He has good aim!! Love the rock!

Now that is awesome! Someways I just love the human spirit!

Never a dull moment in your world! Now I'll be looking up more often! xDebi

That´s cool!!! And I really really wonder, how you do always find things like this!