No, not the city in Italy -- the sandwich meat!

Gawd, I ate a river of baloney (as we pronounced it) when I was a kid in Manitoba because, of course, baloney was at that time a cheap meat source for the poor. It's been a long time now since I've had to subsist on baloney, but I still get a craving for it maybe once a year. Once I've had some, though, I'm good to go without it again for at least another twelve months, LOL! 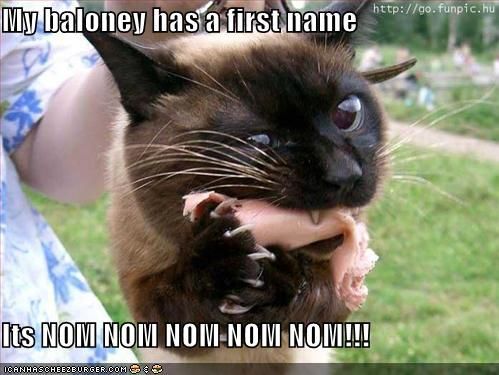 Baloney also occupies a special place in the traditional diet of folks from Newfoundland and Labrador, Canada's 10th province. Newfoundlanders are known for loving their baloney and this has become part of their stereotypical image. 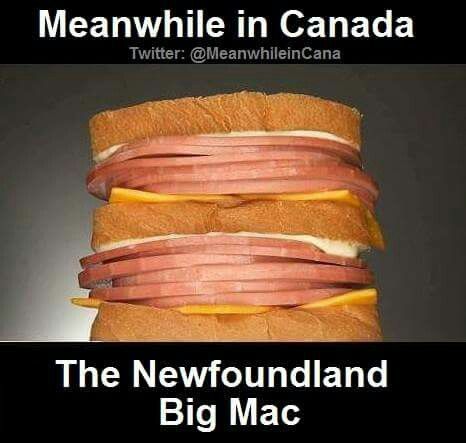 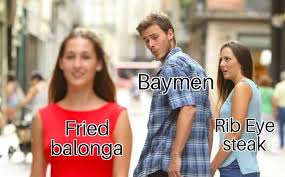 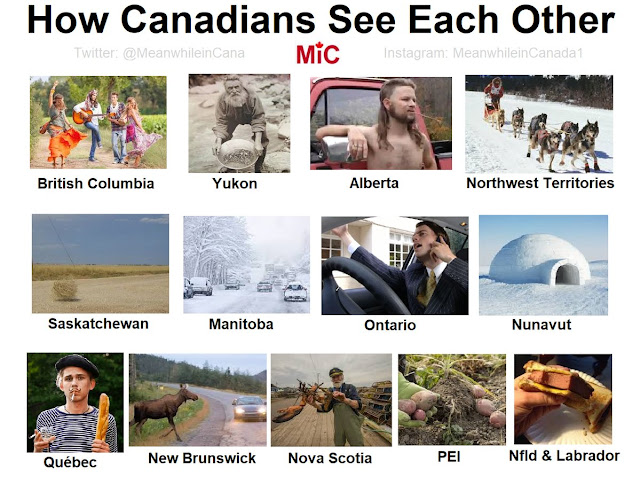 Lots of Newfoundlanders work in Alberta's oilfields. Many fly in and out, but some do permanently settle here. They are part of our cultural fabric in Alberta now. By way of example, My Rare One and I went out to breakfast last week here in Edmonton and right there on the menu was a listing for "eggs, hashbrowns, NEWFIE STEAK and toast."

So, of course, I had to order some. Behold my breakfast plate -- 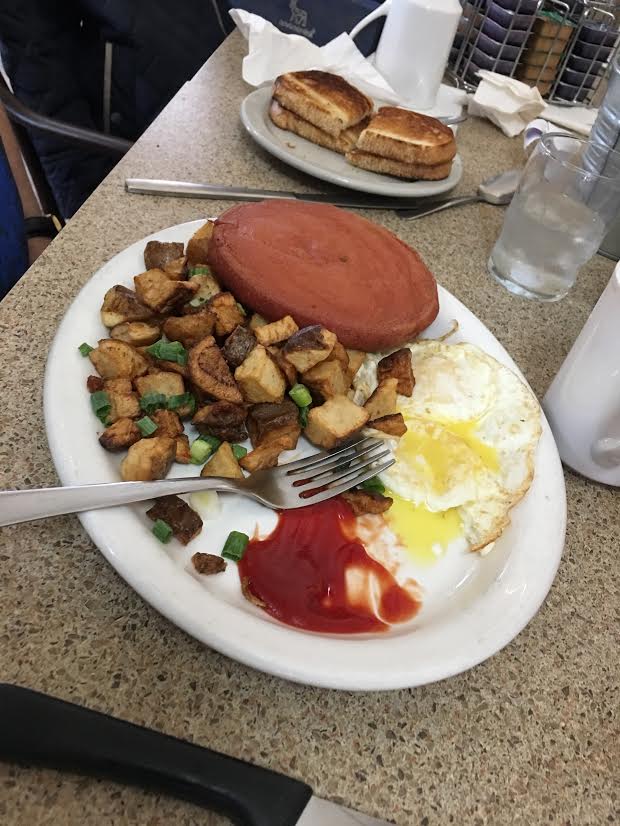 A big ol' slab of baloney cut right off the CHUB! That's pretty ritzy, man. WE only ever got a fried SLICE of it from the package. And while this baloney was warm, it was not fried to a delectable crisp like my Mom would have made it (with a little slit cut in the side so it wouldn't curl up in the pan). 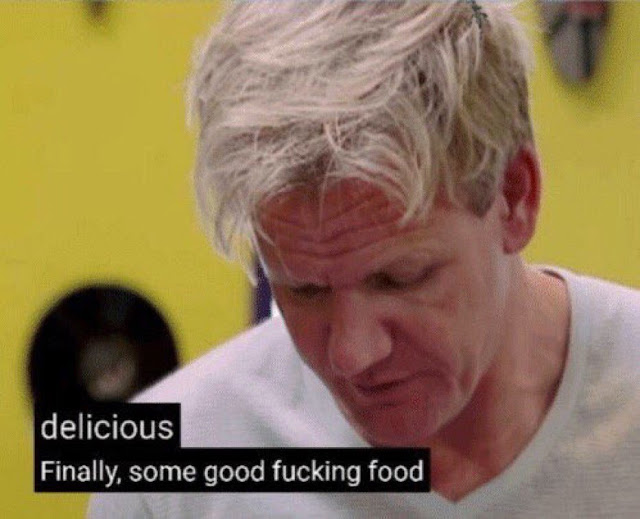 I grew up on boloney. Every Sun. for supper, we had fried boloney.

In my visit back to Illinois, restaurants served hot bologny on a hamburger bun with Miracle Whip.

When we got back, we bought some and relived those days. time to get more.

I enjoy your writing.

oh yes, Garry buys thick sliced and fries it, or get this,, he even puts it on the BBQ !! We grew up eating it, he still til this day loves it but eats it not too often,, its a killer,, he found a foot ball of the good stuff as he calls it,, Schneider's, it has to be that brand, unsliced,, a rare find and he brought it to our son inlaw who lives in Michigan, he loved it! But it isn't healthy, could be worse I suppose,,

I don't like bologna or baloney. never have, never will. LOVE the "how canadians see each other" though!

I’m with you for crispy bologna!

Sounds like a course meal for Daisy sometimes. At bologna is inexpensive, was easier to stomach that at the register than ribeye steak

Haven't had it in a long while, but a fried bologna sandwich was a go-to when I was a wee queerling.

That was the only "lunch meat" or "cold cut" we ever had for years growing up. The first picture of the cat made me LOL!

I love love love Baloney (any kind … wink … smiles) … in Europe they sell you Leberkaese, which is a big fat slab of hot Baloney with mustard and/ or curry ketchup served on a bun … so good … Excellent and entertaining post, friend D. Much love, cat.

fried baloney and eggs for dinner was the best thing that Dad would cook as a kid.

That balogna goes well with beans and rice just like good old Spam and hot dogs. We were poor growing up. Had one pair of shoes we got each year for back to school and rubber boots you pulled on over them for the winter. It was simplistic living.

My husband is a huge fan of fried beef bologna mixed in with eggs as an omelet. His dad made it for him, and he loves making it for the kids.

that and hot dogs are the only think I miss of meat as a vegetarian ;) My mom used to even bread and fry baloney :)

That is actually how I see the rest of Canada. 😂

I used to love baloney as a kid - especially fried baloney! However, now I see it as made from lips and assholes.

I had no idea Debs you were a size queen. Seems we both like big slabs of meat.

I love fried bologna sandwiches....with lots of mustard. So yummy.

I remember balogna sandwiches with mayo and mustard and maybe some cheese. I still crave on e once in a while. Never had it fried!

Thanks for the trip down memory lane!! My go-to snack growing up was a (non-fried) baloney sandwich ~ on white bread with mayo and some sweet pickle relish ~ YUM!!!
Thanks for the big smile!

Ugh. I'd have to deep fry it or mix it in with a stir fry or something. I can't stomach bologna otherwise.
Have a great week.

This was so funny. And that "How Canadians See Each Other " had me laughing out loud!

I can't stand the stuff, just the smell makes me feel ill. I was always suspicious of it because our dogs were outdoor animals that could eat anything and yet baloney made them sick, something didn't seem right about that.

Baloney, cheese, lettuce on white bread I with mustard and mayo were what I now call "road sandwiches," what my folks would make for us on vacation. I still crave them now and again when I'm on the road.

Those spuds are what I'd call home fries, hash browns are grated. Either way, I'd still eat the heck out of them.

@ brewella deville -- This restaurant wasn't upscale enough to call them "home fries," LOL! In Canada, you can get your hashbrowns "cubed" or "grated."

I can only eat it fried to a crisp (salami and corned beef also good that way), and once in a blue moon is sufficient. --Jim

Never heard of it before and could never cope with a slab of meat that size!!!

I’d like to say ”Baloney, bleach!” But I’d probably like it. I’ DID ea balogna sandwiches when I was a kid and Norway has something I love, cervalot, which s an awful lot like balogna.

I couldn't get past the runny fried egg on your plate to look at anything else. Excuse me while I rush to the loo. :D

the original bologna is from germany and called leberkase. translation: liver cheese. though it has neither in it. sometimes it is shredded and made into salads, sliced thick and mostly it is pan fried and served with fried onions. they also slice it thin and serve it with radishes and butter and pretzels. i love leberkase but am not a fan of american bologna because i think it lacks flavor. and guess what? you can make your own!

Not a fan of bologna. I ate it as a kid when mom would make sandwiches for school but haven't had it since. My husband loves to fry it every now and then for dinner while i'm out running errands or something. I can always smell it when I come thru the door after he's made it. LOL

Wow, talk about a trip down memory lane! We ate a lot of baloney back in the dark ages. It was the only lunch meat we knew of as children. And, for fancy times, we had braunschweiger. I haven't had a baloney sandwich in a long time, whether fried or cold. I don't know what I'd do with the rest of the package after I had one...

Excellent post, Debra!
(Love the 'How Canadians see each other' - sent it to my Edmontonian neighbor)

I grew up on peanut butter and jelly sandwiches but bologna was a treat. David and I love fried bologna with melted cheese sandwiches on Saturday for lunch. These are all great.

Oh this post brings back so many memories. From my mum as well slitting the side of the bologna to eating it with ketchup. But alas I refuse to eat it now. I just can't bring myself to eat any sort of "pink" meat. But my son still requests it every now and then. And I do buy it for him :)

Every now and then I get really hungry for a bologna, Hellmann's mayonnaise and super fresh bread sandwich. Thinking about that now.Yum.. I never have any bread in the house so it would have to be on an English muffin if and when I ever get a couple slices. It would be a nice change. Hope you're having a good week.

I just learned something new about my Newfie blood! My grandparents on my mom's side immigrated to the US. We grew up on bologna too and I thought it was just because we were less than rich. I loved me a cooked bologna and cheese sandwich back in the day.

Bologna was a childhood favorite. Now I just don't like it.

Damn, that was awesome! How we see Canadians in particular was hysterical and good point about people from the East impacting people there with food. I grew up eating it too. I would eat the meat on its own and then eat the mustard oozing bread. Yes, classy I know!

We were kind of poor growing up, and my mother made bologna sandwiches all the time. I think it spoiled my appetite for them.

Good post Debra! I love my baloney! Although, like you, I might have it once a year. Mom always gets it in the wax cover and then you slice it to the thickness you want. Like you, always a little slit cut on the side, so it won't curl up in the pan! LOL! That is so true on how Canadians see each other! LOL! Big Hugs!

Got introduced to fried balaney via my dad when he used to watch my brother and I on Saturdays whenever my mom had to work. Fried baloney was one of the very few meals I would eat that he had concoct4ed for us for lunch (why do parents think that their kids like the same weird stuff that they do is beyond me). Haven't had it but I sill enjoy the memory of it.

LOL I love this...I am also good once a year with a nice toasted bologna sandwich with lots of mustard....my son though wants it all the time. He gets it only once in awhile lol.

LOL - they serve that in the American south sometimes, too. :) I loved Anthony Bourdain's visit to Newfoundland. I have about 40 episodes DVRd right now and watched that one last week.

When we were growing up, we didn't realize that baloney was a cheap meat source for the poor. We just thought it was great for making fried baloney and mustard sandwiches which we thought were awesome. My mother slit the sides to keep the baloney from humping and curling too. When we lived in Newfoundland, we discovered Newfie steak ~ Yum! Thanks for the memories, Debra!