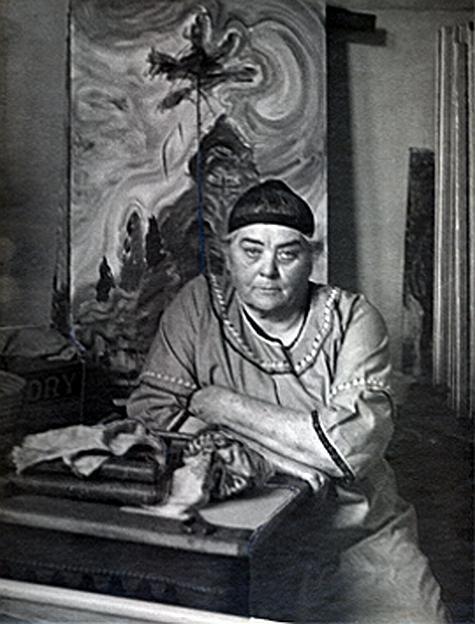 Emily Carr (1871-1945) is one of my favourite Canadian artists. From her home in British Columbia, she struggled to achieve her artistic vision despite obscurity, poverty and eccentricity. As Wikipedia notes, her art was:

. . . inspired by the Indigenous peoples of the Pacific Northwest Coast. One of the first painters in Canada to adopt a Modernist and Post-Impressionist painting style, Carr did not receive widespread recognition for her work until the subject matter of her painting shifted from aboriginal themes to landscapes—forest scenes in particular.

This next image is of my favourite Emily Carr painting. Deeply spiritual in meaning, the painting depicts three trees, sole survivors of a brutal forest clearcutting operation. These trees are meant to remind us of the three crosses of Golgotha, where Christ and the two thieves were crucified. This time, however, the unspeakable crime is committed against Nature and Mother Earth. The clouds filling the sky, suffused with light streaming from heaven, ties into this spiritual theme as well. Carr's use of light in this painting was influenced by the style of her friend and early artistic/spiritual mentor, Lawren Harris of the Group of Seven (another favourite Canadian artist of mine). 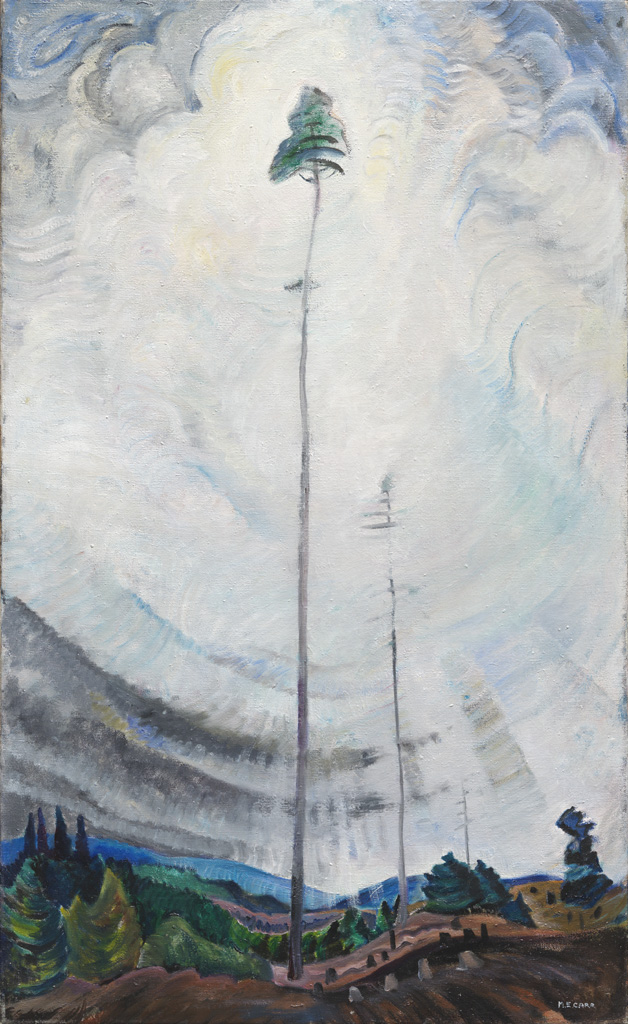 Carr entitled this painting: Scorned as Timber, Beloved of the Sky.

An exquisitely poetic title, isn't it! It's essentially a modern, free-form haiku, written long before such zen poetry came to North America.

I love the title as much as the painting. In seven little words, it perfectly expresses that the true value of Nature is never to be measured or judged by its commercial or economic worth.

When we were in Vancouver earlier this month, we spent some time at the Vancouver Art Gallery. Guess what it had on display! 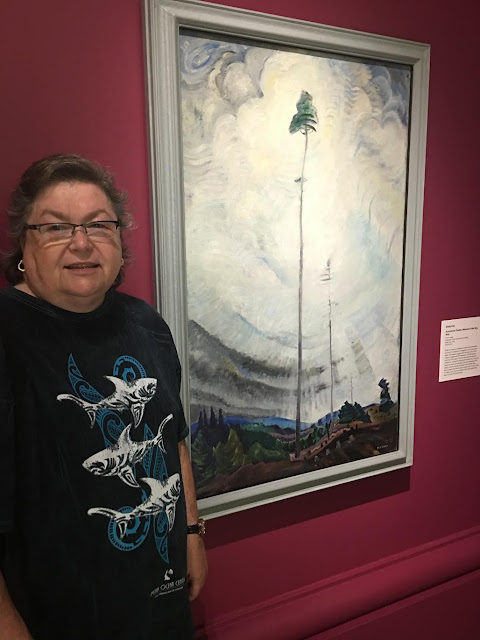 Each time I've seen it has been a wonderful gift.

Her painting reminds me of the book "Big Lonely Doug". I like her paintings. Thanks for the post

Wow! it's a beautiful painting. She was way before her time environmentally speaking, wasn't she?

It's such a sad painting, especially in like of what's happening in the Amazon right now.

Emily Carr is one of Canada's finest. I wonder if you have ever had the opportunity to visit the McMichael Gallery in Kleinburg, ON where there is an impressive collection of the Group of Seven. It really is terrific and oh so Canadian. My wife and I have made several visits, the last time when there was a Robert Bateman exhibit.

She look so fun in that first portrait, but I think she needs a scowling cat sitting next to her!

@ David M. Gascoigne -- Yes, we went to the McMichael Gallery a few years ago and absolutely loved it. The Robert Bateman exhibit was on when we were there, so it must have been the same year you visited!

I remember two treks I did to see van Gogh’s Starry Night. Standing before it finally was like a dream.

I like that title, too. She may have been as good a writer as she was a painter.

Looks a little bit like the tree my daughter and I planted when she was a young kid. It was a scrawny 6 inch evergreen plant when we planted it then grew into a very large tree. One side of it has no leaves.

I first came across Emily Carr when I was in Canada visiting the Ontario Art Gallery and also the McMichael Gallery to see the works of the Group of Seven. I do recall that she was greatly inspired by the Indigenous peoples of the Pacific Northwest Coast.
I would be hard pressed to pick a favourite but I particularly admire her paintings of Canadian Forests and Woods especially one called Autumn Woods.

I never heard of her, but that is an outstanding painting, really beautiful! I'm glad it's in a museum, and not the private collection of some fat cat.

This painting is perfect for now… one tree doing the best it can.

I love how she rendered the sky. The painting is captivating. How wonderful you've been able to visit her piece a few times already.

I spent my Freshman and Sophmore years at a High School in Toronto so I learned about the group of seven in art class. I however, don't recall the name of Emily Carr although we probably studied her. I really liked their work.

thank you for bringing ms. clark to my attention. you look fabu next to the painting!

Another incredibly talented Canadian painter. What a great blog post! Thanks for sharing this:)

What a wonderful gift indeed! A beautiful painting, with such great meaning! She was an amazing artist!!! Big Hugs Deb! (I can't believe Harry is gone!! Still crying!!)

And look at your shirt! I am currently reading What a Fish Knows by Johnathon Balcombe. We're all in this together, you know. Just one big pot.

Hello Debra, Emily Carr is now a favorite of mine, also. Scorned as Timber, Beloved of the Sky has a powerful impact on many levels.
--Jim

I wish I could appreciate art but I don't have that part of the brain .

never heard of her..duh..but boy do I like the 2 paintings here.

When I went to the national gallery of art, it was really neat to know a lot all their art were the originals.

What a thrill it must be to see a painting that speaks profoundly to you, Debra. I know of Emily Carr, but I have not seen many of her paintings. This is magnificent!!! Kudos to your Rare One for a great photo! The expression on your face is as compelling as the painting: a quiet joy and peace in the presence of greatness. I have to admit that I didn't think of the three crosses of Golgotha. I thought of the Lorax who said "I am the Lorax. I speak for the trees ..." I would always read this Dr. Seuss book to my kiddos in school. I had to google Lawren Harris because he didn't come to mind when I thought of the Group of Seven. I am blown away by his paintings. I am powerfully connected to landscape, and his paintings capture the essence of the northern landscapes I love so much. I might have to order a print of his! Thanks for this wonderful post. btw ~ I have my "Luck" stone nearby. I love to rub it in my left hand with my fingers, and I have been in a good place lately, even if it's been crazy! Lucky Louise!

It’s such a fantastic experience to see in person a work of art that has deep meaning to us!
I have never heard of her, but now I’m going to see if there’s any of her paintings in the Art Institute. Who knows? Maybe that will motivate you to come to Chicago!

That is a powerful painting, Debra. It resonates deeply with me right now. Our area is be pillaged even my youngest child is tired of it. So many trees have been removed so buildings can be erected and then the companies close down. Rather than find new businesses to move in, they build new locations. It's beyond frustrating to see the woods vanish, wildlife lose their homes, and the flooding increase. It has to stop.

I recall this painting from Forest to the Sea - a fascinating exhibition of Carr's work as it reflected British Columbia. It is as sadly relevant today as it was the day she painted it.

This painting was in my dream last night!!! I had to tell you that Deb!

I love Canadian art and artists! My sister is an artist and it's taken me years to appreciate her gift for expression, but I so get it now. This pice by Emily Carr is so beautiful and I can feel what she's saying through it. Wow! Very cool

I'm not familiar with Emily Carr's work, friend D … but very familiar with the statue in front of the rose garden by the Empress Hotel in Vic. There she stands with dat lil dog and dat cheeky lil monkey :) Much love, cat. PS: U looking good in the picture :)

My favorite Canadian artist, by a long shot. I love this painting. I love the title. Her work is so visceral for me. I'm so glad that you got to see it again first hand.
Thank you for the post! Supremely awesome!

her art is mighty and speak for her intellect and insight dear Debra !

i loved her approach towards life and nature ,striking and practical

glad you had the favorite painting of your favorite artist which is quite big deal because it does not happen to all :)

i liked fish on your shirt :)

I'm not really familiar with any Canadian artists or contemporary artists. I'm going to widen my horizons and do a little research. Thanks for the heads up. This should be interesting.

Interesting painting..especially the ratio of tree to sky..I can understand why you like it.

I think we went to the Vancouver Art Gallery. I cannot remember much of it, except one painting of Epiphany with a baby Jesus who looked like an ugly wrinkled gnome.

Hello, Debra - Longtime reader of your blog / first time commentor. I appreciate you and your posts. Your blog is one of the things that helps me get by. When I visit your blog, I feel like I am hearing the Carole King song: "You've got a friend" in the background. I am venturing to comment today due to the artwork of Emily Carr. I had never heard of her before (and I have a Fine Arts degree). I am profoundly moved by her paintings. When I look at her paintings I feel a portal is being opened and I am being contacted by a long lost soul-mate. In addition to the movement she created with her paint, I am touched by the images she chose. I recently read this in a Ngaio Marsh novel: "We deprive ourselves aesthetically when we forgo the advantages of symbolism."
Thanks so much for sharing this and for all the other things you share, Debra!

@ AMWin505 -- Thank you for introducing yourself via your first comment! And I appreciate your kind words!

There are a couple of local (to me) artists I really love. One is Joe Scarborough, he lived on a canal boat in the city centre and generally paints local scenes, we have a print of his above our fireplace.