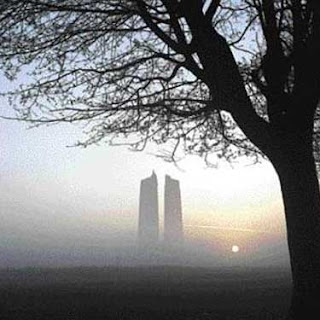 Charlie Walker was born in Scotland in 1891 and emigrated to Canada as a child. He may have come to our country as a Barnardo's Boy or as one of the Home Children who were shipped overseas from Britain to be domestic help and farm labourers. As an adult, he ended up in southwestern Manitoba and worked as a farm labourer for my grandfather. He was very close with my grandparents and I believe he worked for them for several years. In the winter of 1916, Charlie Walker volunteered for the Canadian Overseas Expeditionary Force. After training, he was sent to France with the 44th Battalion of the Canadian Infantry (Manitoba Regiment). He was mortally wounded at Vimy Ridge in April, 1917 and died about a month later on May 8, 1917. He was 26 years old, unmarried, with no children. Charlie Walker is buried at Vimy Ridge in France.
Posted by Debra She Who Seeks at 14:19

I am really sorry that I did not notice such beautiful things about Canada.It is always fascinating to know about such inspirational incidents of the past. I have none. I love histories a lot.

Have you ever had a chance to visit his grave in France?

No, unfortunately I have not. But I would love to do so some day.