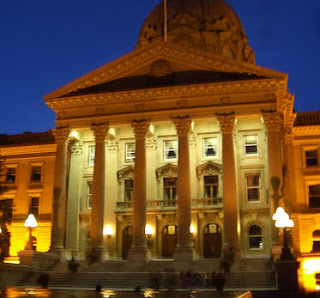 My Rare One and I got up in the middle of the night and drove to the Alberta Legislature. We stood in the cold night air and the dark by ourselves and then we went home again. Here's why.

There's a special transatlantic Vigil of Remembrance being held this year for the 68,000 Canadian soldiers killed in World War I. At some point during a night from sunset November 4th to sunrise November 11th, the name of a fallen soldier will be projected in light for a couple of minutes against various public buildings and monuments in Britain and Canada. The illuminated names start in London, England (projected onto Canada House in Trafalgar Square), then cross the Atlantic and are sequentially illuminated in Halifax, Fredericton, Ottawa (projected onto the National War Memorial), Toronto, Regina and finally Edmonton (projected onto a large screen in front of the Alberta Legislature). The westward progression of the names is meant to be a symbolic repatriation to Canada of those who died and were buried in Europe as a sacrifice to the British Empire.

There is only one soldier from the First World War to whom I have a personal connection. His name was Charles Hengham Walker and his name was illuminated this morning at the Alberta Legislature at 2:33 a.m. We were there to witness his symbolic homecoming. To greet his return, I wore the ring he wore throughout the war, including at Vimy Ridge where he was mortally wounded and subsequently died on May 8, 1917.

More about Charlie Walker and his ring in the next couple of posts.
Posted by Debra She Who Seeks at 12:06

~wow...i did now know of such an event...what a beautiful way to honor and remember those who have passed...i am glad you embraced that moment and i am sure your loved one was with you that night with a bright smile upon his face...may you carry that ring close to your heart always~