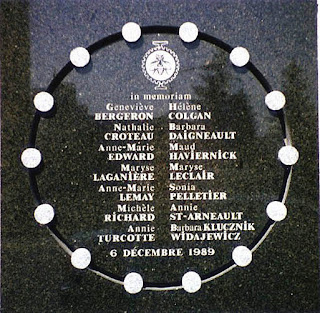 It's hard to believe that 19 years have passed since December 6, 1989 when 14 young women were murdered at L'Ecole Polytechnique de Montreal by a crazed misogynist gunman. At the time, absolutely everyone knew the gunman's name because of its constant repetition in media reports. But the women's names were rarely mentioned or highlighted. So the women who organized memorial rallies in virtually every city across Canada made a point of reading aloud and emphasizing the women's names, so they would not be twice victimized by being anonymous characters in their own horrific story. It is the gunman's name which is not mentioned at the continuing annual memorials, so that he is denied any personal recognition -- even the notoriety of infamy -- for his evil hate crime.
Posted by Debra She Who Seeks at 12:47

Labels: I Am Woman Hear Me Roar, O Canada