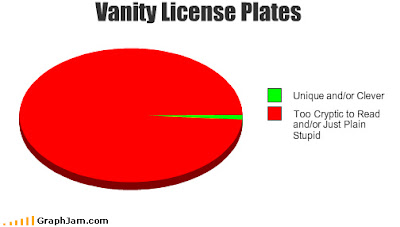 Last week, Brahm at alfred lives here had a funny post about vanity plates, including a link to photos of some "best" and "worst" ones. His post reminded me of an infamous license plate that was issued in Winnipeg about 30 years ago when I was in university, so I thought I would share that story today.
Here in Canada, all license plates (regular and vanity) are pre-screened by the province to ensure that they do not contain swear words, sexual imagery, discriminatory insults or prejudicial slurs. But one such license plate slipped by Manitoba officials. And it wasn't even a vanity plate -- it was just a regular alphanumeric licence plate. It read: 69 AAH
Everyone heard of and laughed about that plate. I thought it was just an urban legend until one day when I actually saw it for myself! The plate was on a car driven by an older, sweet-looking, white-haired couple who probably had no idea of their license plate's double entendre. Or maybe they knew exactly what it meant and thought it was hilarious!
Never underestimate the elderly.
Posted by Debra She Who Seeks at 05:31

~that is too funny! i think they knew for sure...some of the things that come out of the mouth of my grandfather...dirty.dirty.dirty!!! far worse than young'ins at times!!! warm wishes and brightest blessings~

Old people have filthy minds, too. Remind me to introduce you to my parents...

That is too funny! I love decipherer vanity plates!

Oh, I needed this to make me chuckle today, Debra, feeling horrible today and reading this felt good. :)

Okay, now I know what license plate I want when I'm 80.

too funny !!!! happy to see you today, my friend

hehe... they probably knew exactly what it is ;-)

Would you believe, I can top that? A couple of years ago in fair Cowtown, driving to work behind...

How _that_ one slipped through, I'll never know, but we laughed ourselves silly. Where's the camera when you need it?!

oh the shame of it....loved the lil cat video! Sweet...Thanks for your visit and comment...

Oh, that's funny!!! If you asked them about it, they would probably play innocent, or be aghast, but then would cast sly looks at each other. .not the image one usually conjures up when thinking of their Grammy & Gramps! lol

Good for the elders! We're all headed that way, so we might as well sit (lie??) back and enjoy the ride ...

I was coming out of a local lesbian bar years ago (now sadly closed) with Wordweaving and our best friend FiberGeek. We saw a vanity plate composed of the old binary computer code - which I could not reproduce here if my life depended on it. However, FiberGeek is indeed a computer geek extraodinaire and she can READ binary like I read the daily news. So I asked her, what does that say...you can see this coming,can't you...
She looked, and cracked up, then translated.
69, of course.