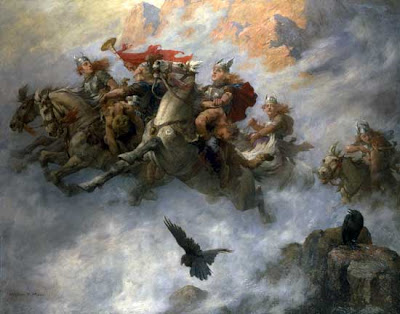 Now, I'm not a proponent of warfare, battles, death and misery but, having said that, I've always had a certain fascination with Valkyries, the "Choosers of the Slain." Accompanied by ravens and riding their fierce horses through the sky, these Nordic Warrior Goddesses carry fallen heroes and warriors from the battlefield to Valhalla, the home of the Gods. 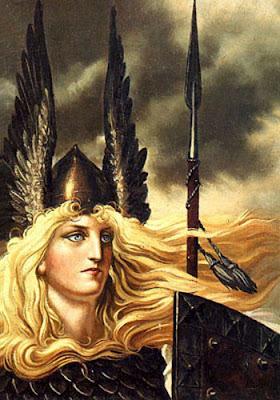 Valkyries are tough, no-nonsense Goddesses. And they are given suitable names to prove it, names that reflect and celebrate conflict. For example, Brynhildr, the name of the head Valkyrie, means Bright Battle. Her sisters have names like War, Tumult, Chaos, Devastation and Clash. And then there are Sword-time, Spear-flinger, War Axe, Victory Rune, Cruelty and Killer. Not to mention Battle Spear, Battle Cry, Battle Noise and War Oath. Even the softer sounding Ale Rune is a reference to drunken brawling. 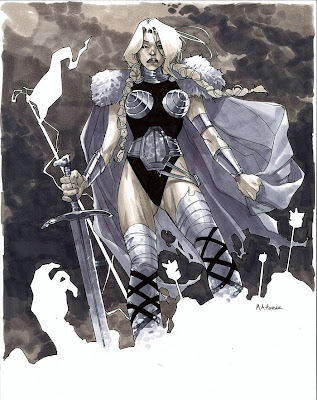 But there's one Valkyrie who resonates with me above all others -- Bossy. Yes indeed -- Bossy the Valkyrie. She doesn't sound quite up to the same belligerence level as her sisters but still, I bet she can seriously get on someone's nerves which might cause conflict to break out. 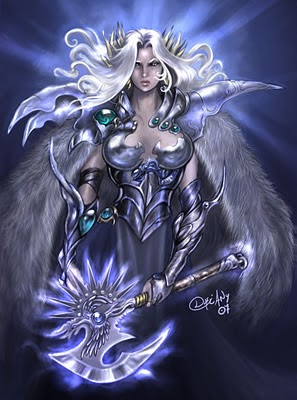 Hey, don't get me wrong. I do not have a soft spot for Bossy because she is in any way like me.

[My Rare One and Her Royal Highness both vehemently shake their heads: Nooooooo, no resemblance there!]

Bossy the Valkyrie sounds well-meaning, really, and gosh, can she help it if she just knows better than everyone else?

[And now my Rare One and HRH commence exaggerated rolling of eyes.]

It would save so much time if everyone just listened to her! And did things her way which is the correct way, after all.

Last one reminds me a tad bit of brass boobs..um I mean Wonder woman!! :o)

Re: Bossy, I think we should just do as we're told. If Mama's not happy, ain't nobody happy.

Ooooh that Valkyrie is beautiful. And tee hee I like that you're The Bossy.

Did not know that much about The Valkyries..... what a shame Women's Professional Wrestling wasn't around, they probably would've been pretty good!

Why do I hear Wagner's music playing in the background when I read your post, Debra? ;) There's a great book about Odin, Sigfrid and Brynhilda in a book series called "The Wolf and the Raven" I think that's the first one. It's funny that I have Norse ancestry and yet I'm not drawn to any of the mythology or pantheon. You need to talk to Lyn over on Witch Blog as she just had a dream about Odin. It's strange that I keep reading about blogger's connecting with Scandinavian Mythology. And I like "Bossy" the Valkyrie ;) I can imagine Your Royal Highness dressed as one too ;)

Are you making that up? You'd better not be, or I'll be grumpy.

I love the idea of Bossy the Valkyrie! That's me!!!!!! That's me!! And believe me, no one around here, would deny it like your loved ones do. No one!

Ahemmm, you'd better not be kidding me. -pout- -grump- -sigh-

I assure you, Aunt Amelia, Bossy the Valkyrie is completely legit! I learned about her in this book which I'm currently reading: Jonathan Clements, A Brief History of the Vikings: The Last Pagans or the First Modern Europeans? (2005).

I love the idea of Bossy the Valkyrie. It makes me believe there is balance in the universe.

reading this - I think the Valkyrie Goddesses have some imput into my life.. not in a good way either.. [not sure if I like them much]..Chaos, Tumult and Clash..

as you know my Goddess is Freya the Goddess of Beauty Love, Destiny and War..she seems to think you'd make a Great Bossy ...

I want to be a Valkyrie when I grow up. I have a pet Raven, well almost.

My male cockateil is named Odin, but Freyja, his mate passed away.

I love your story here and pics. Thx.