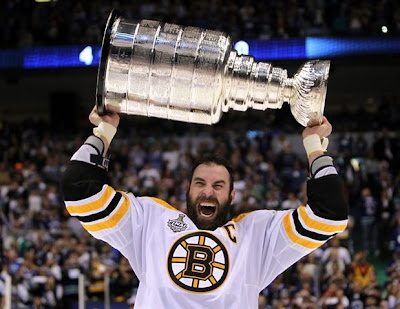 Say it ain't so, Sedin twins! My heart is broken, Luongo! *SOB* Mauled by the Bruins -- MAULED!
The Bruins' goalie Tim Thomas is a friggin' BRICK WALL! My gawd, it's next to impossible to get anything past him. He certainly deserved to win the Conn Smythe trophy as MVP.
Next year, Lord Stanley's Cup, you'll return home to us here in Canada. Next year. I know it. 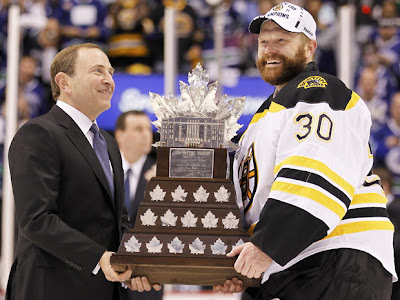 [Photo of Zdeno Chara with the Stanley Cup by Jonathan Hayward, The Canadian Press. Photo of Tim Thomas with the Conn Smythe trophy by Mike Blake, Reuters]
Posted by Debra She Who Seeks at 05:30

So sad! But not as sad as the rioting. Come on--that just makes us look like a bunch of goons!

So sorry for your loss...Pompous Bruins on U.S. TV...and the rioting...sounds like MSU a few years back...

Sorry for the riots! I do not follow the Stanley Cup but maybe next year for you.

I don't follow hockey, but I would have liked a Canadian team to win. That being said, I'm shocked by the riots out west. It's a game, people, a game. Talk about fans behaving badly. Very shameful.

I immediately thought of you. .sorry that your Olympics/Stanley Cup Theory didn't hold true.

But the saddest part is the rioting. .it seems that it doesn't matter if a team wins or loses, some "fans" just can't keep it civil. I don't understand that mindset.

Years ago, I'm sitting with a guy, on our first date, at a hockey game, wearing a new sweater, when a guy behind us gets into a shouting match with a guy in front of us, and before we could move, it advanced to them throwing their respective cups of beer and wine at each other. .well, you guessed it. .I was the unhappy recipient of a blended shower of hops and grape. The confrontation quickly escalated into reaching, grabbing, and fist swinging. .fortunately, I got out of the way, with bodies falling over seats. .security got there and hauled them both away, along with an assortment of "friends" that had joined into the fray. Not one person apologized to me, offered to pay for my sweater, or even handed me a towel! I had to go back out into the freezing night air, hair drenched, clothes soaked, and smelling like a biker's bar that had seen better days. Kind of tainted my love of going to hockey matches, and definitely established my disgust of "fans" who have to let their emotions, along with their fists, fly.

There is always next year. . they can start a new trend. Two years after the Olympics are hosted. . . lol

Yes the game was heart breaking but a friend from Vancouver posted a poignant comment this morning on fb about the fact that Vancouverites are rioting about a hockey game and not the appauling unemployment or living situation of the First Nations people etc. Makes you wonder about things, eh?

it was a shocking game with a shocking ending,, I think Francie has a point,

yup, it was disappointing at best...devastating for many....but the rioting was disgusting....it's a game ...and it's supposed to be fun....turned me right off....

Too bad that the story of this years Stanley Cup has turned into the story about the riots. I think I'll go back into my summer hibernation!

I hear ya Debra.
We were watching last evening and could not believe the game. The other thing I still cannot grasp is how a player (from a previous game) can get his back broken in a check and no penalty, but then Gary *Buttman* being in charge of the NHL sort of sets the tone.....
With DH being from Detroit, riots after ANY game were so common; the Tigers win? RIOT! The Tigers LOSE? RIOT!
I think there is some sort of odd recessive gene that kicks into gear and sadly, shows people at their worst.
I'm moping today.....waiting for the next NHL season......how many days???

I don't follow the Stanley Cup, but I am sorry about the loss...and the rioting. Sports is supposed to be about fun. Somewhere along the years we forgot that.
Mary

Bummer...I guess that means Canada's going to invade now huh? Oh well at least I say eh with the best of them. I'll blend right in with our mapley overlords.

I don't watch much (ok, nil to none!) hockey. Pretty disgusted by the pics I saw this morning of all the rioting - how neanderthal!

while I was cheering the Bruins on I was feeling sad for you and all my canaderian friends..you and Leo the most as I know you really really care..sorry..!..sigh*..and who knew canaderians could be such assholes, burning and looting..I feel like we're a bad example for you guys.

anyone smell 'fix' in the final game?

Ah, damn D...does this mean we can't be friends any more?

Don't feel too bad, I've seen some bad boy behavior at U.S. football games, as well. Usually, and I'm not saying this is the case here, it involves copious amounts of libation.

Wait, did someone say something about a Canandian invasion? All right...bring it on...I'm tired of this shit anyway.

if I remember correctly one of those players is from Serbia :)

we watched too, the bruins did outplay them for sure. I think it was very sad about the rioting.