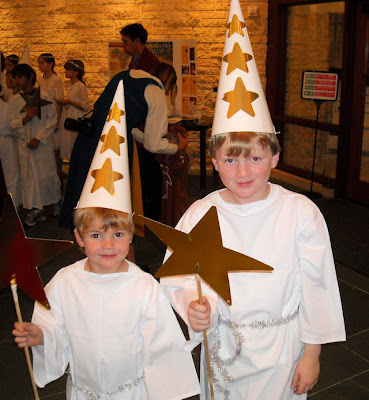 Today is the feast day of Sankta Lucia (St. Lucy), the very superficially Christianized version of the Nordic Goddess of the Winter Solstice, She who brings the returning light after the longest night.

Last year I wrote about the girls called Maidens who accompany Sankta Lucia in the traditional Scandinavian Lucia pageants held on this day. This year I want to focus on the boys who also participate in the ceremony.

Sankta Lucia's male attendants are called Star Boys. Dressed in winter white like the girls, Star Boys wear tall conical hats sprinkled with stars and usually also carry a star on a stick. Star Boys walk in the procession and sing the praises of the Solstice Goddess. Their stars reflect a bit of Her sacred light during the night of long darkness and act as a promise of the greater light to come. 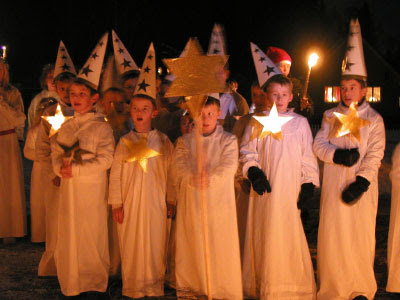 [Photos found on the internet]

very interesing!! now im going to have to call up my friend "google" and read more about this! :)

cute kids, although I must admit anything connected with religion freaks me out.

Awww they are darling! Always learn new things here!I agree who can resist pointy hats and starts!! How are ya hon?? Hugs, Sarah

Promise of the greater light to come...this is hopeful. Nice

The farher north you live the greater the importance of this Goddess I think. When I lived north of 60 it felt as if we were entering a long dark tunnel in Nov. and the winter solstice was an important yearly event. I would imagine in Edmonton it must seem the same. Lovely post!

They are too cute.
Mary

Those boys are *impossibly* adorable! So cute!

Although the kids are cute and are wearing spiritual attire, I'm afraid to say that they kinda look like future Klu Klux Klan members!

What cuties! I love hearing about traditions from around the world.

They look so darn cute.

This sounds great. And those boys are precious!

when i was [much] younger, still living in finland and sweden, my family followed this trad... i miss it... and my family! :(

"...a promise of the greater light to come." Love that! Sounds like a wonderful tradition. Very sweet boys.

Awesome! I dunno much about that holiday, but if it involves cookies, count me in!

Love these pictures! I have to get my mother to pull out our childhood albums. I know she has a picture of my brother and I taking part in this one year. I don't remember the star hats - you'd think that would stand out. I guess I was more fixated on the girl with the crown of candles on her head!