Hey, are you old enough to remember the iconic CBC children's adventure series, The Forest Rangers, which ran from 1963-65? What Canadian kid of that era could ever forget its jaunty opening theme music?

The series had a simple formula (as recapped on the show's fan website):
The Junior Forest Rangers live in a "Never-never land, unmarred by schools or parents, in which the only rules are the rules of conservation." Though the kids always manage to get involved in trouble, there is little violence involved, mainly just threats from wayward adults who put themselves in danger because they didn't heed the advice of the Chief Ranger. In the end, the wrong-doers are usually brought back to the Chief Ranger's (Department of Lands and Forests) office and scolded, but are rarely handed over to the law.
I remember watching this show avidly, cringe-worthy though I'm sure it would seem today. Some things are best left to the rose-coloured memories of childhood, LOL! 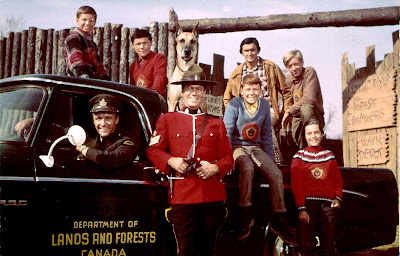 And yes, that's Gordon Pinsent as the RCMP officer. The Forest Rangers was his first role in a major TV series.
Posted by Debra She Who Seeks at 05:30

Not being Canadian, I don't remember it. But, I am sure I would have liked it as a kid.

An aside: I have a penchant for misreading signs. At first I thought the sign "fishing parties" was "fishing panties"...what the, I sez to myself. Even as a kid, I could have definitely gotten into that .

I remember it!!! Although in reruns, and sporadic, I loved that show.

I don't but my husband does, I love your description though, we need more never never lands.

never worked with gordon, but did with his daughter, leah, on 'made in canada', the rick mercer production

did not notice this program...

Seeing as I was only two when the series ended, I obviously didn't watch when it originally played - but I must have seen reruns of it, as it feels VERY familiar to me, especially the theme music... Did stations do the rerun thing years ago?

I'm not Canadian plus I'm too young to know of this show.

Hey everybody has their cheesy growing up show.... that typically is overly nice and everyone kinds learns a lesson at the end of each episode..... mine was probably Saved by the Bell...

I was just arriving into the world when the series ended, so I obviously wasn't a regular viewer! But I do remember it. Perhaps there were reruns at some point? I dunno...but there's something familiar about it in the back of my overloaded mind.

DH and I watched this in repeats on CBC. I think, when he was growing up in Detroit, they got it on the station out of Windsor.
Yep, it sure represents an era of TV not seen again.
But it has quaint charm for that!

Unfortunately, I never had the chance to watch this show.... I miss the shows of days gone by - when Life was simpler.....

We loved this show!! We never saw the original, but in reruns during the mid to late 70s. We'd get off the school bus and race to the house to watch, and then we'd play Forest Rangers and fight over who we each got to be. We all wanted to be the dark haired guy (who later appeared in Home Hardward commercials)

Thanks for the memories!!

Not familiar with it, since I'm not Canadian, it must have been exclusive to my neighbors to the north!

Never heard of it, but that looks hilarious!

never heard of it..but then I'm not candaderian.

This is way before my time. :P

I so remember this one. It was populated by a weird bunch right out of Canadian central casting. I don't think I could watch it today to tell you the truth.

Clean as a whistle! I do not remember this one...I was probably too old for this....or at least thought I was!
Things certainly changed later in the 60's when the Beatles hit the scene.