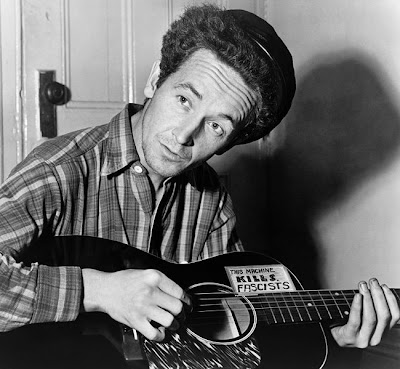 The great American folk singer/songwriter Woody Guthrie was born 100 years ago today. His labour, protest and folk songs have enriched us all since the 1930s. His most famous song is This Land is Your Land, a stirring anthem celebrating the rights of the working people who built America. Guthrie wrote it in 1940 as a response to Irving Berlin's song God Bless America, which he regarded as complacent patriotic schmaltz.

I think the most fitting tribute to Woody Guthrie is to post this wonderful video of This Land is Your Land, sung by Bruce Springsteen, Pete Seeger (Guthrie's long-lived contemporary) and Seeger's grandson, Tao Rodriguez-Seeger, in front of the Lincoln Memorial at Barack Obama's Inauguration Concert in January, 2009. The singers gleefully belt out all of Guthrie's verses, including his more radical ones which are often censored and omitted from public performances of this song.

How relevant this song remains today! Woody Guthrie would be appalled by the current state of America's economy and politics, I'm sure.

One of my all time favorites.
Mary

never heard of him, but he seems like a feisty fella

Now that was great! What a way to start my day...coffee and Woody Guthrie!!!

Definitely one of the greatest songs ever created. I've never seen this version of it; a terrific one, indeed.

co-inkydink? a day or two ago i posted stuff on seeger, both guthries [woody and arlo], and the weavers, including your video, on my fakebook... uh, facebook, page...

btw, the tall drink of water on pete's right, w/the 12-string, is his son!

Yes indeed he would be appalled. Love this post!

I love all the hopeful American faces in the crowd. Seems a bit sad to see them now.
I hope the song "This Land Is Your Land" has not inspired the people in my neighborhood who like to dump used oil upon the ground. Any song can be twisted for one's own purpose.

Love woody and Arlo!! Something about Pete Seeger. When he yelled at Dylan to unplug at Newport... Pissed me off... One minute talking about freedom and the next minute censoring someone else ....but I digress.

Woody Guthrie, would there were more like him today. and God, how I hate that God bless america song, it is so sappy. They keep playing it at the 7th inning stretch of MLB games. Really annoying. Go Guthries!

Great version of this song!

There's an excellent Canadian-ized version of this song. Actually, I've never given it much thought before and had assumed it was a Canadian folk song!

Well I'm appalled, too! Music and art as protest is something that will never die, fortunately.

The song gave me chills... my heart tightened a little... almost as tight as my fist... Woody's songs have always put things in my head.

Oh Debra! This is what I LOVE about you! You are a hippie at heart! This song could easily replace the anthems in both countries....in fact throughout the entire world! We are losing control of what is 'ours' so quickly under the guise of 'world economics' which only means the greed of the rich.

The best of our neighbours to the south! Under all of the turmoil and tribulation of the present times, that spirit lives on in the American music and people.

i loved woody guthrie! and his son!

I'll take this any day over Irving Berlin's saccharine. Love it.

wow, never heard of him before, but I love folk music.

I can't believe it's been that long. Thinking about Guthrie makes me think about Dylan. Two great American musicians.

I've heard the name but never actually heard any of his music. But as a big fan of folk music, I think I'll be spending some time on Youtube today listening to his music.

Wonderful post! I love this song so much! Did a post last year with his original version from youtube. The song really touches my heart and speaks for All of us! Why have we slipped so far back? Woody we need you or someone like you...

Oh, man! I missed Woody Guthrie's birthday. How is his birthday not a national holiday?

Good Gawd! This Land is Your Land. This takes me back to when I was a wee one in school, back to first grade at least!

I love that song and I've heard some good versions over the years, but am I the only one has an issue with a multi-millionaire singer, who is somewhat out of touch with the issues that effect people such as myself, performing this song?