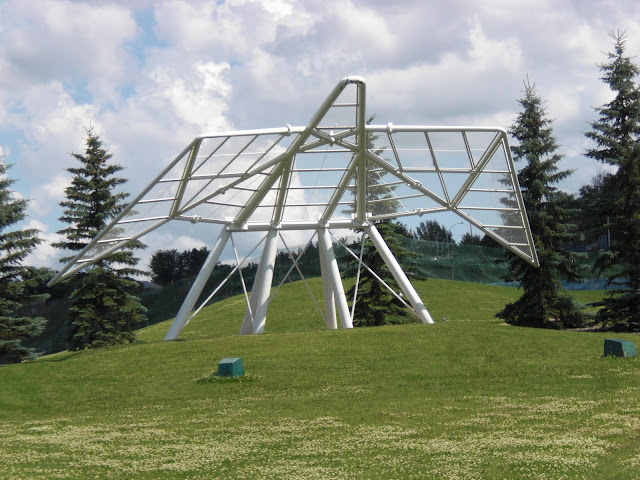 Interpretation: The Judgment card indicates a time of great healing in the person's life. Some old internalized limitation has finally been overcome, such as guilt, self-hate, narrow-mindedness, etc. The person has been released from some negative aspect that was blocking a fulfilled life.

Image: Built of steel, this huge white stylized Dove of Peace sculpture was erected to serve as the backdrop for an outdoor mass conducted by Pope John Paul II during his visit to Edmonton in 1984. It was afterwards left standing on its river valley hillside as a commemoration of the event. Edmontonians call it "the Papal Pigeon."

[Photo by Debra She Who Seeks]

I really am enjoying your tarot series ... learning something about a lot of things! :D

Great representation! Though when I first saw the photo, I did not think it was a dove but an eagle.

I thought it was a line for drying laundry LOL

LOVE LOVE LOVE this Debra. Thank you so much for sharing this. I reached this point in my life last summer. It was so freeing. It makes me want to pull out my old deck of tarot cards and flip through them to see if I can find this card.

This was a good one. Amazing sculpture. Have a wonderful weekend.
Mary

"The person has been released from some negative aspect that was blocking a fulfilled life." That would be the divorce from my ex...FREE AT LAST...LOL...

I also thought it was an eagle. With the sharp angular lines doesn't seem like a soft peaceful dove. But, "Papal Pigeon" haha! I never thought of the Judgement card as being a time of healing, but I see it now thanks to your explanation. Thanks Debra!

The Papal Pidgeon made me laugh out loud!

This week I have felt released from a negative aspect that was blocking a fulfilled life...guilt over my Dad in an assisted living group home. Thanks for dealing up the judgement card!

Neat. I had relatives in Edmonton and visited in the 80s. I don't remember seeing this. I appreciate these photos and info now, Deb. You're bringing me back to my roots. Proudly, I'm half Canadian - the better half.

I've seen that structure before but never had a clue as to what it was! At first glance it looks like an eagle.

You won an kindle copy of my book. I've been meaning to holler at you for several days. Shoot me an email with your meal

Wow that is one seriously ugly sculpture. And I know from art! It looks threatening to me, actually, not peaceful at all. But I guess that works...

wow, I'm learning alot in these posts, that is a beautiful sculpture,

ack! ugly... but then, expected for a pope

Thank you for explaining the meaning of this card, for I drew this card upright one day and wasn't sure as to what it meant.

I so much love these.

Love the pigeon! I also love the Judgement card. Makes one take stock.

Huh, at first I thought it was some kind of satellite installation or something.

Neat idea, although I do not care for the figurehead.

I didn't associate it with Catholicism either. Had a bit of a an ultra post-modern native look about it (if that is possible). Interesting choice for the judgement card, Debra!

The sculpture is interesting. Somehow the name Dove of Peace sounds so much classier than Papal Pigeon.

As far as the Judgment card..that sounds like a wonderful card to have come up.

The sculpture is beautiful and very interesting! Papal Pigeon, makes me laugh! LOL! Thanks for explaining the Judgment card! I am learning so much from you!

I was a bit more excited about it before I read what it was. I thought it was a hawk or eagle to honour a local First Nations tribe. Oh well.

This tarot series you are doing is awesome! What a great way to see your world in a new light. Clever you!

I hope the pope appreciated the papal pigeon!

This sculpture is quite cool! Judgement sounds important. Internalized limitation is not a good thing.

I'm going to pull out my Tarot Cards....I hope I pull out the Judgement card.....I could use it.

Hi Debra!
I've been reading your recent posts which are always interesting!

Somehow I had missed your Butterdome Tarot post ~ I think the public comes up with the most apt nicknames for things!

Your series on Sheffe was fascinating. Zebulon Pike looms large in our local landscape, but I had never heard of how he died before. Kudos to Sheffe for preserving the lives of his troops. We should all die in such a lucky fashion ~ but a few more good years past 88!

I'm glad that you explained what the Judgement card was, because until you said dove/papal pigeon, I couldn't figure out what that statue was.

I love the new spin you put in tarot!!
You celebrate the christian holidays too! Whether we like it or not they mean family time in our parts of the world. And that can be a lot of fun!