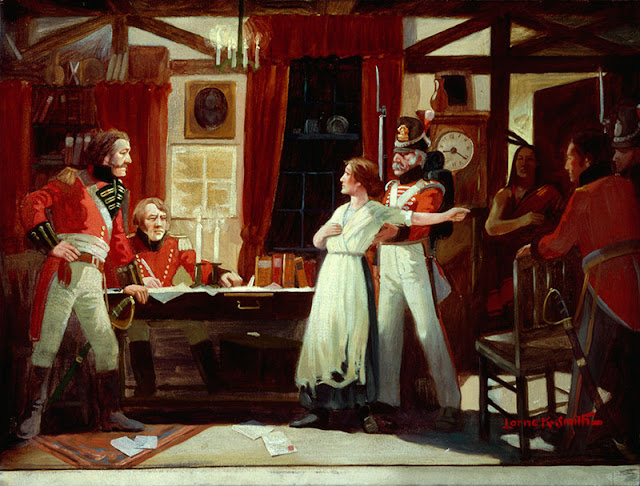 When I was a girl growing up in pre-feminist times, female heroines and role models were hard to come by in school. Usually, teachers could only dredge up a standard handful like Joan of Arc, Good Queen Bess, Marie Curie or Helen Keller. But here in Canada the biggest name of all was Laura Secord, heroine of the War of 1812!

Laura Secord was a Queenston farm woman whose husband was in the militia defending Upper Canada. In October 1812 after the Battle of Queenston Heights, she went out to search the battlefield, found her seriously wounded husband among the dead and dying, got him home and nursed him back to health. That's the kinda gal she was.

In June 1813, the lower Niagara peninsula was occupied by American troops. Their northern progress had recently been thwarted at the Battle of Stoney Creek but they were planning another offensive.

Like other locals, the Secords were forced to billet American officers in their home. While serving them dinner on the evening of June 22, 1813, Laura Secord overheard them discussing plans for a surprise attack in 2 days' time. So that night she sneaked away to warn the British commander, Lieutenant James FitzGibbon. She "walked alone nearly 20 miles by a circuitous, difficult and perilous route, through woods and swamps and over miry roads" to reach the British camp the next morning. Because of her timely warning, the dramatically outnumbered British and Mohawk warriors were able to repel the Americans at the Battle of Beaver Dams on June 24, 1813. Huzzah!

Tradition says Laura Secord took a cow with her in order to get past American sentries without raising suspicion. Today the cow's presence is doubted by many historians but I remain a true believer. The story's just not the same without the cow! Current historians also say Laura Secord got hopelessly lost and had to be rescued by the Mohawks who took her to FitzGibbon. 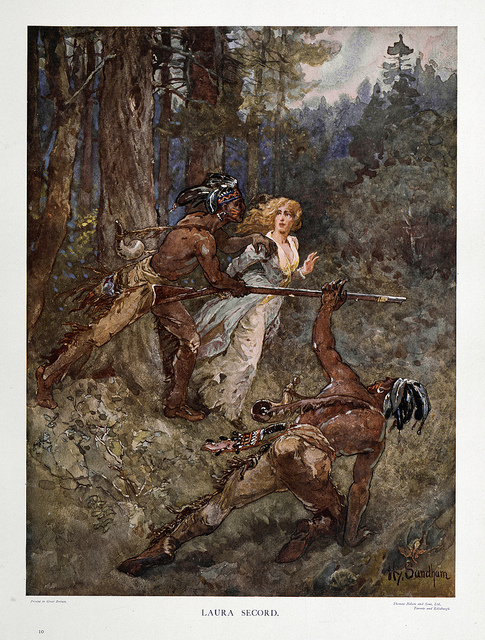 Some historians, however, go so far as to say that the British had already got wind of the Americans' plans and so Laura Secord's warning didn't really save the day after all. Heresy! Blasphemy! I will never believe such revisionist lies. Laura Secord will always be a heroine in my heart. Two hundred years ago tonight, she saved Canada. That's what I was taught in school.

[And don't forget to enter my Chocolate Stanley Cup giveaway, if you haven't already -- click here. The contest is open to Americans too. We're all friends now.]

If there wasn't a cow involved, why would they have named a chocolate/ice cream company after her? Come on historians, THINK!

and here i always thought she was a candy bar...a good candy bar though!

It's amazing what they don't teach us in our history classes. Here south of the 49th parallel that is.

Love this bit of history! We had the wonderful opportunity to visit her old homestead when travelling through Ontario (Queenston). It was a great experience and a fantastic story! Thanks for sharing...

Hang onto your beliefs!

I believe... don't know about the cow story, because I'm an American and don't think I'd be so easily tricked...hahaha!!!

I think many women did great things, but the stories got changed or just plain covered up and forgotten. Lots of interesting stories from Canada. I never really learned much about Canada in school, so thanks for sharing these stories.

I only had heard part of this before, I always learn so much from you,

Yay..me too..always loved Laura Secord and learning about her in school..she rocks!!
Hugs kindred
Beautiful post..loved every minute of it!
Victoria

I always heard her tale with the cow ... and it is so much better that way.

This story just made me crave chocolate, so thanks for that...

I love the cow idea. What would the equivalent be today? A Prius?

It was the American's fault for using her home (as long as others) to begin with. They violated the 3rd amendment to the US constitution. Karma?

Laura Secord for Prime Minister! Posthumously of course!
I love these history lessons you give, Debra. You are so good at it and hook me every time! You could write for the CBC you know!

I knew the story, but for me she will always be a chocolates and candies brand.

I don't anythng about Laura, candy bars or cows. But any woman linked to chocolate is alright by me!

Men, men, men, all you heard about was the men in history, so YES, it was nice to hear about female heroines.

The story is absolutely not the same without the cow. I refuse to believe there was no cow :)

God you are so interesting - I have never heard of Laura Secord.

I have always loved Laura Secord and I've always been a true believer of her most important role in saving Canada from the Americans!

Laura Secord is so amazing she has ice cream named after her and that's a beautiful Canadian thing.

I think all us Canadian women have a spark like Mrs. Secord did. We have loyalty, honour, bravery, and strength that is unrivaled by many! :)

She just wanted to meet some Indian warriors. Her tub full of chocolate first date special was a big hit with the Iroquois.

I believe that story too..glad we lost.

Gee, what a surprise, some historians try to take credit away from a woman, claiming that the news had already gotten there? Next, they'll claim she was really a man disguised as a woman.

Laura Secord is one of my favourite stories in Canadian history! I grew up around that area of Southern Ontario (only a 30 minute drive from the aforementioned Stoney Creek!) so I always loved hearing about our semi-local heroine. I didn't know she was married though...I must have missed that part of grade 8 history class!

I never learned about Laura Secord in school! I feel ripped off now!