The only thing better than winning the real Stanley Cup is winning a Stanley Cup made of CHOCOLATE! And that, my friends, is exactly what's at stake in this giveaway. And yes, HRH and I bought it at the Hershey's store on the moon that I mentioned in Friday's post. 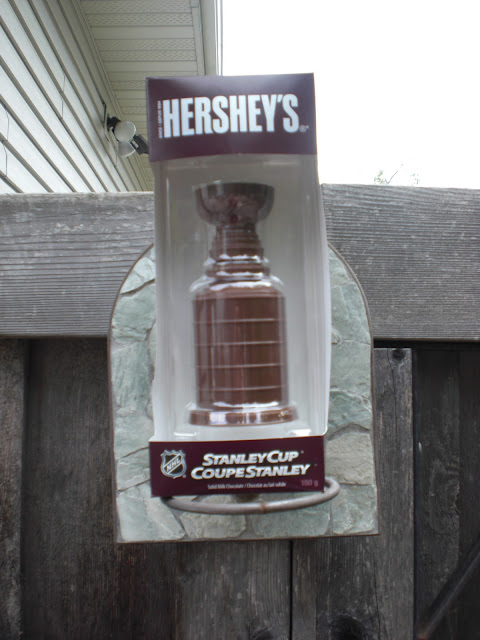 Even though there are no Canadian teams left in the playoffs, at least the NHL Finals feature two of the "Original Six" teams. It's the first time since 1979 that we've seen such a matchup. So who are you cheering for -- the Boston Bruins or the Chicago Blackhawks? 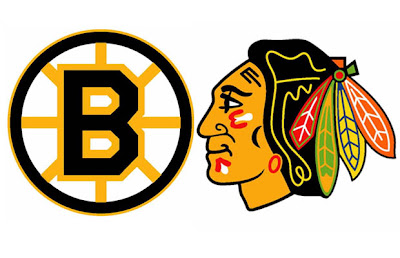 If you'd like a chance to win this chocolate Stanley Cup and nom, nom, nom your way to hockey dominance, here are the rules as established by the Commissioner of the NHL, Gary "The Bastard" Bettman:

1. You must be an official Follower to enter. Old, new or just signed up in order to enter the contest, it's all good. And it doesn't matter where you're from in the world, the Cup will be mailed anywhere!

3. Only one entry per person.

4. The winner will be chosen by random draw made right after this year's final Stanley Cup playoff game and will be announced the next day. So you can enter at any time until the real Stanley Cup is won by the 2013 championship team.

i say jagr deserves one more before he retires! i am rooting for my friend! (you don't have to enter me in the giveaway...i hate chocolate...shhh!!!)

Ha, I would love a Stanley Cup chocolate. Consider us entered. I love hockey... I'm just sad my Avs suck now. Maybe next year will be better. Admittedly, I don't really care one way or another between Boston or Chicago who wins.

Hope it doesn't matter that I know nothing about hockey....nada...zip..I recognize a hockey stick and puck ar so I guess there is that.

Chocolate is perfect for my new diet. It's filled with antioxidants.
Mary

Moi?? Not enter a chocolate giveaway, especially chocolate imported from the Moon?? Our Sabres, well, I don't want to talk about our Sabres. I guess I will root for Boston for no particular reason.
Debra, you always have the best giveaways. Please give our thanks to HRH too.

Oh my! A Stanley cup made of chocolate AND from the moon??? That's gotta hold a lot of good luck!
Enter, YES!

I am rooting for the Bruins! That chocolate looks damn good from where I sit! :)

Of course the Cuckoos are entering this giveaway for chocolate imported from the moon. HRH and you are to be commended in your choice of luxury imports....chocolate kicks butt. To bad others in the NHL didn't follow suit but there is always room for blood on the ice next year. As for the game between Boston and Chi town....I'll take Boston for no particular reason.

BTW, I saw a really great documentary on the tellie yesterday about Pussy Riot. Made Ms. GK and her Mom sit down and watch it too. I always knew I was raising an anarchist in GK. The nut does not fall far from the old tree. She wants to find a neon knit cap now and cut holes in it and wear it to school. And she is going to do a term paper (on her own) on the struggle of woman's issues in society this next week. She was really impacted by the church and state part. Just thought I'd share the good stuff with you. Oma Linda

Well St. Catharines used to be a farm team for Chicago when we used to have a Junior A team so I'm leaning towards the windy city but truthfully I'm pleased these are 2 of the original 6 that I'll be happy either way!!!

BLACKHAWKS!!! I was born in Chicago, so yeah, GO HAWKS :)

Wow, Hershey has a store on the moon! Chocolate is truly a 'universal' nom nom nom :) This is an ultra special treat considering how far it's come from, so yeah, count me in!

unlike the real one you don't have to share it and it won't break my teeth.

BOSTON! Our sister city in so many ways. But to be honest I will probably not watch a single game Debra....that's just the way it goes. lol So no need to enter me in giveaway. thanks.

Well, I've gotta root for the Blackhawks. Not only is the owner building a house on the little island where I live, but he's also a Celiac, like me. Ok, those are crap reasons to root for a team....I like chocolate though. :-D

Hi Debra
Please enter me in your giveaway. I have three Grandsons who are hockey players. And would love for Grandma to give them the Stanley Cup! I am your newest follower.
Nancy

Well, let's see. I used to live in Chicago. But now I live in Massachusetts. Who to root for?

This is my only chance to win the Stanley Cup. Well, in this life time, at least.

Hi Debra,,,just stopped in to see what a chocolate trophy would look like. BTW.....pls don't enter me in the giveaway...I CERTAINLY don't need to eat any more chocolate. LOL

Going for Boston!!! Chocolate?? Well, I always have room for more chocolate! LOL!

Now that truly is the HOLY GRAIL! :0)

Thanks for checking up on me. We're doing okay. Things are looking up a bit.

I am leaving a comment to say i want chocolate. Is that right ? have I dotted 't's and crossed 'I's ?

I follow, so send it to me. Let's skip formalities, just put it in the mail ;-D

I heard the word chocolate, and had to drop by. You're always having fun here.

I think I'll go with the Boston Bruins.
It's a nicer name than the Chicago Blackhawks, and I'm guess they have a cuter goalie.

Just stopping by to say hello there! CHOCOLATE! YUM YUM.

everyone I know is rooting for Boston..I like the Stars and they're not in it...so?..I'm watching old movies in stead.

The "Hershey" thing caught me..I live outside of Hershey, Pa...Don't enter me...I'd have to nom,nom,nom until it was all gone...

I would like to enter this contest. I don't know really either teams but since I lived in Chicago for a few years I go for the Blackhawks.

Since I am from Quebec I think there is a clause in the Constitution that says I get 10 entries automatically. LOL!!!

i dislike the hershey admin and how they treat workers... this isn't about that, the product is tasty....

I used to follow hockey but alas I moved south and there is no ice. Hey there could be a new game, Floating Hockey. Teams are in inner tubes and they have to hit a floating puck. Could be really fun to watch. More fighting and drownings. BWAHAHAHAHAAA!
It could happen! You know with global warming and all.
Well anywho, Please put my name in cause I'm a chocoholic and I like Boston.

Also, thanks for sending the newbees over to my blog. They have no idea what they are in for. (insert more evil laughing)

Totally the Bruins! My whole family is from Mass :)

I normally don't sign up for any give aways...but sheesh!!! this is Chocolate!!!

OK, you tempted me long enough, I would like to enter !!!

Enter me please. I am a big fan of Hershey and the Stanley Cup.

I have to cheer for them - everyone else I know is rooting for Chicago, and I like to be different!