Tahiti is the largest and most urban of the French Polynesian islands. This photo was taken at our resort hotel in Papeete, the capital city. We took a bus tour around the island before boarding our cruise ship, the Paul Gauguin. 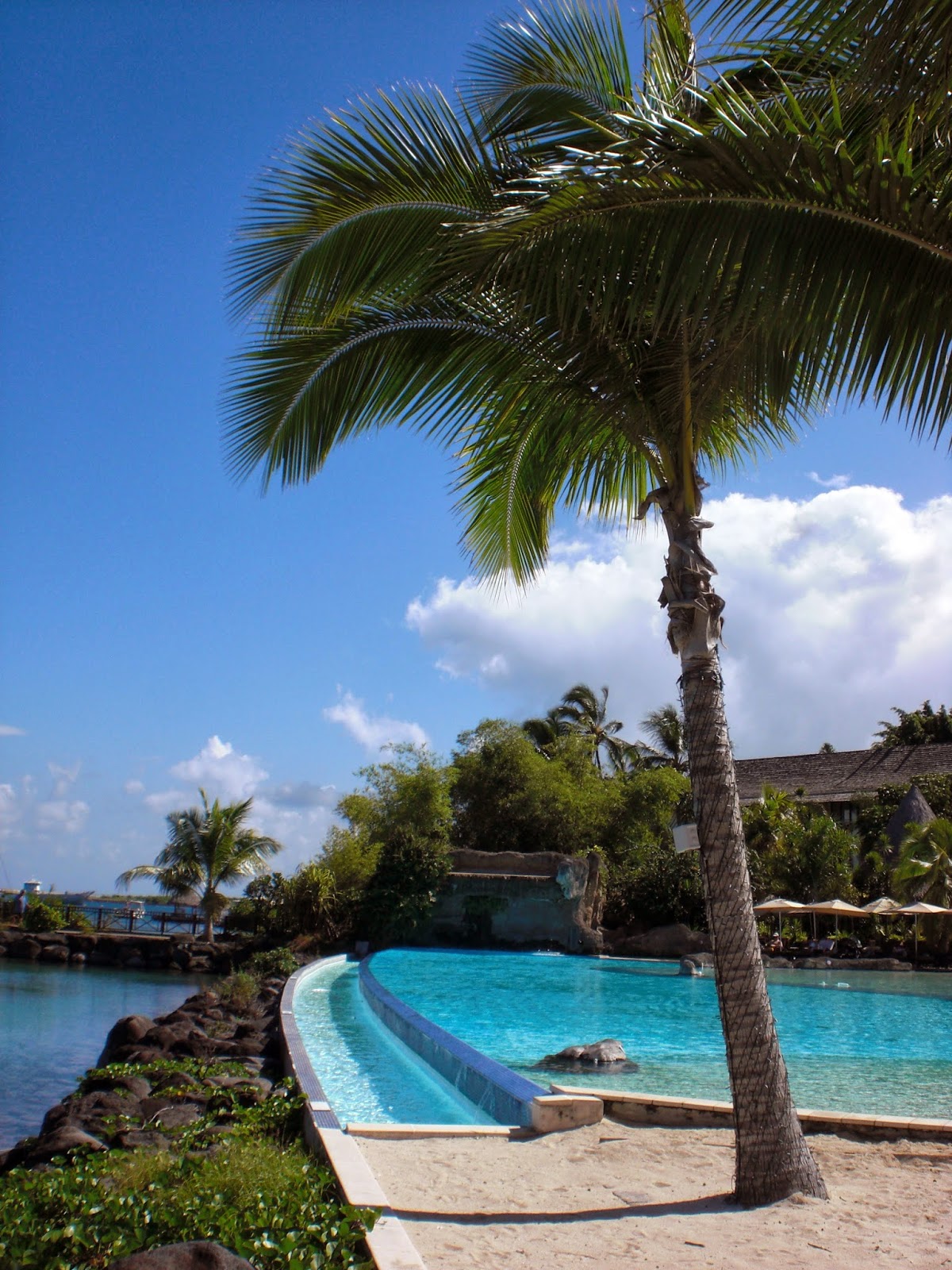 On the island of Huahine, there are several sacred sites of ancient Polynesian temples called marae. Standing stones were placed upright on the shore, looking out to sea. Historically, most marae were destroyed under the influence of Christian missionaries. The remaining few are now starting to be restored. 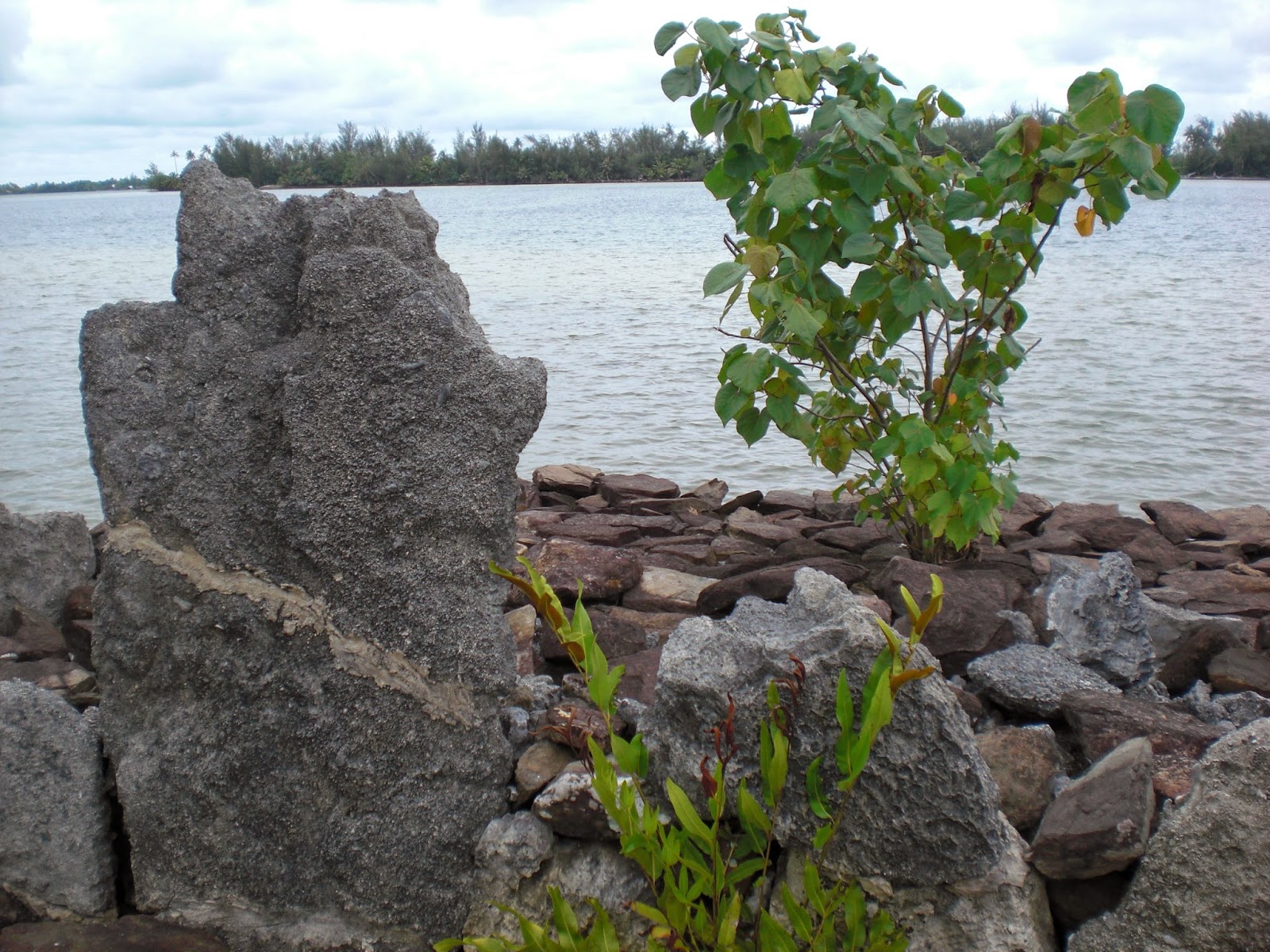 This photo of the Paul Gaguin was also taken in Huahine. 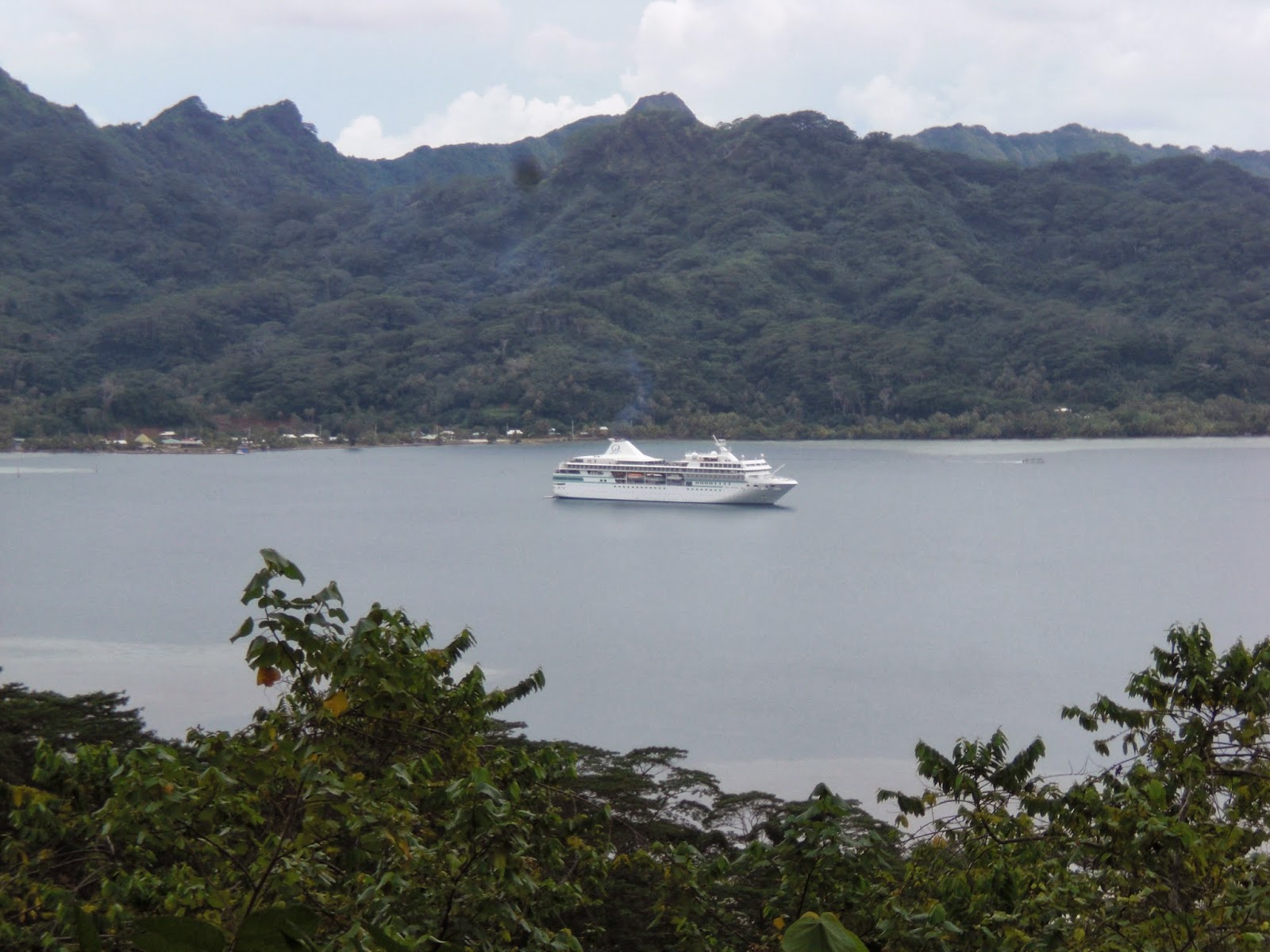 It rained cats and dogs in Bora Bora. But on the second day, it cleared up somewhat so we were able to do an island tour by "Le Truck," the local tourist bus line. Bora Bora is a beautiful place and features the craggy volcanic mountains common to most of French Polynesia. 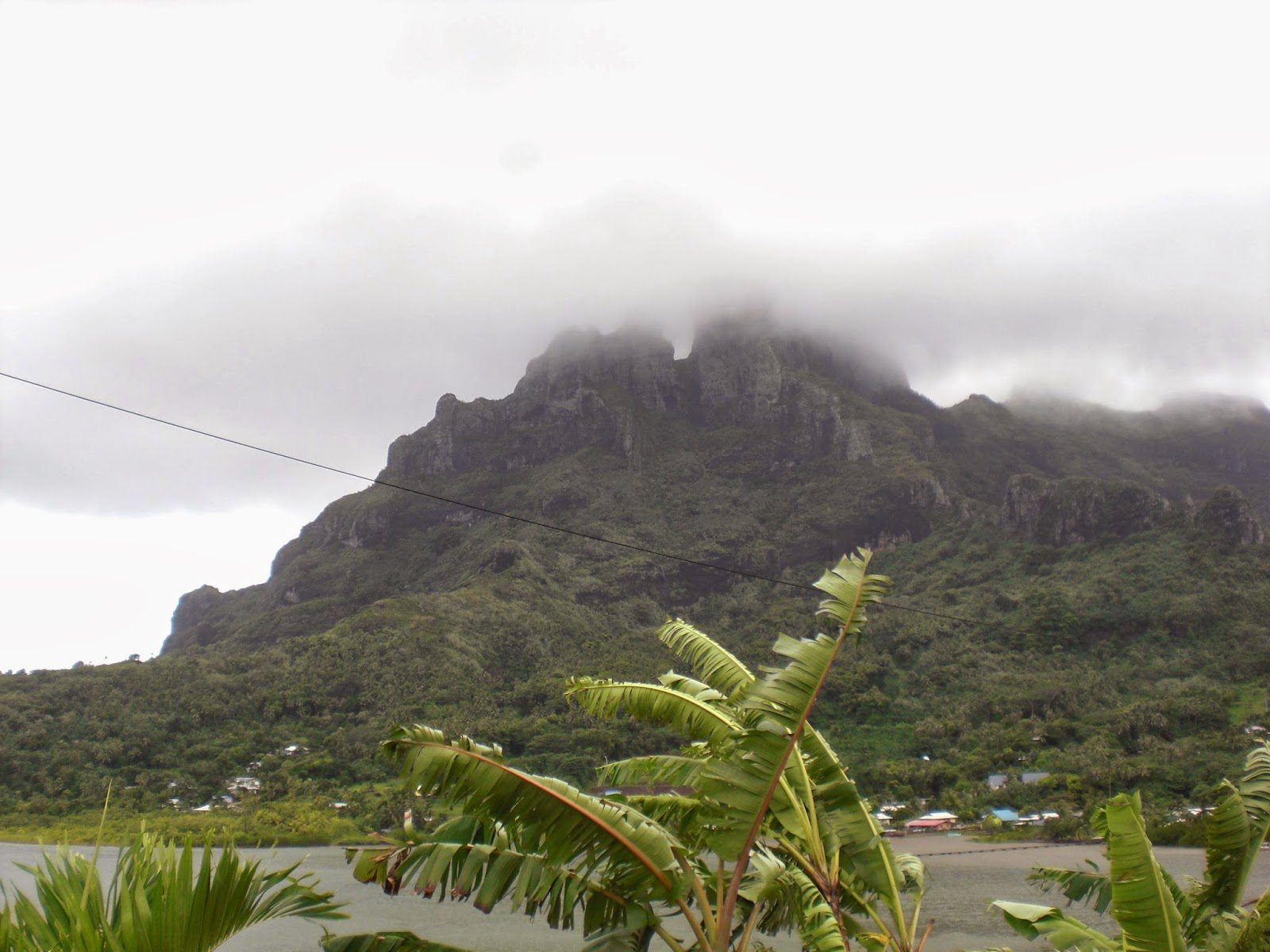 Rangiroa is technically an atoll rather than an island per se. We wandered through a small village, down to the spectacular shore line. Look at the three different shades of blue in that water! 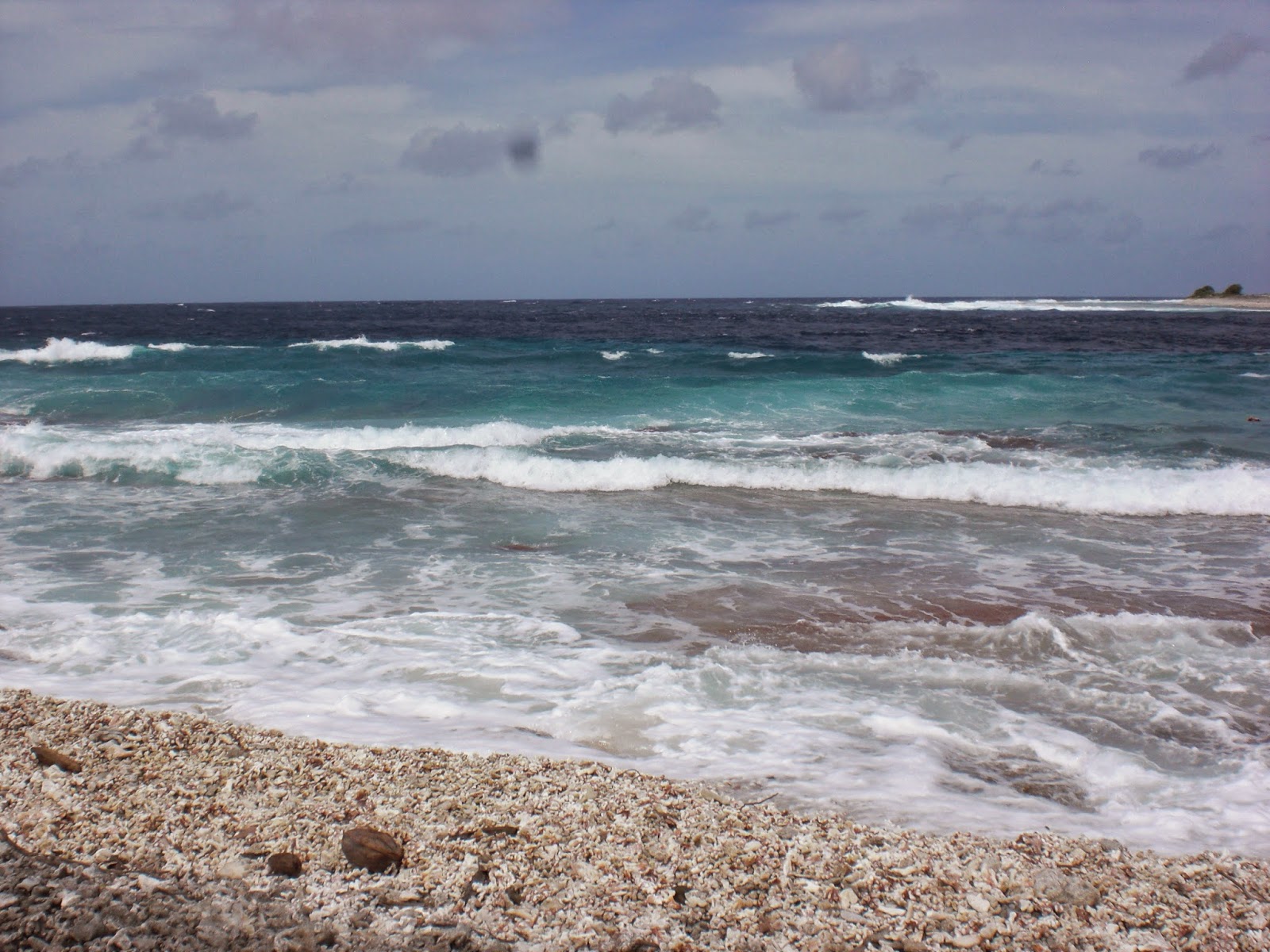 Tomorrow -- Selected photos of the other three islands we visited.

That looks so beautiful! We are on our own little getaway and wishing we would have gone for longer. I'm so over winter. Rain is not snow, so even rain makes a Canadian happy!

what a beautiful place. i can't wait to see more!

What a gorgeous place to spend your vacation. Awesome.
Mary

Purty. Not much else for me to add. It's just beautiful.

you must have had the time of your life.Its amazing to think the effort it took to position the standing stones,

Color me jealous - and happy for you too. Bora Bora is someplace I'd love to visit one of these days. That water, ahhh!!!

I love seeing these pictures. Thanks.

makes me want to visit

Tahiti used to be very popular in France in more affluent times as THE place for a honeymoon. Did you ? Go there on your honeymoon, I mean ? Please admire my legendary discretion ....

Nice ... no snow. I can't recall what greenery looks like anymore. ;)

My next man needs to be rich, so I can stay all winter in these lush locales! Beautiful Debs, you lucky dogs! Rain or not, who cares! Beats all that snow!

Wow, that's beautiful. As I sit here surrounded by gray skies, yellow grass, and neverending snow, I don't think I have to tell you I'm envious.

Beautiful pictures. Reminded me of living on the island of Oahu in Hawaii for 4 years.

I was Hawaiian nose humming the whole time I was reading your blog. Couldn't help myself.

OHMY...GAWD! I love these photos. Tahiti and Bora Bora...two areas I would LOVE to visit! That last image is stunning. Tell me more MORE about this trip!

Oh, it must have been hard to leave! It looks like paradise.

Oh, I needed these shots this morning to remind me what a world without snow looks like! Absolutely gorgeous. I hope you had a fabulous time!

So magnificent! And i'm thinking that Christian missionaries took it upon themselves to destroy a lot around the world. They piss me off! Oops, better stop there...

Thanks for sharing your gorgeous photos! I look forward to more! :)

Just catching up with your last couple of posts!! I am so jealous!! Seriously though, I'm glad you were able to get away from all this cold. Look forward to seeing more photos!

Yes, as the others have said..It looks beautiful. What a lovely place to escape the last of the winter blahs.

Ahhhh, my breath slowed and deepened as I relaxed into these scenes. Thank you. Looking forward to the next batch.

Paradise! What a wonderful place Debra!
I love that pool! I can imagine myself there right now........

Gorgeous, absolutely gorgeous. It's nice to know that such beauty exists in the world.

It all looks beautiful, you took some great shots. So did you get to swim in that pool?

Hey Joey, no I didn't swim in that pool although others did. I was content just to look at it.

Beautiful! And love the photos! Great shots! I'm sure it was even more breathtaking in person. The various shades of blue in the water are amazing. Interesting about the marae - will have to do more research on those.

Now I'm feeling an intense urge to swim... I wonder why!

That looks gorgeous, even when it's overcast.

Still have two feet of snow in my front yard - temps in the low forties and winds gusting to forty.

It looks beautiful.
enjoy
the Ol'Buzzard