I was absolutely thrilled last month when gorgeous and talented Conchita Wurst, a drag queen from Austria, won the 2014 Eurovision Song Contest with the spectacular song "Rise Like a Phoenix."

This song is worthy of a great diva like Mariah Carey or Celine Dion but there's no need for either -- Conchita delivers the goods! Love the lyrics, love her performance, what a voice!

Sometimes the media mistakenly characterize Conchita as transgendered. However, she simply calls herself a gay man who does drag. But what about that facial hair? Doesn't it "ruin" the drag illusion? Not at all. If she were just engaged in traditional "gender-bending," she would not be bearded, it is true. But her style is what's called "gender-fucking" so the beard stays! Her beard is a statement that all rigid gender-based appearance rules are irrelevant and oppressive. 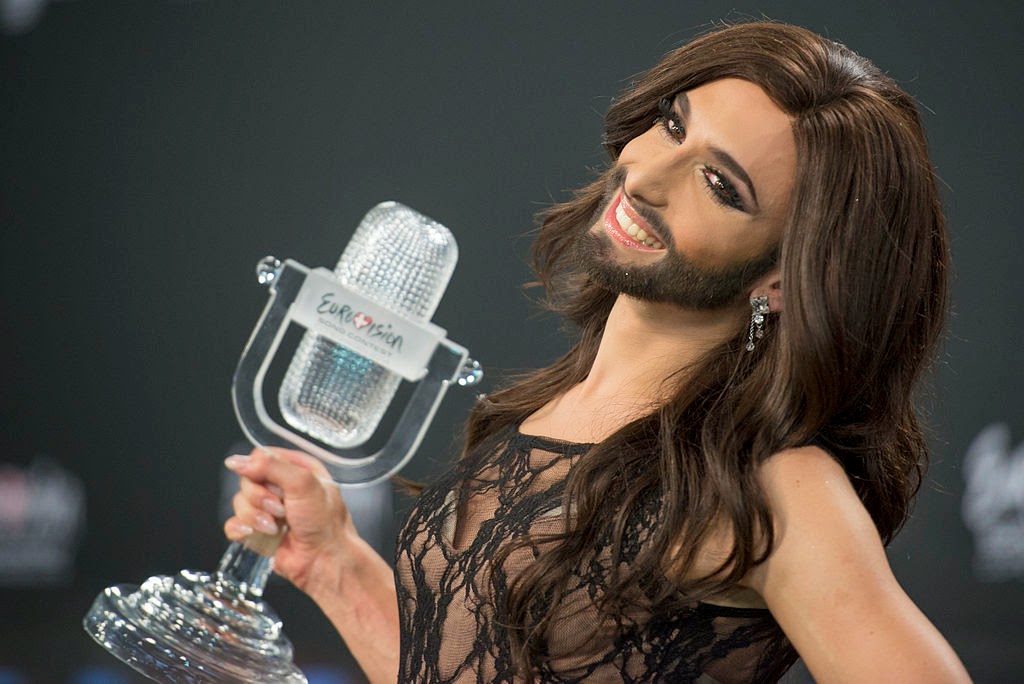 And I've noticed from this summer's TV coverage of various Pride marches and events in Canada and around the world that her bearded-but-still-elegant drag look is being widely imitated!

he is very pretty and has quite a voice. i was happy to see him win! now we know the story behind the bearded ladies from the circuses!

Great voice. This is the first time I've seen him.
Mary

She's beautiful. When a person is dressed "as a woman" as far as I'm aware they like to be referred to as she.

See I came out the closet in more ways than one for this post. :D

It's always great when someone is so talented that they force the close-minded or bigoted to confront their prejudices and (hopefully) reevaluate their belief system. Conchita is great.

I have a totally opposite opinion on her, Debs :) It's the worst Eurosong winner in many years... nobody even remembers the song only a month after.... It's just not a good enough song (no melody, mediocre chorus, clichéd perfomance) and what won was the whole drama and circus around it, not the song itself. I wouldn't mind him winning if he had the best song. Sweden is the moral winner.

and PS that isn't even his natural beard, he glues it onto his face... which means he is doing it only to draw attention and shock people.

Well, Dezzy, as befits The Hollywood Spy, you have the inside scoop as always! Thanks! I was wondering about that beard too but I don't care, I still love the song and her look, LOL!

Conchita has a gorgeous voice! I love the gender bending too! This definitely takes balls to keep the beard while in drag.

I tortured myself and watched the fiasco that is the Eurovision Song Contest. I was delighted for Conchita and Conchits gave a moving speech after she won.

Although I don't like the song, the ideals are all that really matters.

WOW! She has a powerful voice. Absolutely beautiful!

what a powerful voice..love it..and her.

I was thrilled as well, to see her win, and find the facial hair to be bizarrely intriguing. could it happen south of the border??? Don't think american idol is quite 'there' yet... Happy Canada Day! L

What a talented person!
Beard, dress, eye shadow, what does it matter? There's a person standing up there. That's what counts.

I don't care if he wants a beard, doesn't change how the song sounds, but I do think it spoils the face.

He sounds great! Having a full beard like that must make putting make-up on a bit of a challenge.

I've never heard of the song or singer. I learn something new here pretty regularly; like on Adam's blog. It does take a little getting used to (the beard), but it's quite intriguing.

Ah, okay I was wondering why you called her a her when she is a gay man - but reading through the comments I gather when in drag gay men like to be referred to as 'she'.
Still learning, Debra. :)

I'm always excited to learn about warriors who break the mold. She's beautiful with a powerful voice. Kudos to Conchita!

A 'trail blazer' for sure! We were enthralled with his performance and so happy he won! Such a victory on so many levels, Debra. Thanks for posting this. So I was 'gender-fucking' on that Halloween night so long ago?....

It's really the beard that does the trick. Without it, he (she) would be more like anyone else.

Oh just one other thing, I should of commented on the song, it's interesting that here in the UK Eurovision songs never get high in the charts if at all, but Rise Like A Phoenix made it to No 17 and No 10 in the Irish charts.

Now excuse my while I go and stick on my fake beard.

The song was beautiful and I am all for being 100% true to yourself. A huge step forward and 10 points to judges with open minds xx

What an exquisite human being… soul soaring on an angelic voice.

Great voice! What a performance! ;o)

I'm just glad that Dezzy cleared up the whole beard thing. Someone that beautiful being able to grow a better beard than me would just make me sad.

I do see this look more and more. I love anyone that refuses to be pigeon-holed and this deserves a prize. And the voice? Oysters vey, sooo good!

I really enjoyed the song, but I have to admit I found the beard distressing. I simply don't like beards on anyone, let alone someone who looks like a beautiful woman. Take care!

Beautiful voice. I think gender bending is something so common to me that I always have to remind not everyone grew up with 8 family members who are gay, a drag cousin and a family headed by women... Amazingly talented !

As a woman of ahem... a certain age, I applaud this pretty man dressed as a woman with this full beard...makes a few hairs on my chinny chin chin look very sparse!

I must use the term gender fucking in a sentence soon! Good for him.

damn it! something is wrong with the sound on this computer. but i agree with vanessa - without the beard he would just look like all the other drag queens. great post. cheers!!