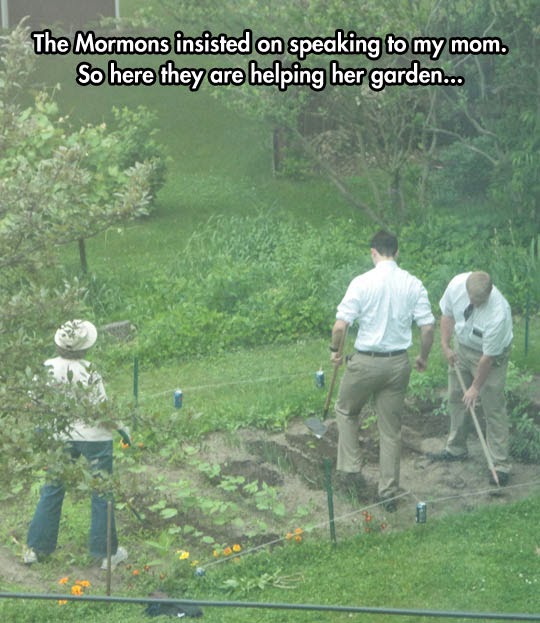 I never met a Mormon until I moved to Alberta. In the late 1800s when polygamy was outlawed in Utah, 3200 Mormons moved north to this province. They were fruitful and multiplied and now Alberta has 50,000 of them (but they're no longer polygamous).

I've worked with a few Mormon men over the years and at first, I was worried that they would give me grief because I'm openly lesbian. I was prepared to fight if I had to. But what I found surprised me. Yes, they were indeed very conservative. But they were so right-wing, they actually embraced that odd Libertarian form of social tolerance. If they regarded me as being on the gay fast-track to eternal flames, they very nicely kept that opinion to themselves. And best of all, most of them had delightfully good senses of humour, so we got along just fine. I quite like all the Mormons I've met!

I did, however, profoundly shock one young Mormon guy, although not with my sexual orientation. I deliberately told him, oh so very seriously, that what Alberta needs is a good NDP (left-wing) government. The look of horror on his face, LOL! It was naughty of me to tease the poor little bugger that way, I know, but I just couldn't resist.

I find that very and truly religious people actually are often tolerant, which makes sense really, doesn't it ? X

I understand that they are really tolerant. I also love how important ancestry is to them and the fact that they keep so many records that they offer freely to genealogists around the world.
Mary

deeply religious people trouble me. give me a pagan any day!

The Mormons I've met were very friendly and compassionate people. I worked with a fantastic Mormon lady who taught me a bunch about her religion - because I asked.

A lot of us conservatives don't really care about the life styles it is the destruction of the economy that is important.

That'a a great photo! I think we'd all get along a helluva lot better if we were all as tolerant of differences as they are.

Yes, for the most part Mormons are tolerant of people who do not share their religious views. Wish I could say the same for other religions. Just wish they wouldn't go door-to-door......

you just couldn't resist, lol,
I do like the fact they do not shove their beliefs down our throats, I cannot stand people coming to our door telling me how to live my life, its my opinion that religion is a private matter, just between us and whom ever we choose to worship,

Nothing better than shocking a Mormon eh! We have a Mormon Tabernacle right here in River City. We drive by it every day and guess what you can't go in, just too much rigamorole.......oh well they miss out on us hordes of humourous gays again!
Ron

You find good and bad in all religions, and although I don't know any Mormons personally, my older daughter does. Her boyfriend's parents (I'm not sure, but the entire family may be) are Mormons, and although they are very dedicated to their faith, they don't shove it down anyone's throat; they just quietly go about their business, and live and let live. My daughter and her boyfriend live together (in sin...hahaha), and the parents don't mind at all. They love my daughter and treat her like family.

I get confused about religious people who are intolerant. If God is the being it is supposed to me, doesn't he love everyone no matter what? It's nice to hear of the tolerance of the Mormons. :)

I have some Mormon relatives good people.

when I first moved her to the apts I had 2 of them knock on the door..they explained who they were and want they wanted to do. (spread the word)..I said thank you very much but I'm a pagan and I'm not interested..they smiled and said can we come in so you can talk to us about your religion..I said no don't think so, but thanks for asking and then they left..pleasant nice guys..now the Baptist guy that came was not so nice, got plum belligerent with me.He said have you found Jesus, and I said no I wasn't looking for him, but if he was looking for Jesus I could promise him he wasn't here.

you are a pistol. but i have to agree with silver bunny. people who really live their lives according to the golden rule are usually accepting of others. but i have heard some really nasty stories about mormons and their beliefs - which i will not go into now. i treat people as they treat me. it can be difficult to love people when they despise you. great post. cheers!!

I, TOO, have enjoyed every Mormon I have ever met.
They are really a wonderful group of people.

I've no experience with Mormons beyond dealing with them when they knock on my door in an effort to convert me to their religion. Next time they stop by I shall try to get them to do help me weed the gardens :)

I would love Mormonism if it wasn't for the historical racism of the Church, the polygamy, their rules against alcohol and Mitt Romney.

I've never met any Mormons, in fact the only ones I've ever heard about are the Osmonds. :D

I used to do a lot of artwork for a Brethren family that ran a print business, now their faith is strange, but I still really liked them.

Well live and learn - I didn't know the Dippers were not the Mormons' cup of tea. Oops - they don't drink anything with caffeine do they? Hmmm You lesbian, caffeine drinker, you. Definitely on the road to perdition, Debra! :)

It's strange how nice Mormons are until they step into the voting booth. Then they vote for the nastiest piece of work Republicans there are (Or whatever the Canadian equivalent of Republicans is - I'm hoping that there is no equivalent, I always expect better from Canadians)

I knew a Moromon woman once, and she couldn't understand why everyone thought she was a lesbian (played on three softball teams) Her reasoning was "you 're not going to be a lesbian if you're a faithful Mormon!" I didn't know how to explain to her that those were two different things. Last I heard, she had quit the Mormon church, so hopefully that means she has come out too.

Hahahaha, to Anne's comment. That was funny. Good stuff.

Mormons and also Jehova's Witnesses can be extremely nice people.

That being said, I never have approved much of how many former members have been treated by their families for losing their faith.

I know there are exceptions of course, but my biggest pet peeve is a controlling theological group.

I too have a lot of time for the Mormons.
I admire their stance on family, morals etc.
I admire their tolerance.
Only speaking about the ones I have met of-course but they have given me no pain.
No trouble for me to have a chat with a missionary or two. they are polite and well educated.
Totally on another path, Big Love remains one of my all time favourite TV shows. Big love quotes fly thick and fast between Prue and I. lol Hope you are doing okay Deb xx

As a kid I was around a lot of Mormons, they would often trick me into going to religious concerts. "Come to the skate park, it'll be fun, I hear there's a punk band playing." But they were always nice about it. Now if they're governing church body would only cut it out with trying to block gay marriage.

That's pretty awesome! My lawn needs mowing. If anyone would like to come spread the good word to me while pushing a lawn mower, come on over.

I too have had experiences with ultra-religious people that are positive. My [now diseased] RC brother-in-law used to buy me Witch calendars and day books for christmas, and was always interested, never judgmental. At his funeral we discovered that he was some 7th level purple-robed dude, but kept it to himself. Same with an Orthadox Jewish friend, she finds similarities between her faith and mine, rather than the differences. I think they are not threatened by diversity, because they are so sure of their path. Other religious people are not so kind, this is not about them!

I never met any Mormons. Good that you got along well. Have a lovely Thursday.

I've never met a Mormon either! nice to know you've had a nice experience.

I worked with a young married couple who are Mormons. They are gym teachers and the nicest people at that particular high school.

I would have loved to have seen that fellows face when he contemplated a NDP government in Alberta! Heck, I love the reaction I get when I even mention NDP to some people I know living in Alberta! LOL

Haha, that's wonderful to see them digging into the dirt with your Mom. I've liked all the Mormons I've met too, despite my Jewish Liberal sass.

That probably scared him more than your sexuality! If the conservative side of my family is anything to go by...

Years ago we had Mormon neighbors. They were nice and after having dinner at their place once they brought up their religion. They were not pushy or judgmental. I even took their book home and found the story odd. But after thinking about some of the Catholic stories I had learned maybe it was not that strange by comparison.

I used to work for a Morman hotel chain. At our location out of about 600 employees there was one Mormon who only worked about 4 hours a month because he was on his "mission". He received full benefits, vacation, etc.

Haven't seen a Mormon in my town in quite some time. But, to each their own.

You are a naughty girl! LOL!
I think it's great that you have got along with them nicely ;o) That's the way it should be ;o)

Thanks so much Debra for your post; just wish I'd seen it earlier. In case you hadn't seen it on the sidebar I'm a Mormon. I've been following your blog for years as you know and I find that you quite often give me food for thought. Thanks for tolerating me and my religion and writing this delightful post.
Johnina