And Of Course She Made Him Sammiches 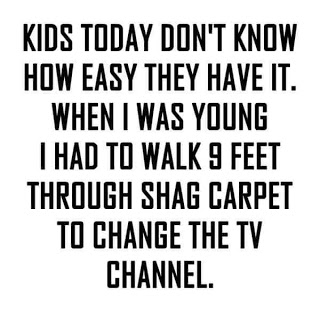 Forty years ago when I was in university, I lived in a furnished suite on the second floor of a house. The landlord and his family lived downstairs. They were good people, immigrants from Europe who had been DPs after the war (remember that term?), and had worked hard in Canada to build a decent and secure life for themselves. However, patriarchy reigned supreme and unchallenged in that household. Every night after dinner, the father would sit in his big recliner to watch TV. If he wanted to watch a different station, he wouldn't get up and switch it himself, oh no. He would simply yell at the top of his lungs, "Mama! Come and change the channel!" and his wife would obediently drop everything, run in from wherever she was in the house, switch the station and then return to whatever she had been doing. 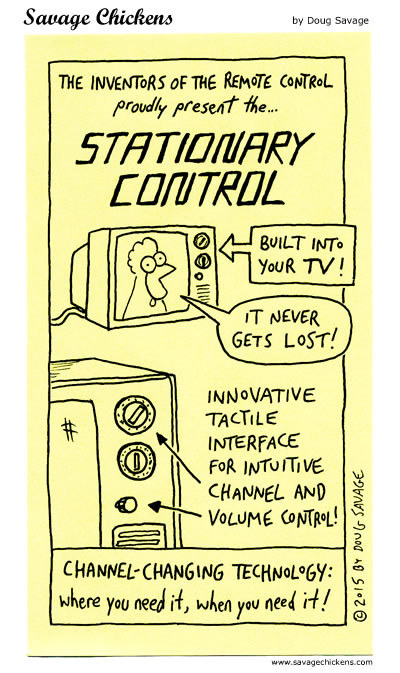 my sperm donor is like this and he was BORN HERE! fuck that shit in MY house!

LOL! Oh yes, how easy the kids have it today!
I could tell stories......but I'll spare you this time!! I heard that!!

I suppose it is true that remote controls are pretty convenient, but at least you can't lose a wired remote. I used to have a TV with dials and knobs that you used to not "change" the channel, but actually retune the TV. I kinda miss that little TV.

I knew A LOT of couples like that, Debra, when I was growing up! Just in the neighbourhood alone that I lived in we were plagued by those types of men. The wife not only had to run in and change the remote control, she also had to run in and bring water, snacks, etc. And pick up his smelly socks off the floor. Bring him his slippers. Made. Me. Crazy.

sadly I can relate to this completely,, when read it sounds as bazaar as it was,,my childhood.

Parts of our society still work this way. Times have not changed as much as we like to think!

I remember when there was no channel hopping as there was only one to choose.

changing the channel also meant moving the rabbit ears. Times have not changed too much I can hear my wife now "Did you see the remote?" but I'm always happy to help her find it.

If you don't have any high tech accessories like a wife and kids, one had to rely on low tech like a long stick to change channels. A sad state of affairs.

Oh, how I remember those days. I, too, was the channel changer in my house. Also the antenna mover. Kids these days don't know what they missed out on!

I still have aunts and uncles who operate like this.

With the flat screen TV's today, if you lose the remote you are screwed, blued and tattooed.

Haven't heard that " term" since my childhood! Hahahah! Awe! " Those Where The Days!" Edith xoxoxoxoxo

I know some TVs now don't have the buttons on them anymore. Meaning you're screwed if you lost the remote.

It makes me uncomfortable that today's TVs don't have any knobs or buttons. What happens when the remote breaks? Yikes! This is a fear I have since both of our TVs are modern.

Oh yeah - I remember that behavior from the growing up years. And then after I got married, my (now ex) husband decided that I shouldn't have any access to the joint checking account and often went out of town with the checkbook and debit card. So I opened my own account during one of those out of town trips and that was the beginning of the end. :) #byebye

that was my job..and also to adjust the antenna which had a length of aluminum foil between the two ears..

we only got a colour TV when I was like at the end of primary school and one with the remote controls when I was in high school, so I remember this perfectly. We also only had like two channels on TV for first twenty years of my life.

I thought for sure you were making this up until I started reading the other comments. This is for real??????? WHYYYYY? It's making my face turn red just thinking about boyfriend even considering pulling this b.s.

As a kid in the 70s it was our job to change the channel for your parents. When I told my kids that they stared blankly back at me. The concept of controls on the front of your TV was lost on them.

Guess I'm the odd one out - we didn't have TV in Alaska when I was a kid (it later came to town and the tv reels were shipped up to Alaska on a freighter and were two weeks old when they aired - yet everyone who had a TV watched the 2 weeks old news - even though they had read about it in the newspaper when it happened) and they watched TV from the time it came on at 5 p.m until it went off at 10. And now we don't have a tv in our house either - so I'm not up on the new technology either - and happy to be that way.

I barely watch TV anymore (or the telly as they call it here). Long live the internet.

I was with Vapid Vixen, I thought this was a made up story. How much abuse went on before the Mama skittishly skittered into the room to dutifully change the channel instead of throwing boiling stew (I assume they ate a lot of stew) in the jerk's face.

Oh how we have evolved! I think a man would of felt castrated in the 50s if they weren't "taken" care of. I remember as a little girl my mother did everything at home, including turning the channels because my dad "had worked all day." Thankfully by the time I got married, my husband never had the expectation that I should do something he was capable of doing for himself.

I remember the one with the chord attached...and you could "slide" from channel to channel...
Or...the rotor...which turned the aerial.....Geesh....
Enjoy your week...
Cheers!
Linda :o)

And even if he had a remote in his hand back then, he'd have screamed at his wife: "Come over here and press the Channel changer button!"

Tell us more about past Debra... that short story made my day , seriously...

Yea, we get things way too easy these days, without lifting up our asses...lol

This is the funniest posting yet Debra, laughing so hard, good way to end the day, (12.30am)
Thanks.

For some reason, I just started feeling the urge of writing a story about a man whose brains are sucked out through his eye sockets by a Grendel-like TV monster...

wouldn't work with today's women. I am not allowed to have the remote.
the Ol'Buzzard

Cute story..sad but true, I guess...Love the "shag carpet" bit..I can relate..

Of course, "shag" has a rather different meaning over here in the UK. Mama should of stuck the TV up his butt!

Sad, but I think some families are still like this! Maybe you don't have to change the channel, but when he yells, you drop and go!
Speaking of changing the channels, I kind of miss it! One way of getting exercise! LOL!

Time changes....
And now is the time to change the batteries of my remote controller.

Being a "lady of a certain age", I have seen this same thing take place in our family. Maybe not QUITE as bad as calling someone from another room to change channels...but women so used to wait on men all the time. I remember my father in law AND my dad eating and getting up from the table and leaving their dirty dishes on the table instead of taking them to the sink...a really pet peeve of mine.

Some of these comments remind me of my dad. Smartest person on the planet (taught computer sciences at college) but was consistently calling on the various family members because he couldn't work a microwave or a VCR (yes, I'm that old).

For the record, I had portable t.v.'s with that function.

I loved the Savage Chickens cartoon as is mentioned above with today's TVs when you loose the remote...might as well forget even turning it on cause who knows what happened to the buttons. Apple has it figured out for their own device since I can control the Apple TV with both my iPhone and my iPad.