You know, we take hockey PRETTY seriously here in the Great White North. 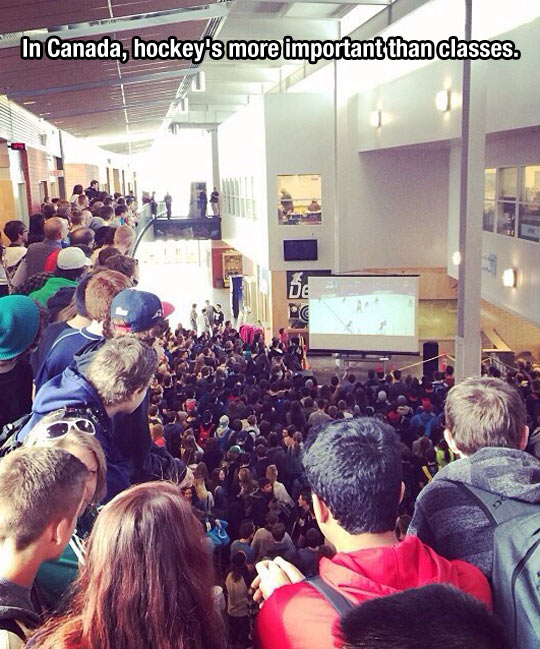 Hockey is not just our national sport, it's also our STATE RELIGION. 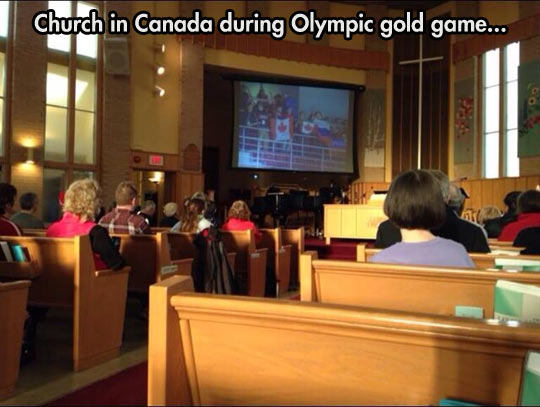 And we know we're NOT alone in our devotion. 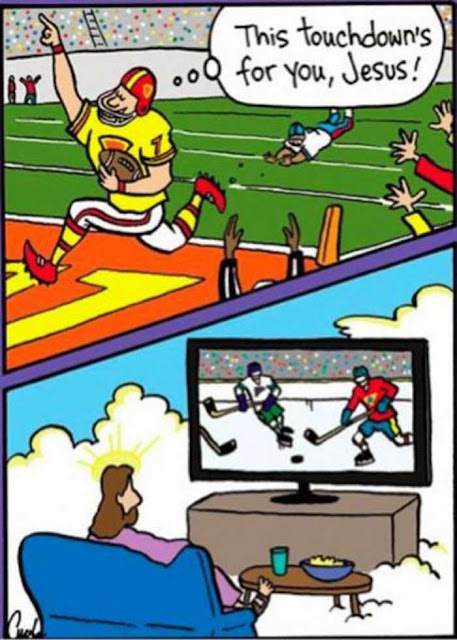 Nobody is REALLY a tough guy in Canada unless he plays hockey. 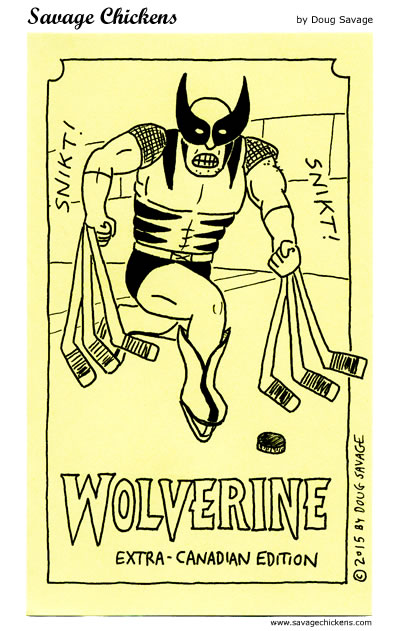 Hockey is a part of all our lives from childhood on up, whether we are players OR viewers. 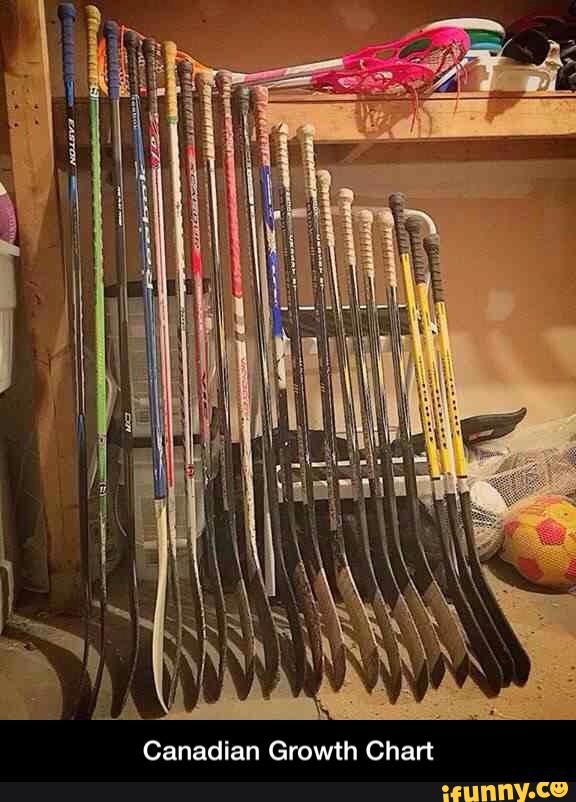 Even SUMMER doesn't put a damper on our enthusiasm. 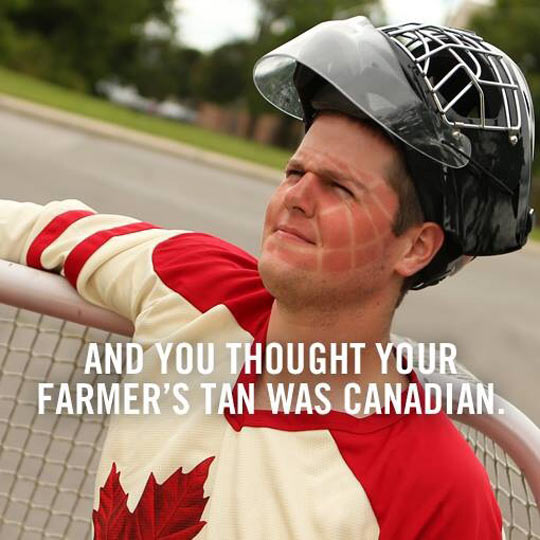 That's why Canadians have their PRIORITIES straight. 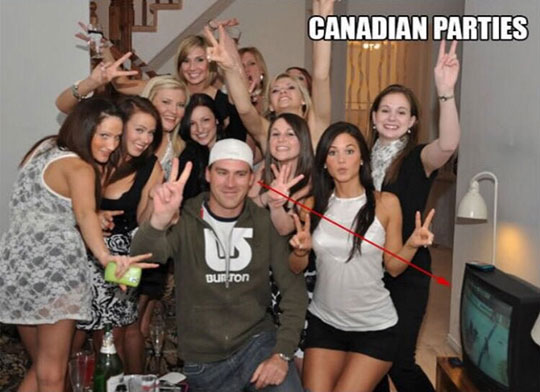 So, when NOT ONE SINGLE CANADIAN TEAM makes it to the NHL playoffs, this is how all of Canada feels --

It's like taking a goddamn PUCK TO THE FACE. (Great Halloween costume, eh?) 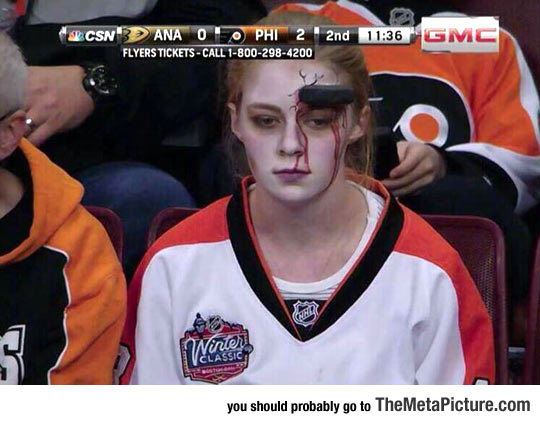 Of course, we will survive this blow. And yes, we'll settle for watching AMERICAN teams vie for the Stanley Cup, secure in knowing that MANY of their top players are Canadians. It's just NOT the same though, no matter what anyone says. *SOB*

NEXT year, the Stanley Cup will come home to Canada again!

And not just to Canada, but to EDMONTON!

I'm a baseball fan here. Played when I was a kid and truthfully, it's the only game I understand. Here's to your team. May they bring the cup home again.
Mary

baseball USED to be the religion here, now it's dumbass football for dumbass idiots.

thanks for the last pix; our flyers lost in the playoffs. next year...

Some of these are amazing, like the church one. I mean, know your clientele, I guess. The growth chart one is cute. The guy with hockey-mask-burn, dude, use an SPF 30 on that mug of yours because the hockey-mask-face-cancer won't be as cute.

I'm not much of a sports guy but even I find it shocking there's no canucks in the playoffs. They really must all be playing for the yank teams. Traitors.

Well! I have never seen a TV screen in a church before.

We stole some of your best players! It cracks me up how passionate people are about sports. I don't think any of our local teams actually have players born and raised in the region which is a bit of a spoiler!

I love how our football players get religious and pray to God before, during, and after games. THERE'S NO POINT. There's no point in praying for anything, even if you're are religious if you believe in the divine plan.

I think some of them honestly think it helps them win games. Like how being Christian helped European nations win the Crusades...oh wait..oops.

Hockey. Now that is a sport right?

WOW! The first 15 teams in the NHL are all American. So "splain it to my LUCY. Wha happon?" That is really sad.

never watched a single game of hockey in my life... which is why I will never get Canadian citizenship :(

Funny
Enjoyed this. Thank you for sharing.

I am not much of a sport fan, however I wish your team the very best!

Great makeup on that fan eh. Chicago Blackhawks didn't make it either eh.

I'm Pretty sure that the Blackhawks will win it next year :) We are a two-sport house Baseball and Hockey my girls love hockey more.

yes next year it will be ours!

I'm sorry, Canada. I know nothing about hockey, but I'm sure you deserved to win.

Love the hockey mask tan, the big screen church TV, and the girl with the puck face!
Great photos from a truly devoted fan!

Love the church one that's a church I might consider going to.


my father was huge fan of hockey ,and rest of us were fan of cricket ,there were long hot discussions for the favor of each game and team then,thank you for amazing sharing dear

Keeping my fingers crossed for next year then... Maybe Wolverine will play!

Well that's certainly devotion for you.
I'm so glad you said that was a Halloween costume because I nearly fainted when I first saw it!
That little quivering chin certainly sums it all up. Yep, there's always next year... although I know that doesn't help now!
We are more for Football... or Footy over this side of the pond.
Have a wonderful week xoxo

May your dreams come true!! Best of luck!!

Kind of depressing, after the way the Habs began the season.

I suspect foul play and use of steroids.

Back in May, 2011, I was going through customs at Vancouver airport. The customs guy asked me why I was staying for five weeks. I told him I was hoping to see some hockey history. He said, "You'd better get going eh, the Canucks play Nashville in an hour's time. So, I rushed through customs and my parents got me to their place in time to watch the game, eh.

Yes, keeping fingers crossed for next year! Great post Debra! Love the puck in the head!!
(Debra, I hope none of your family or friends are affected by the fires!!!)

(some) Americans love hockey too!

Not much hockey is played in Australia, we are a AFL football, NRL football, soccer, tennis, swimming nation....crazy for these sports.
Sorry for your loss. xxxx

Ah, an Oiler's fan, I see. I used to support the Ottawa Senators cause I am a sucker for punishment. Anyway, I do hope Canada gets to bring home the Stanley Cup this year. In the meantime, just have to keep watching the tape of Canada berating the USA in the last Olympics (the women's team too).


...just putcher love on the florida bolts, they have the most canuck players ;)


...in case you're wondering, that's the tampa bay lightning

Hockey is hockey and will always be a 5th tier sport here in the US.

Having said that, it's kind of sad that no Canadian team is in.

Obviously Sweden is also crazy about hockey, but nowadays soccer most often surpasses it.

I used to go to hockey games a lot when the Flames were in Atlanta and then we lost them to Calgary. Grrr. So then we had a long, dry spell, but got the Trashers! And then they moved to Winnipeg. :( At least I got to one Trashers game while they were in ATL (therein lies the problem - lack of support from wishy washy fans.) :)

I do love me some hockey - I hope Edmondton wins the Stanley Cup next year - I'll pull for them.

Okay, I flippin' love the church one. That's brilliant.

I think by now you know I love me some baseball. I don't really know much about hockey.