While the eyes of the world are riveted on the USA, what's going on up here in the Great White North?

It took a group of neighbours in Calgary 3 years to save 600 milk cartons so they could build this multicoloured ice igloo. Even local teenagers helped in the teamwork by hauling wheelbarrows of snow for the mortar. Like good Canadians, the neighbours recycled the milk cartons afterwards and bought a bottle of hooch with the refund money to make hot toddies for the igloo's housewarming party. 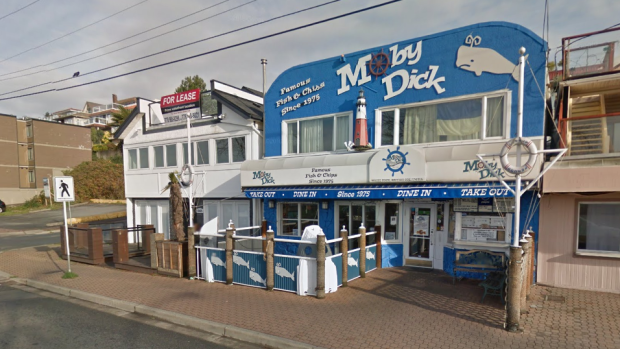 An ongoing Vancouver lawsuit concerns a condo corporation that is refusing to allow a local fish 'n chips shop named after Moby Dick to operate in the building's restaurant space. The condo board objects to the "offensive word" Dick in the restaurant's name, which it says will  harm the building's image and lower property values. Guess they don't know that the great white whale's moniker is really based on the short form of "Richard," eh? What a buncha dicks! 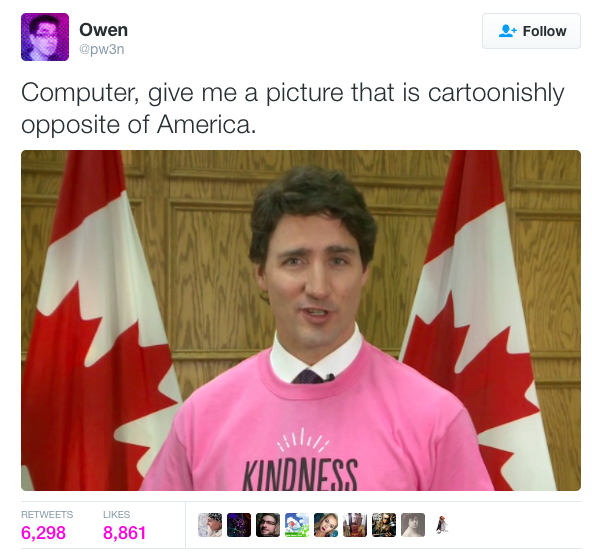 That's it for now, everyone. Keep your stick on the ice!

wish I could have one night with your handsome PM.

didja hear about the canadians wanting to join us in our saturday protest and were denied entry to my country? fingerprinted and everything. the thugs are out there, so beware!

Ha ha ha ha ha!
What if the restaurant renamed itself "Moby Vaginas?" I mean, there's a sporting goods store in the states called simply "Dick's." Yeah, they're so bold to make it a possessive. Dick's sells balls! And there's one across the street from an elementary school.

You're so lucky to have an awesome PM. Wish we had somebody like that...instead we get an orange idiot.

But if I keep my stick on the ice I can't hit people with it. I thought that was the point of hockey.

I heard about Moby Dick on the radio and thought it was a joke. Not so much.

And turning in milk cartoons for hooch? I'm in!

Justin. ::::sigh hot smart compassionate :::: we had one of those for a time.

and now they have a cancerous igloo :O Mamy thinks milk cartons are causing cancer.

I love them..the igloo is great...and I feel sad that so many people now think we're a bunch of racists and not kind..that's really not us..as was shown by the march's around the states..and helping..the rest of the world.

I rarely disagree with Jackiesue; but, yes, this is the land of racism and lunacy. Just look at our President. If I were younger I'd move to Newfoundland.
the Ol'Buzzard

You guys hit the jackpot with your wonderful PM. Lucky Canadians!

If I'd run across the Moby Dick incident, I would have truly believed it's a joke. WTF??

And for the first time in a very, very long time, I'm proud of the PM that is representing us.

O, oops - No, wait. He's an Aussie; we really don't do the umerrikun P.T.Barnum (there's a sucker born every minute) sort of politics ... heh.
(um, have forgotten how to do the 'ahref' sort of thingo )

My face lit with a big smile when I saw that opposite photo. Give your kind, delicious man a kiss for me when you get a chance, Deb. Thank you.

Love the igloo, what a wonderful art installation and fun too.
I'm sorry that the world is preoccupied with the Cheetohead we have for president. Keep in mind world....he did not win the popular vote, he is only a temporary employee of the citizens of the United States and not all of us are racist assholes....some of us a cuddly and have designs on that hunk you have running your country. Just sayin', wink.

Thank you for the laughs! I thought people were just uptight in the US about things like the name Dick. The world needs to lighten up and smile more.

HAHAHAAA! That raised my spirits. Thanks darlin.

Since I'm a kind person, I don't get the second picture but the first one, that's good stuff. Somehow, Moby Richard, just doesn't have the same ring to it.

I heard about that Moby Dick issue (BTW I wrote a long report on that book in high school). Yeah change it to Moby Sperm Whale.

I just saw an old Danish proverb that "a child of love has many names".
How about Beef Bazooka's?

I just looove your country!!!

The DICK one made me laugh out loud...when people start finding fault with stuff like that, it's waaay passed time to GET A LIFE.

The sign on the front of Moby Dick's says it's been open since 1975. 42 years and NOW someones complaining?

Hell I know of at least three bars here named Moby Dick in the US. The one I went to the most . we would always say, " I'll meet you at the dick" We laugh.

You'll got the perfect PM

and we got the giant POS

To tell the truth - my eyes were on Trudeau .. what a handsome man he is and being a PM at his still young age ..mm...well, what else did you say about Canada?:)lol

thank you for glimpse of Canada's happenings friend as in new here we are so tired of Trump show in news and i don't feel comfortable to look at him some kind of negative energy flows i don't no what it is .

i adore this wonderful result of recycling !

Glad you are happy with your PM .

I read about that restaurant controversy. This is a prime example as to why political correctness and ignorance have such a intimate relationship.

Oh, you guys. I L.O.V.E. the igloo! LOVE it! I ran into the same problem with PussyHats. Good grief. Let's grow UP people! Of course, I do snicker when someone says "underpants", but that can't be helped. It's my Monty Python obsession. Yes. Your Prime Minister is the polar opposite of our whatever. I'm not using the "P" word - ever - in connection with that bozo. He's not mine.

Justin all the way!

Love the igloo..The restaurant issue is ridiculous..I worry how we are perceived by the rest of the world..Probably the same way most of us see us!! That has to make us more vulnerable..Love your PM..Our system just doesn't work..My husband always said "when I an king"...

Have these people seriously never heard of Moby Dick? Down here it's considered the greatest novel ever written. (I would disagree, but it's got to be in the top percentile of great novels.)
And even if they haven't, Dick is still a fairly common name. Dick Clark, Dick Cavett, Dick Van Dyke, Dick Dale, Dick Smothers, etc.

That was some right good, Debra!

Too funny, Debra! The Moby Dick one is unbelievable. What a bunch of dicks for sure!

I swear there must just be a gazillion people in the world looking for ways to be offended. Every Tom, Dick and Harry is out there protesting some "imagined" wrong. There really are a lot of Dicks out there.

One of my most dear friends in the world lives in Canada - we email every day. She HATES your PM (but likes him more than our new President.) :)

Shoot, I wrote a nice long post and it didn't show up!!! Let's start again!
I love that igloo! Brilliant! I can't believe that about the restaurant! I agree, what a buncha of dicks!
Did you watch our PM this week out west? I felt so bad for him! He tells the truth, he gets bashed. He tries to do good, he gets bashed! I honestly feel he cares so much for Canada! You can feel it! My mom loved his father and loves him too! I feel he is truly trying his best!!! Big Hugs Debra :)

I've known a few blokes called Dick. It's a name! It's like objecting to the name Fanny, some people have too much time on their hands.