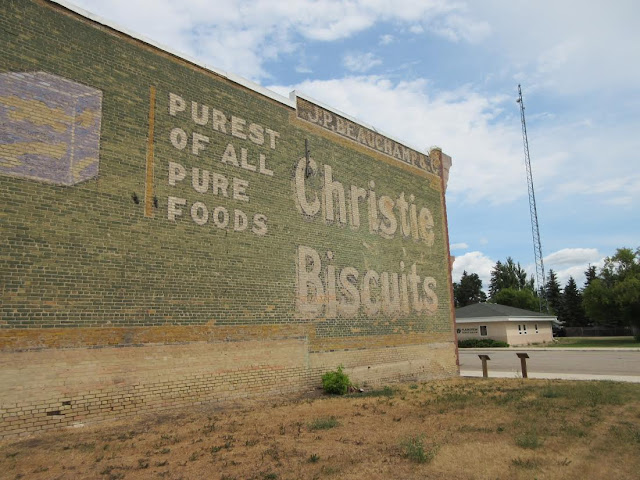 Continuing on from Tuesday's post, here's a few family photos taken over the years that feature the Christie Biscuits ad loitering in the background:

This one probably dates from World War II or very shortly thereafter. That's my Mom leaning against the car, taking a break from waitressing or cooking in the hotel, judging from how she's dressed. She was the chambermaid too! 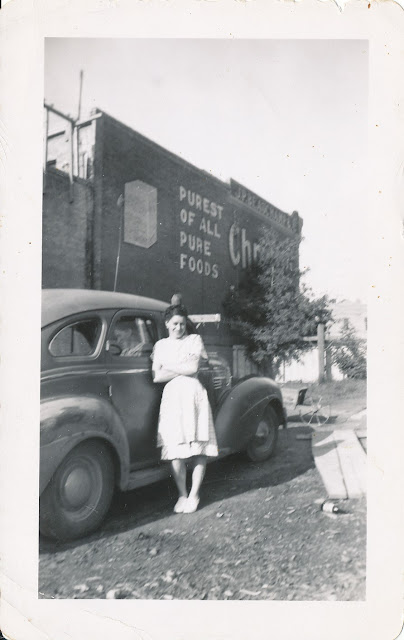 This is my grandma and me in her flower garden in the mid-1960s. You can just see the "u" and "i" of "Biscuits" peeking out from behind some trees that were growing there at the time. 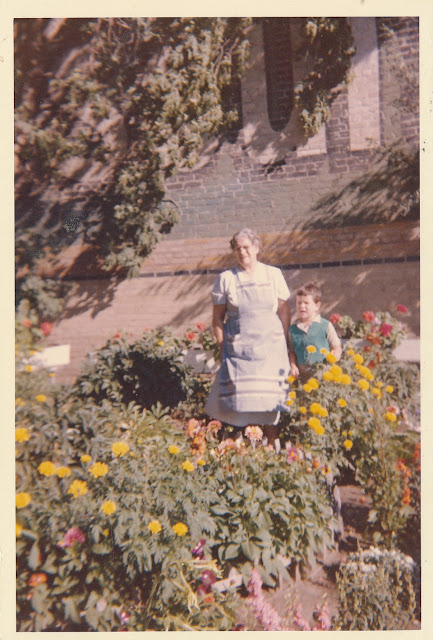 And finally, here's a great autumnal shot of the ad, probably taken in the early 1980s. That's my grandpa in the red baseball cap, sitting in the garden amidst the empty flower boxes. 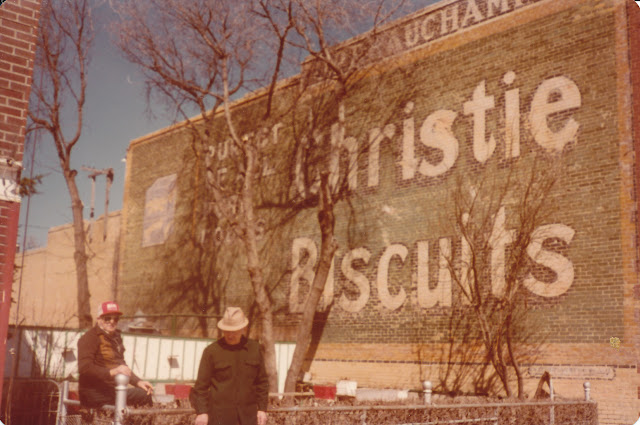 During my brief stopover in Saskatchewan this summer, I was so glad to see that Christie Biscuits still faithfully abides all these many years later, like a dear old family friend.

nice family photos. so what ARE christie biscuits?

These are wonderful. It's amazing how that sign has held up. I remember a Wanamaker's sign painted high up on a building in Manhattan. It was still there 20 years or so ago. It made me smile to see it and it didn't even have the sweet family memories connected to it. I have a feeling it's gone now. (Can't even remember where it was anymore!)

@ anne marie in philly -- I assume that the sign refers to Christie arrowroot biscuits, which were often given to teething babies in the old days and which were also considered a health food because of the arrowroot flour.

Precious photos and memories, Debra. Thank you for sharing!

With how long that mural has been there I'll be very disappointed if I ever got to eat Christie Biscuits and they weren't all that good.

Love looking at the photos! And those flowers were gorgeous! I know what you mean about the sign/building being like an old friend. There's something about those painted signs/ads on buildings...

Wow that sign is huge judging from the scale you and your Grandmother provide. I like that picture of your mom.

OMG Debs, you look like a boy on that photo, who gave you that haircut?
Why was your momma serving in the hotel, wasn't she supposed to be the owner's grandkid? :) But then again my grandma made me toil on her fields and farms with other slaves so I guess I shouldn't be asking :)

would be difficult to see it change.

I love these old photograph's amazing family history too.

I do like your sign. I live in Akron, an old industrial town that has been refurbished, not rebuilt. There are several such ads that come and go, but, if course, I cannot remember what they are or where they were.

Funny how things change around something like that building sign throughout the years. Wonder if it will still be there in another 20 years.

Great photos! Your grandmother's garden was fantastic! I don't know how she had the time to raise such an abundance of flowers while running a hotel.

What wonderful shots! And nice to know the sign still remains. I am loving your sexy bowl hair style.

@ Dezzy -- Yes, I was a pint-sized butch in those days! My grandparents expected their kids to work in the hotel. My Mom, and later two of her step-siblings, all worked hard in the family business.

@ mistress maddie -- hey, hey, HEY! I'll have you know that it was a PIXIE cut! All the rage back then, lol.

I'm glad that the sign is still there for you. As an Army brat I spent most of my childhood moving from place to place. But my grandmothers houses were an anchor for me. It seems to me that the town they lived in is part of the fabric that I call my soul.

I would say that the sign is a part of your family. I doubt any other family has as many pictures of it!

Love these photos! Ghost signs are so interesting anyway but to have a family connection to that one is awesome!

Great pictures. Reminders that time passes so quickly...and the "things" we love are so temporary.

Great vintage family photos and memories! The old car your mom is leaning against reminds me of my dad's 1940 Dodge. He had it for many years while I was growing up but has since sold it. Old cars like that are so neat to see today.

love the pictures and especially the one of you..what a cutie pie..do they still make the Christi's Biscuits?

I absolutely love stories like this and the history behind them all. How neat that it is still there after all these years! You should get a recent picture in front of it to share with us :-) If I was rich I think I'd restore every old home and business I could! These bigger chains just arent' the same... thank you for sharing this! Have a wonderful weekend and thank you so much for your kind words on my latest post.

@ Jackiesue -- Awww, thanks YDG! Yes, Christie biscuits and cookies are still on the shelves! But now Christie is owned by the American multinational Nabisco. Both brand names appear on all the packages here in Canada.

Ah, a pixie cut, to which I was also subjected. I was a homely child.

I tried commenting on the first entry but somehow couldn't - not sure what was happening.

That brought back so many memories of taking the old Queen streetcar from the Humber loop in Toronto heading downtown. You'd pass the huge expanse of the Christie factory proudly stating it was the home of Christie's Biscuits.

What wonderful photos... and memories.

Thanks for sharing your precious memories and beautiful photos.

With how long that mural has been there I'll be very disappointed if I ever got to eat Christie Biscuits and they weren't all that good.

Oh what fun to see your old family photos! I love when blogging pals share them.

Your mom was a stunner and you, my dear, the the cutest little thing. It's funny (or maybe not), but I can't look at this pictures without smiling wide... and thinking of my own childhood village. Which is weird (or maybe not) since they don't look anything alike.

What treasures, these photos are. The one with you and grandma brought an instant smile to my face.

It was my grandmother's birthday yesterday so for me, this post hits home, garden and all. I love it. Thank you for sharing.

Lovely vintage photos and a very distinct wall withstanding the years. Warm greetings to you.

Deb, this is a priceless post!! Your mom is so beautiful! And, you are so cute! I love the picture of you with Grandma in the garden! I just bought my mom some arrowroot cookies today!

Well you know I love anything vintage, so this is a treat! Your posts are so heartfelt and I'm sure you treasure those great photos and memories! Thanks for introducing us to "Christie Biscuits"!

Some wonderful photos. Thanks for sharing them.

Hey Deb, I wanted to let you know, my mom thought your picture was cute too! She would like to know where in Saskatchewan this is? Or do you mind giving that information?

AWWW, I just simply LOVE this kind of post.
so so interesting...and just look at your cute little mama...and you and your Grandma and there's your Grandad...love it


i am so glad that you shared these precious photos!

your family looks so lovely .
loved the simple and adorable look of your mom and your grand parents.
you look like a fine disciplined boy instead of naughty girl you sound through your writings :)

That's so neat that you have those pics. Your mom was a hard worker! Love the shot of you and your grandma.

You should get your photo taken outside the sign now to add to your collection.