This seems to have been my summer for poking around various small prairie towns in Manitoba, Saskatchewan and Alberta. I'll post about some of them over the course of this month.

In June, I had occasion to drive a couple of hours northeast of Edmonton to the region known in Alberta as "Kalyna Country." This is rolling, fertile farm country where the Parkland area of the prairies meets the Boreal Forest. Historically, the area was settled a little over a hundred years ago by Ukrainian immigrants, who are still the dominant cultural group in the area. Their enduring presence can be seen most strikingly in many beautiful small Orthodox Christian churches, like these two in Smoky Lake with their silver and copper onion domes: 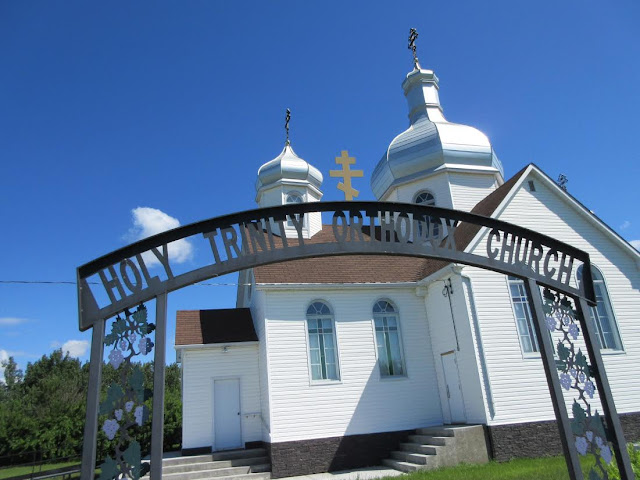 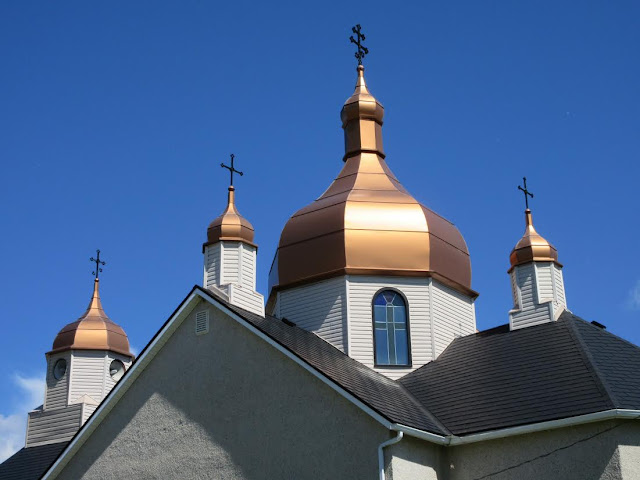 "Kalyna" means "highbush cranberries" in Ukrainian, so I assume they must be plentiful in this region (or were plentiful when the settlers first arrived). However, pumpkins are clearly KING in Smoky Lake nowadays, judging from these giant pumpkin sculptures in Pumpkin Park. 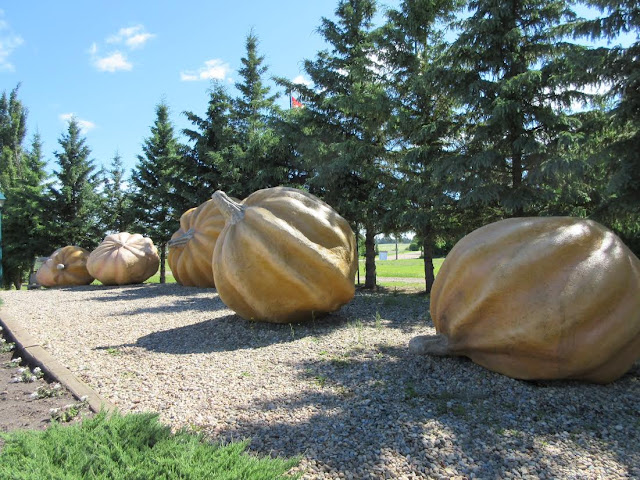 An appropriate image for Halloween month, wouldn't you say?

I am no fan of what goers on inside most churches, but I do love a church building. This one is beautiful.

The churches with their Orthodox spires are beautiful.

Very appropriate ornamentory. Probably not a word. Might be in Ukrainian.

Those churches are beautiful! And the Pumpkins! Oh My! I want one! How cool that would be to have in the yard.....

They sure look slavic in design

How timely were these pictures?

The domes on the churches are gorgeous! I love stuff like this. One of the reasons I loved living overseas. So much beautiful architecture.

Enjoy the rest of your week!
Elsie

Nifty fact about the old settlers!
Those pumpkin sculptures are rather large. Wonder if they grow huge pumpkins. Or maybe just a Halloween decoration?

The gigantic pumpkin sculptures are very fun! A most appropriate accent for a place called Pumpkin Park.

Wow! I have a wonderful old friend in San Diego named Kalyna. She's not Ukrainian. I wonder if she knows she's a highbush cranberry. She's very tall.

OMG! Those giant pumpkins!!! Lovely onion tops! Reminds me of the church on Main just past Hespeler/Redwood.

When I traveled throughout the prairies I was amazed by all the churches like the ones your photographed. Though beautiful, I felt angry at the expense put into them.

The pumpkins however, I love!

The churches remind me of New Britain, Connecticut, where I grew up. Every European and eastern European ethnicity has its own church. Now the pumpkins almost look like they're sculpted out of concrete or fiberglass. I prefer the pie pumpkins!

P.S. forgive me; our internet here is SO SLOW I cannot always open a page...so don't read as often. It takes me HOURS to post anything on my own blog.

Nice to see you back. Very beautiful looking churches I have to say, but they look tiny. So why are there so many crosses on the roof?

@ LL Cool Joe -- That's just how the Orthodox church does things. I do know that, traditionally, an Orthodox church has a large central onion dome representing Christ, surrounded by four smaller onion domes representing the four evangelists Matthew, Mark, Luke and John. However, small churches will sometimes not have all (or any) of the four smaller ones due to lack of space or money.

I sometimes like to sing Kalin, kalin, kalinka maya.... famous Russian song :) When nobody hears me, of course.... I have a whole Russian repertoire, naturally

were you alone on this trip or did your rare one accompany you on the adventure?

@ anne marie in philly -- I was by myself on this little day trip. My Rare One was in Manitoba at the time, visiting her family.

These road trips are often the best! You discover some real gems.

I have to tell you Debra, there are so many places you have been to in Canada, where I have never been. I'm starting to write them down, so maybe I will go some day. I hope! Love the churches and those pumpkins are so cool!

Beautiful photos - and those pumpkins - they are amazing. Wonder what they are made of.

Wow! At first glance I thought the pumpkins were giant ones that some people like to grow in quest of the biggest. There must be a story behind Pumpkin Park. Have a good one, my friend!

I do like the way 'settlers' impart bits of their culture and architecture into the places where they move to live.
I can't believe that it is pumkin time already, how the year is racing by!

I'm glad you had such an interesting escapade. Whenever you post pictures of thereabouts, I feel more and more connected with my roots. Thank you kindly.

I don't know why but I find it very interesting that there's a town in Canada that was settled by Ukrainians. And that there's an actual pumpkin park complete with pumpkin sculptures.

i like the pumpkins. Lots of Ukrainians in T.Bay, also.

Do they hold any special events in Pumpkin Park for Halloween?

Beautiful churches..love the copper domes...I assume those pumpkins are there all the time?? Very timely...

Neat spires on those churches. Funny I never thought of Canada as having a Russian influence. Yes, I have been saving all those brains cells!

MORE PUMPKIN PARK INFO -- To answer as many questions as I can, here's some more info on Smoky Lake's Pumpkin Park. The 7 giant pumpkin sculptures are there permanently year around. I'm not sure what they're made of, but it's probably concrete or fibreglass. For over 20 years, Smoky Lake has held a Pumpkin Festival and Weigh-off in early October. People enter huge, huge pumpkins that they have grown. A couple of years ago, festival organizers hoisted a huge pumpkin on a crane and let it smash a car. That was a real crowd pleaser!

Looks like it was a perfect day for sightseeing! Thanks for sharing the view. Also, I would have loved to see a pumpkin squash a car! Lol.

Pumpkins everywhere. When I was a kid all we had was hollowed out turnips. Don't think I saw a real pumpkin until I was 20.

thank you for sharing wonderful pics from your road trip dear!

Those pumpkins are awesome!

Wow those are some pumpkins! love those onion domes

you sure those punkin' aren't from Texas?