In June when I drove up to Kalyna Country, one of the small towns I stopped in was Vilna, Alberta. The town has done a beautiful job of preserving and restoring its old pool hall and barbershop. I simply HAD to stop and see it because, you know, I DO love playing pool! 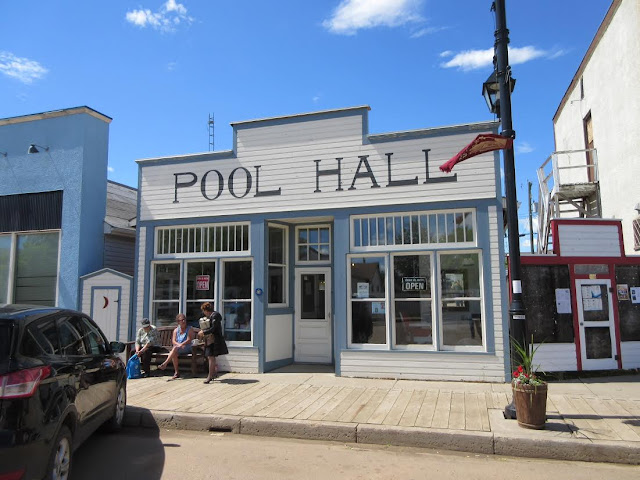 Built in 1921, the structure also contained the town's barbershop at the front of the building. These counters and cabinets are all original and now display various artefacts of past times. 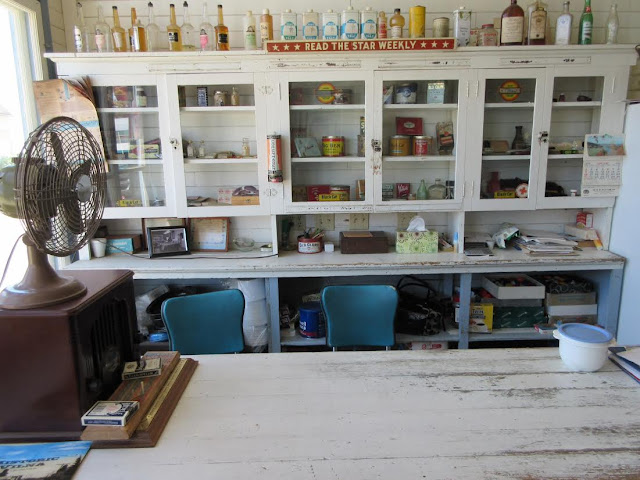 A restored barber's chair sits facing a small sink and mirrors in an alcove near the wood-burning stove which heated the building in the winter. 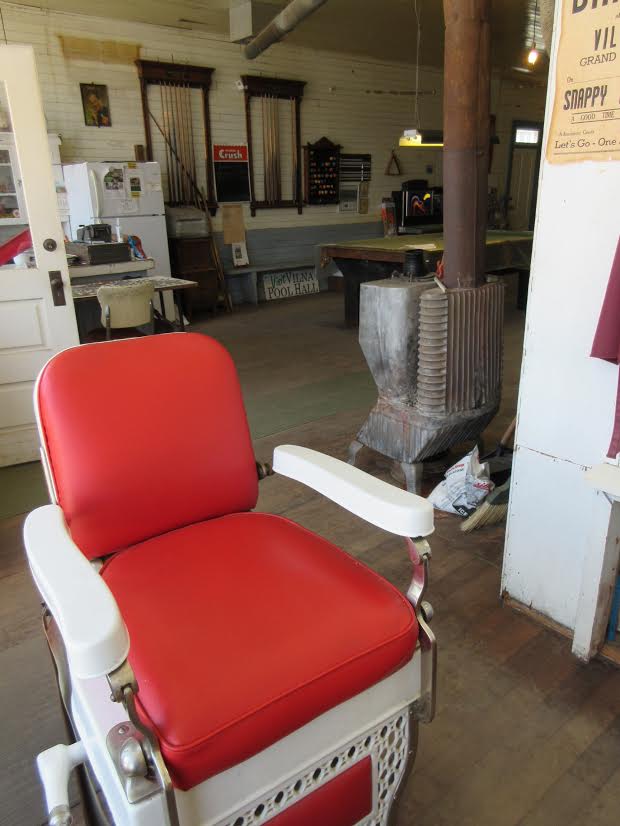 The pool hall still features its four original turn-of-the-century pool tables -- the two large ones at the back for snooker and the two smaller ones at the front for billiards. When not in use, the tables are covered so as to keep the felt in good condition. The ceiling and walls are the original wooden lathe construction. The building also has its original oiled wood floors (oiled periodically to keep the dust down). 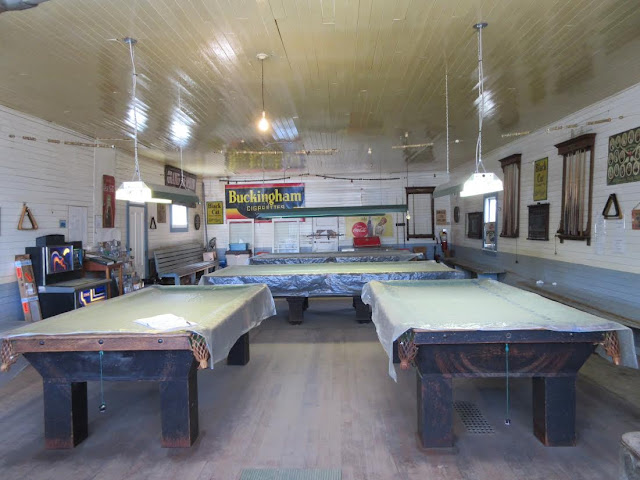 The pool hall and barbershop were, of course, an exclusively male bastion for much of its history. No women allowed! 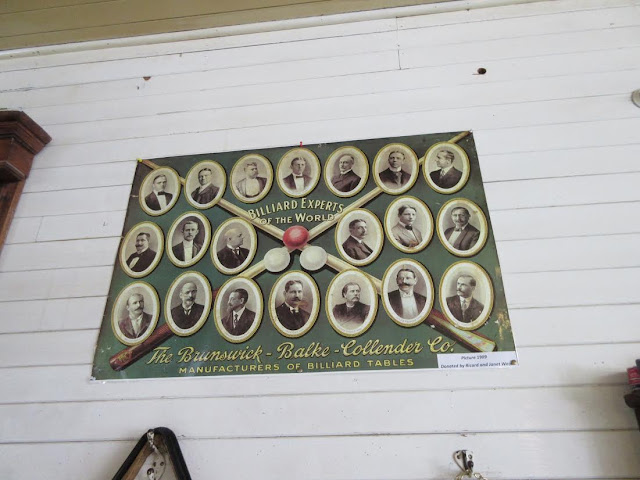 There were lots of fights in the pool hall. "The walls were red with blood" from time to time and several cues were broken. Women never entered the pool hall in the early days, as it was "no place for a lady".

However, ladies were allowed to enter an associated dance hall in which live bands apparently played "snappy music" -- but it soon burned down after some riotous event and was not rebuilt. 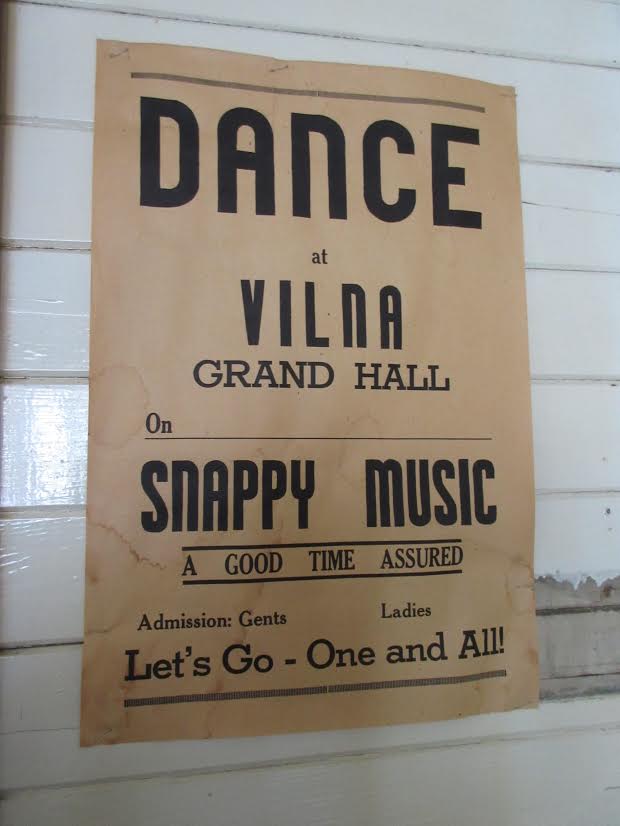 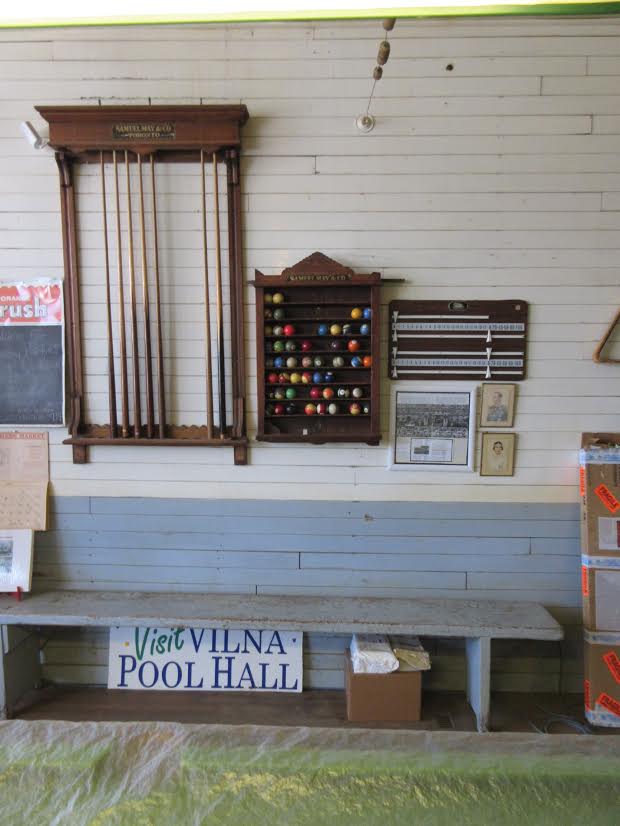 You can see the cabinet's antique veneer in this (sorry, kinda crooked) close-up, plus the old Boston balls mixed in with the newer ones. The old balls have larger numbers, circled in black. 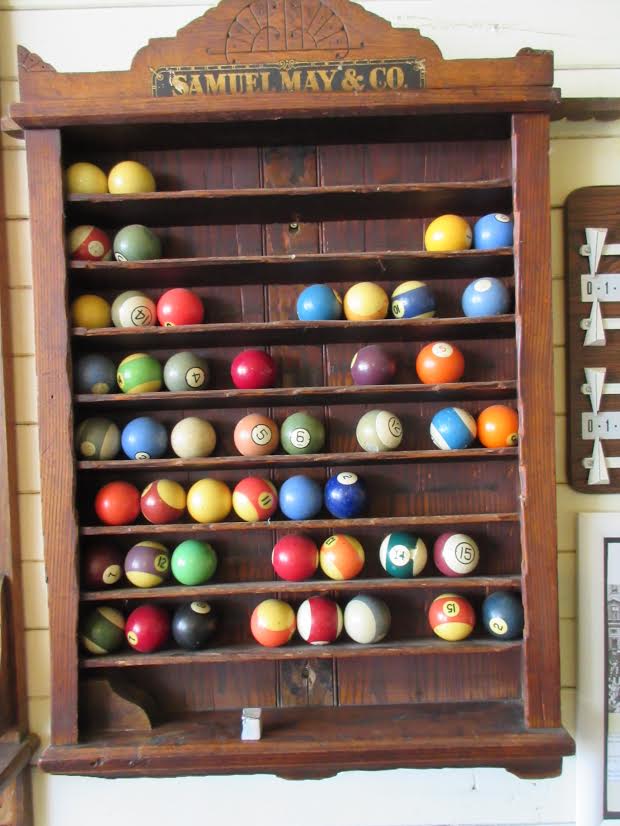 Unfortunately, My Rare One was in Manitoba at the time so she was not on this trip with me, or we definitely would have rented a table to play a couple of games! Because yes, this is STILL a FUNCTIONING pool hall, not just a recognized historical attraction!

A great restoration. Can't believe you can still play there. Vilma looks charming. I've never been to Alberta.

What a treasure! Thanks for sharing! I love to see such places preserved!

How cool is this!?! The restoration is so well done. It is as if it was built yesterday. And to still be functioning. Very cool! I bet the whole town was interesting to see. :o)

I used to spend a large amount of my youth in the snooker clubs of Sheffield. Sadly most have gone. Barbershops are also something in my past now I have no use for them.

Love the history. I'm a sucker for a bit of history.

How amazing to see these restorations. That is awesome that you can still use these tables today. I would love to go back in time and visit that dance hall. The music and fashion must have been quite "snappy" whatever that mean. :)

What an awesome place to visit! It feels like stepping back in time.

Oh wow, I could just see my grandfather playing while looking at your pictures what a cool place.

I would love to have that barber's chair in my home. Wow, it looks great.

"Snappy music" ? I wonder what that was? Not 2Pac I assume?

What a fun visit and I love those 'oldtime' pool halls.
We once restored an old building downtown and one of our rentals was a billiards hall. We used to play for free and our little guy (who was about 7 at the time) became a very good pool player. I haven't played in years and, truth be told, I was not all that good when I did play. lol

Remind me to never play pool with you. Your probably a pool shark.

Hi Debra :) Those photos are so neat!! I love seeing old towns and buildings and it's wonderful that they preserve the history like that. So you're a shark? ;)...what you said about "no place for a lady" kind of made me giggle because all I could think of was Mae West in some of her movies...here in Quebec there are STILL old taverns with the sign "Bienvenu aux dames", lol. But of course when you walk in, there are Playdude centerfolds all over the walls, they still resist the lady-folk!

Snappy music. I love the way they made signs in those days. So quaint.

What a neat trip! The pool hall in my home town used to be men only - I wonder if it still is? (I wouldn't want to go in there anyway because of the cigarette smoke.) :) But they made a mean chili dog! We used to get guys to go in there and get them for us.

I love old places that have been preserved or restored. That barber's chair is great. I want to travel with you.

That is a great little building and so lovely that they have restored it and kept the vintage feel.

Love it! Just the kinda place I like, I will have to get up there someday!

What a cool post! My dad would love this place. He built a pool table when he was young. It was in our rec room for many years until my mom and he downsized. I was always a horrible player.

"Trouble with a capital T and that rhymes with P and that stands for POOL!

GREAT place, thanks for showing us!

Nope Kay G. that was my first thought too! What a great job of restoration/preservation. Thanks for the photo trip!

sounds like it wasn't for men either but for animals :)

It's incredible that it's so well preserved. I'd love to take a visit there just to have a look around.

What an awesome find, Debra! Snappy music, huh? How did those women ever survive it? haha

Enjoy the rest of your week!
Elsie

What a great find! I love that - 'burned down after some riotous event'...must have been the influence of the snappy music. I come from a family of pool sharks on my father's side of the family. I made most of my spending money in college as a pool hustler.

I'm happy that the restoration included washing the blood off the walls!

Thank you for the very interesting travel tidbit. Rural Alberta is not a place that I have spent any time, so it's interesting to see second hand.

You brought me a warmhearted image of my Grandpa Isaac, enjoying these manly hubs. Thank you, Debra.

I adore those glass fronted cupboards ..... you are now on my blog line .....too late too x

That would be a fun place to play a few rounds of pool.

This is so cool! I love how they have kept the places "original"! The house I was born in, we had a pool table. Use to play with my brothers all the time! Something I miss! Big Hugs!

Now I have to see this.

hope your friend would joined you later in your trip

what a cool place! My dad taught me how to play pool when I was young. I wasn't tall enough so he would stand me on one of the old milk boxes so I could reach the table. We taught my youngest to play pool on one of trips last year ... looks like she's got it in her blood :)

I love it when old buildings are saved. The antiques/collectibles are really nice. I never was a pool player. I think it is that hand to eye thing. In my case I might as well shut my eyes 'cause I don't do much better with them open. LOL.

I looooooove this so much..makes me remember when me and asshole #2 drove from Portland to Alaska in 1968..on non existent roads in a lot of places.We stopped to have a beer and they said I would have to sit on the women's side and Bill would go in on the guys side..I of course said 'fuckthat' and went in with Bill ..there were about 5 guys in there and you would have thought I was nekkid..I sat at the bar and drank a beer with the asshole and no one said anything or did anything..but you could tell they were pissed..when we were going out the door to leave ..I turned around and said "I'm from Texas, no one tells me where I can drink beer."...ha

What a fun post. The restored pool hall is so cool. I'm terrible at pool, but it would be fun to play in such an historic spot. Too bad that your Rare One one wasn't with you.