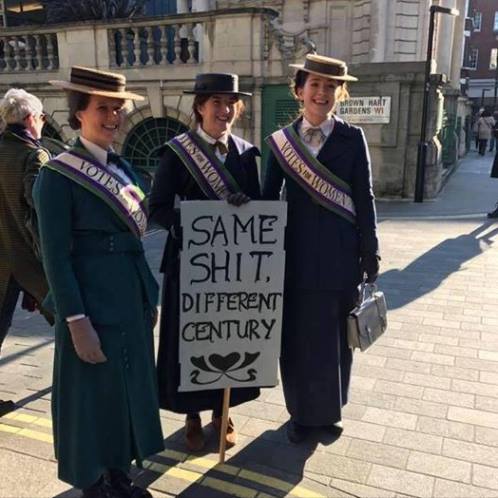 I've been a feminist since 1970 when I was 13 years old and first heard that such a concept existed. I've tried to live my life according to feminist principles and have no regrets for doing so. Feminism made possible the life I wanted and needed.

Since I also consider myself a freethinker, though, I don't necessarily agree with every single feminist stance. Some ideas are too extremist or simply not feasible -- for example, I've never subscribed to lesbian-feminist separatism and I reject the sex negativity underlying a lot of second wave feminism. I also oppose the transphobia tearing apart the women's spirituality movement today.

But I have never stopped openly calling myself a feminist, no matter how negatively distorted a picture of feminism is painted by supremacist opponents and the media. To me, feminism simply means the conviction that men and women are equal and should be treated so. 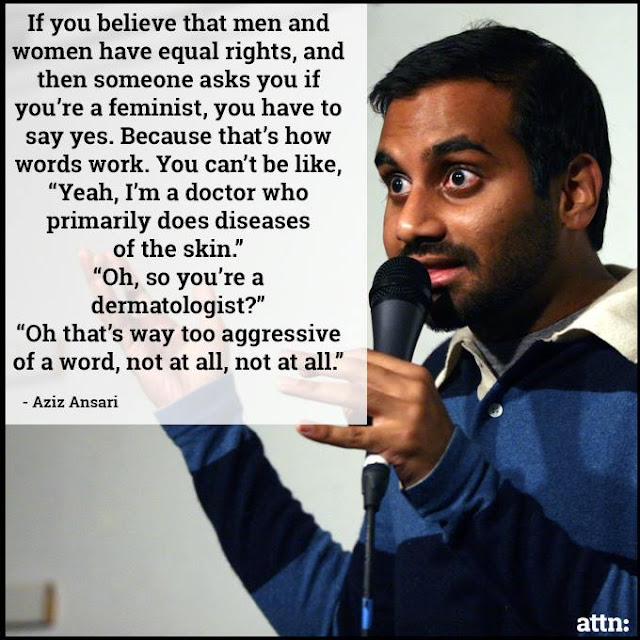 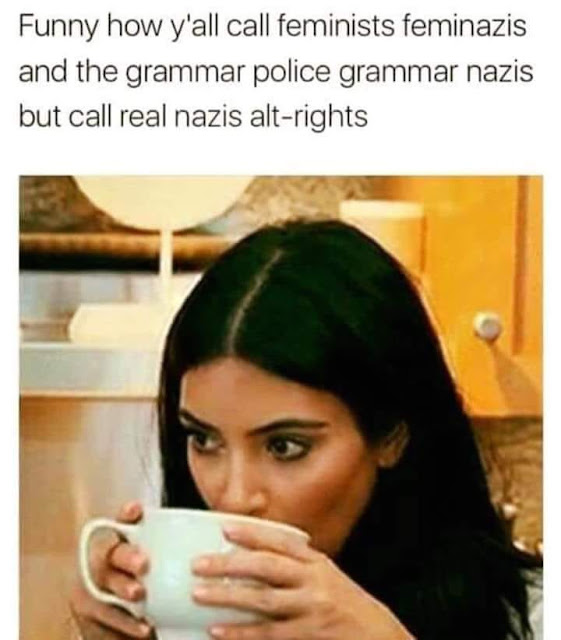 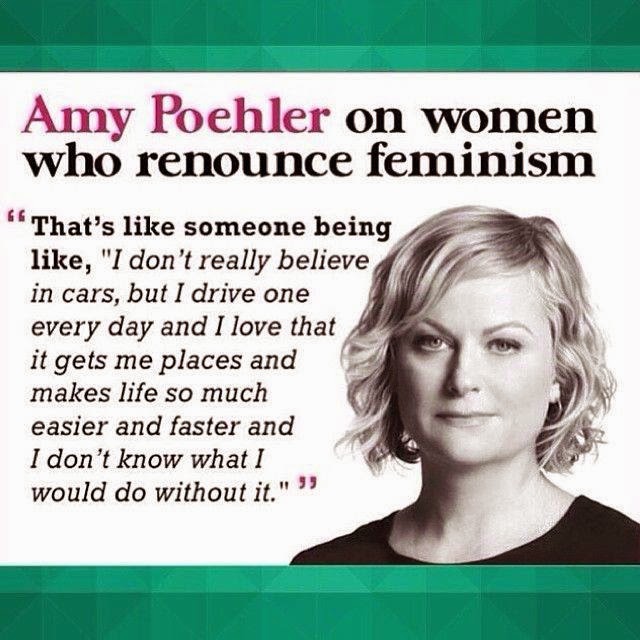 But if a new word MUST be chosen, I would agree with THIS substitute, LOL! 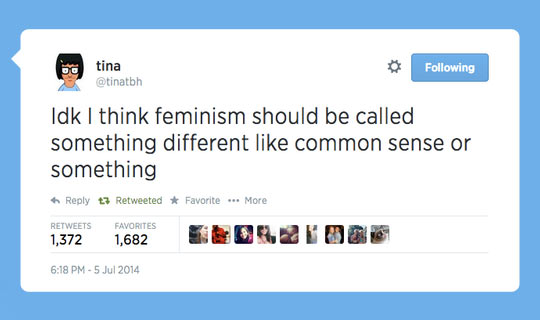 So Happy International Women's Day, everyone! And remember -- onwards and upwards! Because the struggle is far from being over yet. 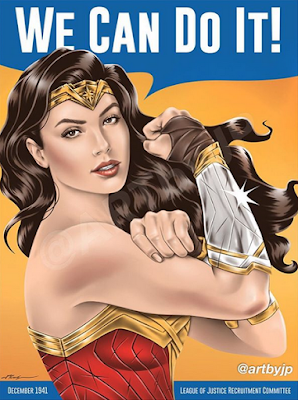 Ansari does have a point. Really. People need to get a grip and recognize that equality is needed.
And that Wonder Woman poster is everything!!

Ah I remember marching in the 60's and 70's. Those were special times.

Happy International Women's Day! I've always believed women actually had more rights than men :) Men are expected to die in wars or in hard labour, in mines, constructions, fire and other earthly hells, women even have their international day, men don't :PPP

Men and women are equal.
Black and white are equal.
Gay folks and straight folks are equal.
Get used to it.
Equality.
It's not such a difficult concept.

Cool Wonder Woman "inspirational" poster pic... still dealing with my brother's Family problems...
Wishing you and yours a very pleasant weekend... and Hello from Maarshville

This is probably the wrong thing to say, but those modern-day suffragettes are adorable!

Frankly, I have never understood anti-feminist (or anti-whatever) thinking. Why would you deny anyone's rights? And for those who think that taking someone else's rights leaves more for yourself, that just shows that your whole logical framework is out of whack.
--Jim

It's sad that there are bigots in the world that hate anything that would interfere with their leadership roles. Men are the worst about this but I have seen women like this too. But on to bigger and brighter ideas.

I knew there was a rift within feminism regarding transphobia, but not within the "women's spirituality movement." Forgive my ignorance, but is that the paganism you write about frequently on this blog? Not that it really matters. Transphobia should be opposed, and I'm heartened that you do oppose it.

1973 … I was to be married off to mr ugly by my family. I ran away and hid in a convent for 9 years. 1982 I met and married my Canadian prince in shining armor … That's my own journey to freedom. Thank you, Canada. Happy Women's Day, friend D. and friends. Love, CAT.

Yes we can do it!

I could not agree more. That Tweeter said is right, common sense!

I like that simple definition. Apart from anything else it is just common sense: men and women are equal.

Common sense it is.

@ Kirk -- Yes, transphobia has occasionally been an issue within the feminist movement (for example, in women's shelters and services for domestic abuse) but the big area of dispute today is centred in women's spirituality. The women's spirituality movement is a specific kind of paganism that arose out of feminism and the redefinition of female spiritual experience to focus on the Divine Feminine. It reclaims divine imagery and spiritual truth from being an exclusively male purview (as in patriarchal Abrahamic religions).

Many (although not all) women's spirituality rituals and gatherings are open to women only and focus on women's unique experience of reality. Some in the women's spirituality movement actively exclude transwomen from such gatherings on the basis that they are not "biologically-born women" and do not have "women's life experience." Others (myself included) reject this view and believe instead that transwomen are perfectly "valid" women and their life experience is actually a new form of "women's experience" which should be embraced, not excluded.

There is currently vicious infighting between the two sides of this issue within the women's spirituality movement. It has left me disillusioned with respected leaders who promote transphobic thinking in order to exclude women they regard as inferior.

Having been born in '70, I could say that I have been a feminist for as long as you have. :)

As a third-waver, I recall learning about 2nd wave values & not really jibbing with them. The separatist movement was an interesting development & I don't begrudge those who took that route.

Thanks for sharing the quote by Amy Poehler, I'd never seen it before.

I'm assuming there's an International Men's day too, as we are talking of equality? I'm happy to celebrate both. :D

I'm with you. For me, feminism is all about choice and empowerment. To exclude some, just because they don't think exactly like we think, is not just hypocritical but it also defeats the purpose of the thing.

So, I am a feminist... like Debra. Even if I don't have those cool fingerless gloves she has.

Common sense huh? Wow, that's a concept.
Loved all of this. When I began to call myself a feminist? A very long, long time ago in what seems like a time when woman was spelled girls, chicks, broads, skirts. Yeah long ago than yesterday

Happy International Women's Day! I totally agree with you, Debra. Feminism to me is about men and women being equal. I will continue to march on that road, the one that my daughters will continue on long after I'm gone.

Isn't the definition of feminism "the radical notion that women are people?" I heard that somewhere.

You womens are the best. As Sinatra said, SWING BABY, YOU'RE PLATINUM!

Happy International Women’s Day, Debra! These quotes are all good, but “common sense” says it all!

Feminism, the radical notion that a woman's life is equal in worth to that of a man's. I like to throw that time bomb into the middle of extended family gatherings and watch some people sit there and tilt their heads like puzzled dogs. Not so much for the puzzled people's benefit, but as a lifeline to some of my younger relatives.

...half the time...no..MORE than half the time, I haven't a clue what we are talking about.I had to google transphobia to see what that meant. I am sure it's an age thing....ANYway....
coming by to say HEY...Have a great weekend.

Equality it is ..Amen

Good post. Coming of age in the sixties I've believed in equal rights and respect for all. While I understood the reason for the movement, I was unaware of the many hidden discriminatory policies and laws until I watched the documentary RBG and the movie "On the Basis of Sex".

The first photo was my favorite as it was spot-on

I remember in shrink school tackling the infamous Freudian question "what do women want?"
I thought the answer quite simple : equality with men.

I think about the only thing certain in this world besides taxes is change... some good some bad.... Lots to worry about in our world but I try to focus on the positives every day and pray for a better world to come for my girls. Have a wonderful Sunday!

Belated happy International Women's Day! Love the memes, especially the second and fourth one. Reminds me of what my mum said to a younger woman who claimed not to be feminist.

It was my job to help clean up after meals. My brother was never required to do housework. I can remember, at age 10, protesting that "I wasn't born with dishrags at the ends of my arms." That was 56 years ago. We have made progress.

I am old enough to have seen where you have come from, and it has been a remarkable trip.
An all woman spacewalk controlled by an all woman staff at NASA.
Congratulations
the Ol'Buzzard

I've considered myself a feminist for many years. Some women look askance at me. I think they are afraid of the word.

I'm no fan of transphobia in any form, but there is something especially deflating when it comes from feminist spirituality (or feminist in general) circles. Still, I'm all for common sense and equal rights. Onwards and upwards!

Onwards and upwards! Yes! Deb, thank you for writing to "Kirk" in the comments. I was going to ask you a question, because I wasn't understanding, but now I do. Big Hugs!

i am not in favor for sexuality among same genders of any kind Debra ,this is unnatural and anything against nature is trivial and brings destructive consequences

happy women's day to you to my dear friend!
it is great to know you
hugs!