Are You a Fan of Michigan J. Frog Too?

When my sister and I were kids in the 1960s, one of our most favourite cartoons shown repeatedly on TV was One Froggy Evening. This 1955 Warner Brothers' cartoon was the epic saga of a singing frog who never sings when other people are around, thereby thwarting his hapless owner's exploitative dreams of wealth. We would laugh ourselves sick over this cartoon every single time!
YouTube doesn't appear to have the full cartoon available for download, but here's a video compilation of all its songs, which also illustrates the basic plot progression.
The original cartoon does not give the singing frog a name, but the character was so enduringly popular that he was subsequently christened "Michigan J. Frog."
So when I took that "Whimsical Creatures" art course in the fall, how could I resist making this greeting card and sending it to my sister? 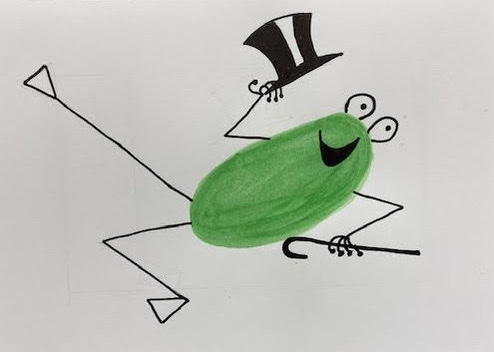 Labels: Down Memory Lane, My Artwork

Oh-How funny! I have never heard of him and pretty sure he was aired in my area. Don't you love revisiting those things from your childhood that gave you so much happiness? Love the card and I bet your sister loved it. xo Diana

You're good at this! I can see a lot of drawings in your future.

I remember that one, it is older than we are

I also adored Bugs Bunny cartoons when I was a kid and Michigan J. Frog was one of my favourites! The only one that annoyed the hell out of me was Tweety, so much so that I always rooted for Sylvester. Good use of your "Drawing Whimsical Creatures" classes on the card -- your sister must have loved it!

The longer I watched, the funnier it became. I hadn’t seen Michigan before.

Love that cartoon and watch it many times.

I, too, remember seeing that cartoon, finding it silly and ridiculous and hilarious.

Never saw that cartoon. I like your rendition of Froggy. But I am reminded of the Andy Divine Show and (“pluck your magic twanger Froggy”) and a mischievous, sometimes evil frog who lived in a grandfather clock…and then there was Midnight the violin-playing Cat…another rather nasty creature…
Now look what you’ve done…my childhood trauma revisited. Maybe that’s why I am not fond of frogs or cats (sorry)!

It is unbelievable, but I never heard of him???
the Ol'Buzzard

Excellent. My sister and I use to watch this too. What memories.

Did your sister get the meaning without reminding her of how it amused the two of you as children?

@ BootsandBraids -- Oh yes, she "got it" right away without any prompting, as I knew she would!

I remember that cartoon! Think I appreciate the music better now than I did then.

LOVED that frog! We used to sing that song a lot around the house when the kids were little, to the point where we had a debate around the correct words. Husband was sure it was "telephone and tell me I'm your own" and I thought, no it couldn't have the word 'telephone' in it, I thought it was "call me and tell me I'm your own". Nope, he was right. I had no idea that the frog had a name, though. -Jenn

I watched the entire compilation with a smile on my face. This was so funny and it is vaguely familiar. Maybe I did see it once or twice as a kid? Who knows, but I love it. Your drawing is delightful and I'm sure it put a smile on your sister's face.

I remember him! Learned his name years later. Typical of my childhood, I always felt sad when I watched him... especially when the guy ended up in the “pyschopathic” house.

Hello Debra, I don't recall ever seeing this frog cartoon, although I have all those old songs on 78rpm records. Your drawing certainly captures his essence, and can also double as a singing pickle in case any of those cartoons come up.
--Jim

OMG that card is awesome!
And I loved the video. Loved. It.

HA! He didn't look at all familiar until he started belting out "Hello my baby...!" I'm afraid I found him irritating. Now, I find him amusing and irritating, but damn endearing. Thank you for the morning boost of chutzpah! (I wonder if he's Jewish. I won't look closer into it.)

I've never heard of the singing frog, but by the video, it must have been hilarious to watch. The card is a very creative and happy reminder of that time. I bet it gave your sister a big smile.

Cute cute card. I've never heard of the frog or the show, I must be older than you. The closest I can get to it is Disney's Singing Jimmy Cricket.

Ain't gonna lie. I loved your drawing, but what I saw was a jalapeno Jelly Belly (my favorite) in vaudeville drag. Cute, too!

It's been a long time since I've seen the frog. Thanks!

I am a big fan. That was a great character. We thought he was really funny. We liked the music. We liked the way he was disobedient. Thanks, that frog is great. Respect, he has survived the test of time.

Definitely way before my time

I didn't remember the singing frog. But when start watching the sing frog it came back.
Coffee is on and stay safe

Directed by Chuck Jones, who also did the Coyote and Roadrunner cartoons, the Wolf and Sheepdog cartoons, the Bugs Bunny-Daffy Duck-Elmer Fudd rabbit-or-duck hunting season cartoons, the Daffy Duck-Porky Pig movie parodies cartoons, and after he left Warner Brothers, the cartoon version of The Grinch Who Stole Christmas. Jones is a hero of mine.

I didn't have a TV (and electricity) until the 90s, so... everything that happened before that is hit or miss for me. I'm so glad your sister and you shared this. I bet the card made her day.

Wow! I didn't know he had a name until now! I learned something.

I remember that cartoon.

Cute card..I'm betting your sister loved it..SOmehow I missed him...Hope you are having a good weekend..

I fondly remember seeing this many times and still enjoy it.

Oh my gosh, I do remember that guy! Blast from the past.

I watched and loved. We never had that here in Australia, we had Tom and Jerry, Bugs Bunny, Roadrunner and others that I can't remember now.

Adorable. I had never heard of him before.

I don't think we had that show but what a cute card!

I loved that cartoon. And as a kid, I would get so frustrated that no one else could see him singing.

My other favorite was the one that had the orange monster that Bugs Bunny drove crazy--especially when Bugs pretended to be a hair dresser and put the dynamite in his hair instead of hair curlers.

I loved that devious frog! All those cartoons were good, at least in my memory. Any opera that I'm familiar with came from watching cartoons...

Fantastic card. I'm sure your sister loved it. :^)

Until it merged with another t.v. network to form the CW, Michigan J. Frog was the mascot to the WB network. In fact, I think he was the first show to be premiered on the network when it began running (not positive on this, so if someone wants to correct me, I will not take offense).

LOL, if someone says "Hello, my baby" I have to respond with "Hello, my honey. Heloo my ragtime gaaaaaaaaal". I was always a big Looney Tunes fan.

What a cute card! I haven't heard of the cartoon before.
xoxo
Lovely
www.mynameislovely.com

"Hello my Honey, hello my baby...." I never saw One Froggy Evening but I remember the singing frog on The Bugs Bunny Road Runner Hour! That's what I watched with my brother when we were kids. So much fun!