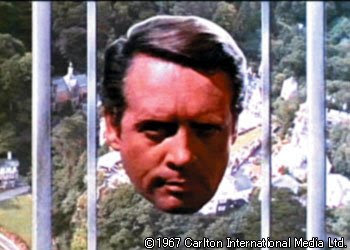 I was saddened to read that the actor Patrick McGoohan died earlier this month. He was, of course, "Number Six" on the 1960s British television series, The Prisoner. I watched that series on CBC when I was a kid and speculated along with everyone else about what the series really meant. Was he being held prisoner by an evil, brainwashing Enemy Government or by -- shudder -- the British Government itself, the ostensible Good Guys? A few years ago, I rented and watched the entire series again on DVD. My theory now (as an adult) is that the series is an incredible depiction of mental illness from the point of view of a mentally ill person (Number Six). He doesn't realize he's mentally ill, of course, so he is paranoid about everyone else's motives and actions. His angry search for "Number One" -- the powerful authority figure who is keeping him a prisoner -- reflects his unwitting split personality. He is himself both Number One and Number Six.

I also read that a remake is currently being done of the series. I hope it is worthy of the original.

Interesting take on the series, I have not watched it since I was much younger.
Welcome back by the way! :)